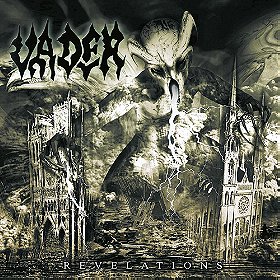 Revelations was recorded between February and March 2002 at Red Studio in Gdańsk, Poland, and was produced by Piotr Wiwczarek. The album was mastered by Bartłomiej Kuźniak at Studio 333 in Częstochowa, Poland. It features guest appearances from Polish metal musicians Nergal of Behemoth, who provides vocals on the track "Whisper", and Ureck of Lux Occulta, who plays keyboards on the tracks "Torch of War" and "Revelation of Black Moses".

CD Smiles added this to a list 1 year, 9 months ago

carnage knowledge added this to wanted list 2 years, 4 months ago