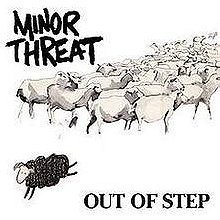 View all Out of Step pictures

Out of Step is a 45RPM 12" LP released by American hardcore punk band Minor Threat. It was first released in April 1983 on Dischord Records. Where the lyrics on their early EPs were an outlet for Ian's "message", the lyrics on Out of Step deal mainly with friendships (or problems associated with them). The original vinyl version of this album is quite different from the one on the Complete Discography compilation; most notably, the guitar on the bridge and Ian's scream at the end of Out of Step are entirely removed from the CD compilation. It is mentioned in the book 1001 Albums You Must Hear Before You Die.
Manufacturer: Dischord
Release date: 1 April 1983
EAN: 0718750709042 UPC: 718750709042
Tags: 1983 (2), Hardcore Punk (1)
My tags:

Aldenvdk added this to a list 4 years, 11 months ago

CD Smiles added this to a list 5 years, 1 month ago