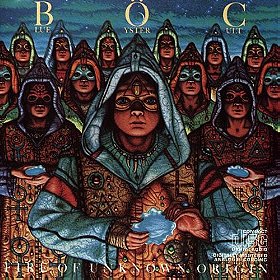 The album, which included the Top 40 hit "Burnin' for You" (#1 on Billboard's Album Rock Tracks chart) represented a resurgence of the group's commercial standing after two albums with disappointing sales. Fire of Unknown Origin would be the final studio LP featuring the band's original lineup; during the subsequent tour, the band fired original drummer Albert Bouchard.

The album continues BÖC's tendency to write quirky songs, from the title track (featuring lyrics by Patti Smith) to "Joan Crawford". Several of the songs were intended for the soundtrack of the animated film Heavy Metal, such as "Vengeance (The Pact)," the lyrics of which follow in detail the plot of the "Taarna" segment of the movie. However, only the song "Veteran of the Psychic Wars" (ironically not written for the film), co-written by science fiction author Michael Moorcock, ended up in the film's final version and soundtrack.

Gauntlet voted for an image 1 year, 2 months ago

ElRaiser added this to a list 3 years, 1 month ago
My vinyls collection! (100 music items)

rollcallaction rated this 6/10 3 years, 2 months ago

José Lopes added this to list 3 years, 9 months ago

"FIRE OF UNKNOWN ORIGIN (1981) BLUE ÖYSTER CULT SO LITTLE IS DISCUSSED about this iconic album from the BÖC. I only just recently decided to check it out, after being so highly recommended by Listal. I couldn't have been more pleased by the result I got, the themes and tone seem to fit right up my alley. Unfortunately, since I wasn't exposed much to music from the '80s growing up, my familiarity with what some hail as Blue Öyster Cult's 'finest hour' is limited to what I've learned (rather th"