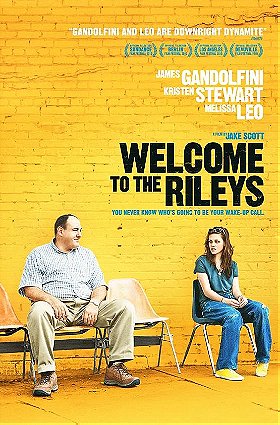 View all Welcome to The Rileys lists (48 more)

Welcome to The Rileys Videos

View all Welcome to The Rileys videos

2 votes
View all Welcome to The Rileys pictures (58 more)

johanlefourbe
I wasn’t sure what to expect from this flick but since there was a pretty good cast, I thought I might as well give a try. First of all, it was really nice to see the late James Gandolfini playing the lead for once. The guy was definitely a fine actor and he was probably the best thing in this movie. On a sidenote, the whole current wave of impressive TV shows on HBO but also on other US channel... read more
View all Welcome to The Rileys reviews

WELCOME TO THE RILEYS is a powerful drama about finding hope in the most unusual of places. Once a happily married and loving couple, Doug and Lois Riley (James Gandolfini and Melissa Leo) have grown apart since losing their teenage daughter eight years prior. Leaving his agoraphobic wife behind to go on a business trip to New Orleans, Doug meets a 17-year-old runaway (Kristen Stewart) and the two form a platonic bond. For Lois and Doug, what initially appears to be the final straw that will derail their relationship, turns out to be the inspiration they need to renew their marriage.
Release date: 10 November 2010
Tags: Drama (6), (3), New Orleans (2), 2010 (2), Independent (1), Prostitution (1), Stripper (1), 2010s (1), Runaways (1), Strippers (1), Agoraphobia (1), Kristen Stewart (1)
My tags:

Exclusive added this to a list 4 years, 1 month ago
My Favorite Actors: James Gandolfini (21 movies items)

aidra voted for an image 5 years, 6 months ago