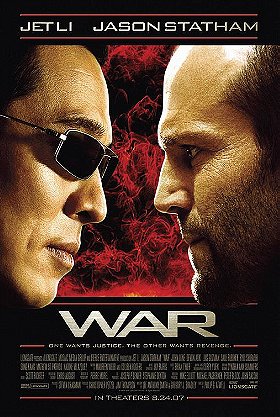 Nothing here but a wasted opportunity...

War (a.k.a. Rogue Assassin) is a standard-issue action movie, featuring guns, violence, explosions, car chases and other cool stuff that makes or breaks an actioner based on style and execution. Alas, the execution and style of War is below-par and unremarkable, hence the end result is a forgettable shoot-'em-up not worthy of repeat viewings. There's one prime... read more

An entertaining film, but bad ending.

The Cinephile
1 vote
This film was very entertaning. Jason Statham did great as usual, and his acting was great as well. Jet Li was not himself, but still showed some talent. His role as "Rogue" was great, and it was really fun to watch. The plot in "War", was good, and basic, but had some great scenes.

There was one huge flaw to this film, and that is the ending. It didn't make any sense, and was frank... read more

johanlefourbe
1 vote
Honestly, I wasn’t sure what to expect from this flick but since I have weak spot for Jason Statham, I thought I might as well give it a try. First of all, concerning Statham, even though the guy has built up a solid career as an action star, in my opinion, his gimmick has become terribly repetitive and it has become pretty much impossible to differentiate his movies which have all started to lo... read more
View all War reviews

jordanwiles94 added this to a list 1 year, 2 months ago

DrLoomis added this to a list 1 year, 4 months ago
Collection (2069 dvds items)

ekimo72 added this to a list 2 years, 2 months ago
My Movie Collection (5158 movies items)

Exclusive added this to a list 3 years, 7 months ago
My Favorite Actors: Jet Li (20 movies items)

Exclusive added this to a list 4 years, 1 month ago
My Favorite Actors: Jason Statham (40 movies items)

Exclusive voted for an image 4 years, 1 month ago

BAMF added this to a list 5 years, 1 month ago

Tumppi added this to a list 5 years, 3 months ago