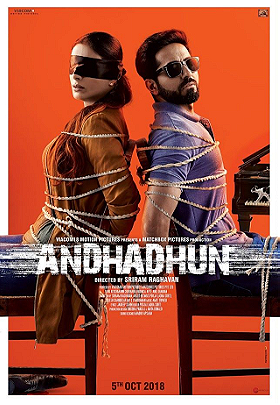 The script of Andhadhun was written by Raghavan, Arijit Biswas, Pooja Ladha Surti, Yogesh Chandekar and Hemanth Rao. The film was edited by Surti, and K. U. Mohanan was its director of photography. Amit Trivedi composed songs for the film and Jaideep Sahni wrote the lyrics. Raftaar and Girish Nakod co-wrote a song as guest composers.

In 2013, Hemanth Rao suggested to Raghavan that he watch L'Accordeur (The Piano Tuner), a 2010 French short film about a blind pianist. Raghavan liked the film and decided to base a script on it. Khurrana was cast in the lead role after he contacted Raghavan and expressed an interest in working with him. The film was shot in Pune in 44 days spread over more than a year; principal photography began in June 2017 and ended on 17 July 2018.

Andhadhun was released by Viacom18 Motion Pictures theatrically in India on 5 October 2018 to critical acclaim. Critics highlighted the writing, and Khurrana and Tabu's performances. It won four awards, including Best Director and Best Screenplay, at the Screen Awards ceremony and five Filmfare Awards, including Best Film (Critics) and Best Actor (Critics) for Khurrana. It also won three National Film Awards: Best Feature Film in Hindi, Best Actor for Khurrana, and Best Screenplay. The film was produced on a budget of ₹32 crore (US$4.5 million) and has grossed over ₹456 crore (US$64 million) at the worldwide box office. ... (more) (less)
Release date: 4 October 2018
Tags: Indian (1)
My tags:

roofer added this to have watched list 3 weeks, 1 day ago

Sylme added this to wanted list 6 months, 1 week ago

Em Zee added this to have watched list 10 months, 1 week ago

A.M.A added this to a list 1 year, 1 month ago
My Greatest Bollywood movies EVER (109 movies items)

tomahawk added this to a list 1 year, 8 months ago
Crime Movies (179 movies items)

tomahawk added this to a list 1 year, 8 months ago
Good movies made in India (105 movies items)

A.M.A added this to have watched list 1 year, 9 months ago