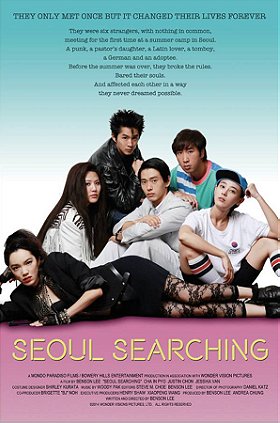 During the 1980's, the Korean government created a special summer camp for "gyopo" or foreign born teenagers where they could spend their summer in Seoul to learn about their motherland. While the intentions of the program were honorable, the activities of the teens were not. The program was eventually cancelled after a few years because the government simply could not control the youth. Seoul Searching is a teen comedy and coming of age film, based on a true story about one of the summer camps that took place in 1986.
My tags:

salappa added this to a list 3 years, 10 months ago

Riikka added this to a list 4 years, 4 months ago

hiyamugi added this to wanted list 4 years, 6 months ago