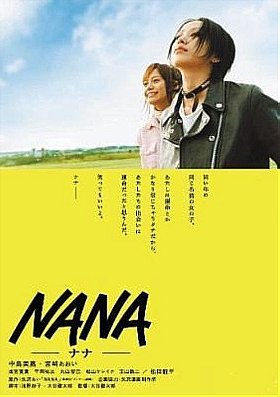 tartan_skirt
1 vote
I had no idea before watching that this also existed as a manga series and an anime series. Nana tells the story of two girls with the same name meeting and forming an unlikely friendship. The two central characters (Nana and Nana) are very different but they compliment each other well. The acting was good throughout, and the characters believable. I enjoy watching movies about music, though I did... read more

Jan Go
1 vote
This is a live version adaptation of the popular Manga and Anime series about the lives of two girls both named Nana. This movie focuses more on the singer Nana Osaki, followed by a sequel which is mainly about the other Nana.

Having watched the anime beforehand (around 40 episodes.) , I must say the live adaptation somewhat had me disappointed. Despite reasonable performances by th... read more
View all Nana reviews

Henny voted for an image 2 years, 6 months ago

singurownsong added this to a list 4 years, 7 months ago
mymovielist (147 movies items)

PreciousLittleNancy added this to a list 5 years, 2 months ago