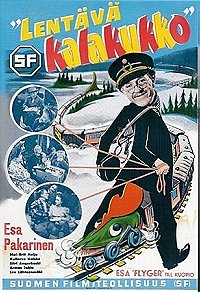 Mustanaamio7 added this to a list 3 weeks, 6 days ago

"24.6. 2021 After a failed burglary, three clumsy criminals decide to escape to Kuopio from Helsinki by train but an annoyingly clever conductor keeps causing them lots of problems. The title of the film "Lentävä kalakukko" refers to the train presented in the film. "Kalakukko" is actually a traditional Savonian food and "lentävä" means "flying". The film is a pretty generic musical and all in all a very typical Finnish film of its time. The most significant thing about the film is the theme"

ritardandy added this to have watched list 4 years, 5 months ago