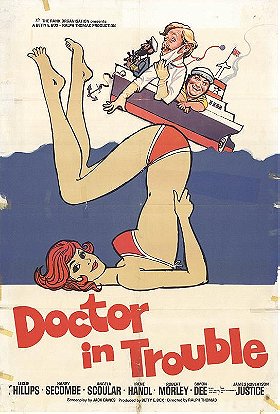 Doctor in Trouble is a 1970 British comedy film, the seventh and last film in the Doctor series. It was directed by Ralph Thomas and stars Leslie Phillips as a doctor who gets accidentally trapped on an outgoing cruise ship while it begins a round the world trip. The cast was rounded out by a number of British comedy actors including James Robertson Justice, Harry Secombe and Angela Scoular. It was based on the story Doctor on Toast by Richard Gordon.
Release date: 9 May 1972
Tags: Comedy (2), Pools Winner (1), 1970 (1), Sequel (1)
My tags:

Onion Jack added this to a list 2 years, 8 months ago

The Comedy Faces of the Lovely Joan Sims (45 tv items)

Onion Jack added this to a list 4 years ago

"FILMDOCTOR IN TROUBLEReleased: 16 June 1970 Directed by: Ralph Thomas Written by: Richard Gordon, Jack DaviesSir Lancelot prescribes a Mediterranean cruise for an exhausted actor, Dr. Burke accidentally stows away while trying to propose to a model, and a pools winner makes a nuisance of himself at the Captain's table."

rickterenzi voted for 28 images [View All] 4 years ago