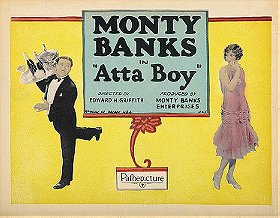 
Monty Milde, a copy boy on a large daily newspaper in New York, dreams of becoming a real reporter. On his birthday, which is April 1st (April Fool's Day), a practical joker tells him he has been promoted to being a reporter, and sends him out to interview Mr. Harrie, who is furious because the newspaper has printed a story suggesting that domestic problems was behind the kidnapping of his young son. Monty goes through several ordeals, including being suspected of being the kidnapper, before he eventually unmasks the real kidnapper and recovers the child.
Release date: 10 October 1926
Tags: Comedy (1), Black And White (1), Crime (1), Silent (1), Newspaper (1), Reporter (1), 1926 (1), Practical Joker (1), Monty Banks Productions (1)
My tags: