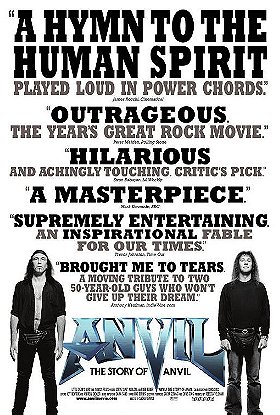 johanlefourbe
The main reason why I wanted to watch this flick was because it was included in the awesome list ‘1001 Movies You Must See Before You Die’. Eventually, this movie would be added in the 2010 version of this book and would be swiftly removed only a few years later but it was still worth a look nonetheless. Anyway, first of all, nowadays, I don't listen much to this kind of music but when I was a... read more

Reea
This movie is about dreams and failure and getting back up and dreaming some more, all accompanied by heavy metal. It made me cry, it made me laugh manically and it made me happy. It’s about having the courage to dream.

Really, watch this here thing. It will make you feel good.
View all Anvil! The Story of Anvil (2008) reviews

Dj Levels added this to a list 5 years, 4 months ago
Movies about Music (51 movies items)

Kristian added this to a list 5 years, 4 months ago

Nusch added this to a list 6 years, 5 months ago
Documentaries about Metal (24 movies items)

moviebuff added this to a list 6 years, 6 months ago
101 Music Movies You Must See Before You Die (101 movies items)