The park was created to protect the prehistoric artifacts and paintings found there. It became a World Heritage Site in 1991. Its head archaeologist is Niède Guidon. Its best known archaeological site is Pedra Furada.

This area has the largest concentration of prehistoric sites in the Americas. Scientific studies confirm that the Capivara mountain range was densely populated in the pre-Columbian Era.

A newer site is Toca da Tira Peia, where the stone tools found may date to as early as 22,000 years ago. The site has been dated through optically stimulated luminescence.

Sitio do Meio is the second most important rock shelter in the area after Pedra Furada. It features fully Pleistocene dates and artefacts. The stone artefacts are better preserved because of the absence of waterfalls here. At least 98 stone tools seem older than 12,500 BP. They belong to the Upper Pleistocenic phase of Pedra Furada 3. 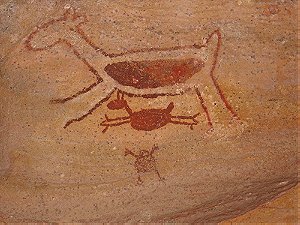 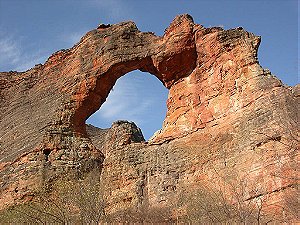 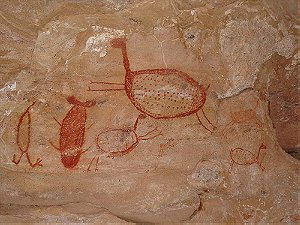 São Francisco Square (Portuguese: Praça São Francisco) in São Cristóvão, Brazil, is an open space surrounded by colonial-period buildings such as the São Francisco Church and convent, the Church and Santa Casa da Misericórdia, the Provincial Palace and other buildings from later periods. The complex is a well-preserved example of typical Franciscan architecture of north-eastern Brazil.

On August 1, 2010 the site, which covers 3 hectares (7.4 acres), was selected as a World Heritage Site by UNESCO. It is managed by a regional office of the National Institute of Historic and Artistic Heritage (IPHAN) and the municipal government. 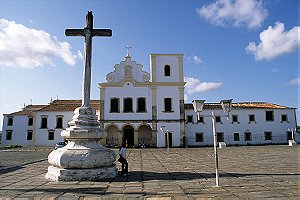 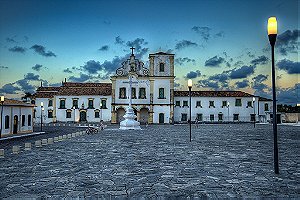 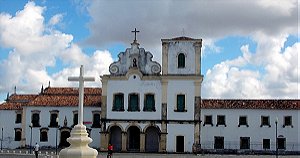 The Pampulha Modern Ensemble (Portuguese: Conjunto Moderno da Pampulha) is an urban project in Belo Horizonte, Minas Gerais, Brazil. It was designed around an artificial lake, Lake Pampulha, in the district of Pampulha and includes a casino, a ballroom, the Golf Yacht Club and the Church of Saint Francis of Assisi. The buildings were designed by the architect Oscar Niemeyer, in collaboration with the landscape architect Roberto Burle Marx and Brazilian Modernist artists. 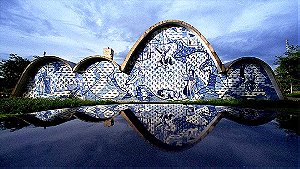 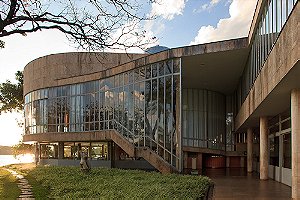 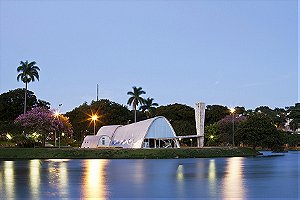 Olinda is an historic city in the Brazilian state of Pernambuco, located on the country's northeastern Atlantic Ocean coast, just north of Recife and south of Paulista. It has a population of 397,268 people and is one of the best-preserved colonial cities in Brazil.

Olinda features a number of major tourist attractions, such as a historic downtown area (World Heritage Site), churches, and the Carnival of Olinda, a popular street party, very similar to traditional Portuguese carnivals, with the addition of African influenced dances. Unlike in Rio de Janeiro and Salvador, in Olinda, admission to Carnival is free. All the festivities are celebrated on the streets, and there are no bleachers or roping. There are hundreds of small musical groups (sometimes featuring a single performer) in many genres. 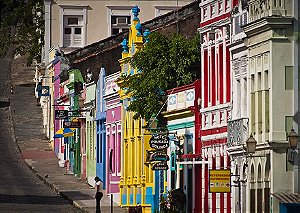 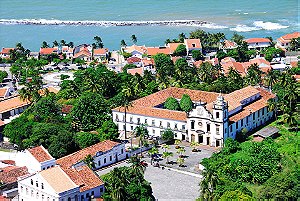 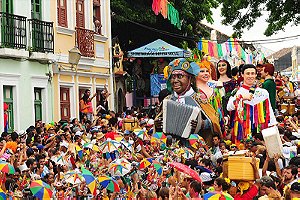 Goiás (also known as Goiás Velho, Old Goiás) is a municipality in the state of Goiás in Brazil. Its population was 24,439 (2015) and its area is 3,108 km². It is the former capital of the state and preserves much of its colonial heritage.
It was the old state capital of Goiás until 1937, when the government seat was transferred to the recently built Goiânia. It was founded by the famed Bandeirante explorer Bartolomeu Bueno da Silva, nicknamed the Anhangüera, and was called in colonial times Vila Boa de Goyaz ("Goyaz nice town" in archaic Portuguese). Given its historical importance, the historical center of Goiás was included on UNESCO's World Heritage list in 2001. 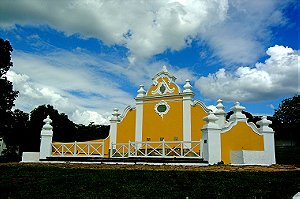 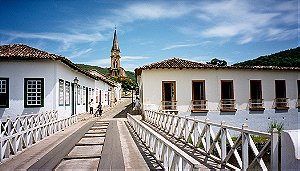 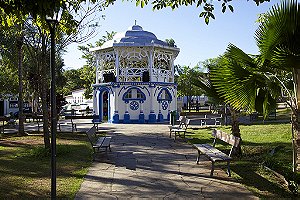 Diamantina is a Brazilian municipality in the state of Minas Gerais. Its estimated population in 2006 was 44,746 in a total area of 3,870 km².

Arraial do Tijuco (as Diamantina was first called) was built during the colonial era in the early 18th century. As its name suggests, Diamantina was a center of diamond mining in the 18th and 19th centuries. A well-preserved example of Brazilian Baroque architecture, Diamantina is a UNESCO World Heritage Site. 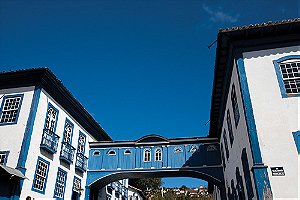 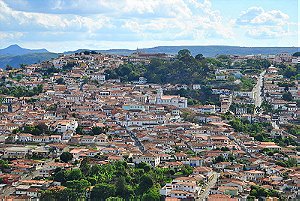 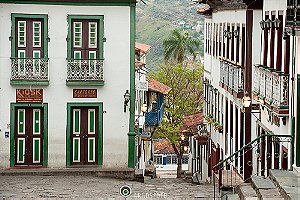 São Luís is the capital and largest city of the Brazilian state of Maranhão. The city is located on Ilha de São Luís (Saint Louis' Island) in the Baía de São Marcos (Saint Mark's Bay), an extension of the Atlantic Ocean which forms the estuary of Pindaré, Mearim, Itapecuru and other rivers. Its coordinates are 2.53° south, 44.30° west. The city proper has a population of some 986,826 people (2008 IBGE estimate). The metropolitan area totals 1,227,659, ranked as the 16th largest in Brazil. 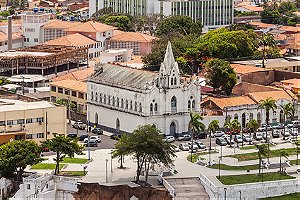 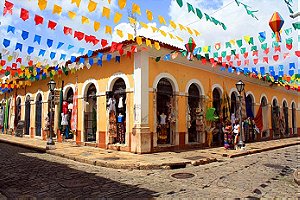 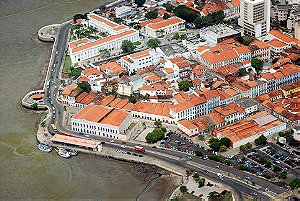 Founded by the Portuguese in 1549 as the first capital of Brazil, Salvador is one of the oldest colonial cities in the Americas. A sharp escarpment divides its Lower Town (Cidade Baixa) from its Upper Town (Cidade Alta) by some 85 meters (279 ft). The Elevador Lacerda, Brazil's first elevator, has connected the two since 1873. The Pelourinho district of the upper town, still home to many examples of Portuguese colonial architecture and historical monuments, was named a World Heritage Site by UNESCO in 1985. The city's cathedral is the see of the primate of Brazil and its Carnival celebration has been reckoned as the largest party in the world. Salvador was the first slave port in the Americas and the African influence of the slaves' descendants makes it a center of Afro-Brazilian culture. The city is noted for its cuisine, music, and architecture. Porto da Barra Beach in Barra has been named one of the best beaches in the world. Itaipava Arena Fonte Nova was the site of the city's games during the 2014 Brazilian World Cup.

Salvador forms the heart of the Recôncavo, Bahia's rich agricultural and industrial maritime district, and continues to be a major Brazilian port. Its metropolitan area, housing 3,953,290 people (2015) forms the wealthiest one in Brazil's Northeast Region.
The main escarpment forms the boundary between the sea-level littoral and the inland plateau (planalto), which has a mean altitude of 500 to 1,300 metres (1,600 to 4,300 ft). This escarpment is part of the Great Escarpment that runs along much of the eastern coast of Brazil south from the city of Salvador, Bahia. 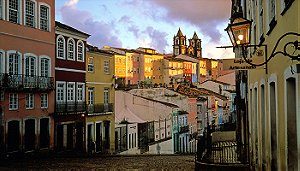 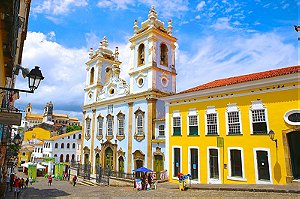 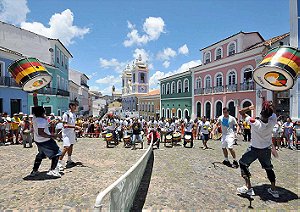 Brasília is the federal capital of Brazil and seat of government of the Federal District. The city is located atop the Brazilian highlands in the country's center-western region. It was founded on April 21, 1960, to serve as the new national capital. Brasília and its metro (encompassing the whole of the Federal District) had a population of 2,556,149 in 2011, making it the 4th most populous city in Brazil.

Brasília was planned and developed by Lúcio Costa and Oscar Niemeyer in 1956 in order to move the capital from Rio de Janeiro to a more central location. The landscape architect was Roberto Burle Marx. The city's design divides it into numbered blocks as well as sectors for specified activities, such as the Hotel Sector, the Banking Sector and the Embassy Sector. Brasília was chosen as a UNESCO World Heritage Site due to its modernist architecture and uniquely artistic urban planning. 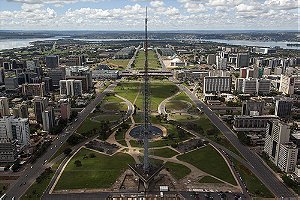 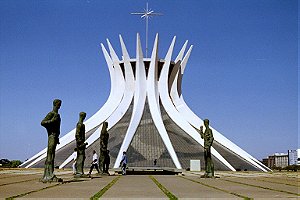 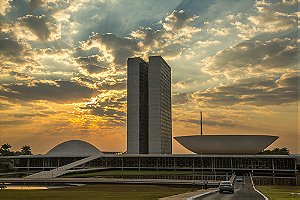 Ouro Preto is a city in the state of Minas Gerais, Brazil, a former colonial mining town located in the Serra do Espinhaço mountains and designated a World Heritage Site by UNESCO because of its outstanding Baroque architecture.

Ouro Preto is located in one of the main areas of the Brazilian Gold Rush. Officially, 800 tons of gold were sent to Portugal in the XVIII century. Other gold circulated illegally, and still other gold remained in the colony to adorn churches and for other uses. 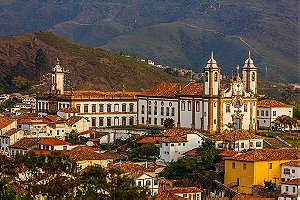 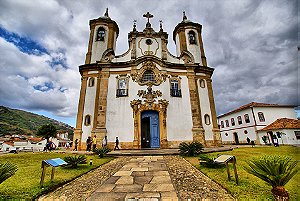 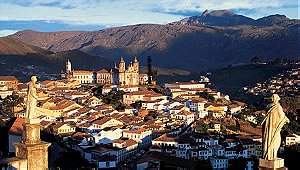