Compared to the first film, Iron Man 2 was a disappointment. It lacked the humor, story and character development that was so brilliant in the predecessor and was, quite frankly, a lame build-up to The Avengers. However, now that we have had The Avengers and the trailer of Iron Man 3, it looks like it could become a huge improvement over the second film and possibly be the build-up to another Avengers film that we should have seen. Robert Downey Jr. is absolute perfection in the role of Tony Stark/Iron Man and it’ll be great to see him return again in the role, Gwyneth Paltrow’s beautiful presence again will make it even better too. In addition, Guy Pearce as the primary antagonist is absolutely fantastic! Pearce always plays marvelous villains and anti-heroes, so I believe he’ll do a sublime job in the role of Aldrich Killian. Ben Kingsley plays another antagonist – the Mandarin so there will be even more sophistication added into Iron Man 3. There are places where this third installment could go beyond the previous two. This is not only judging by the visuals but from what was seen in the trailer, Iron Man 3 looks quite a personal film and we could be in for an emotional ride as well as an exhilarating one. Let’s wait until April 2013 and then we’ll find out.
SJMJ91's rating: Remaking horror and science-fiction films are rapidly increasing but are resulting in mass critical and sometimes financial disaster. Still, here we are with yet another one. The original Carrie starring Sissy Spacek and Piper Laurie is one of the scariest and most psychologically deranging films that I have seen but this 2013 remake has a fair share of positivity about it. In the role of Carrie White is Chloe Grace Moretz, the talented child star from Kick-Ass, Let Me In and Hugo, and Julianne Moore will portray Carrie’s mentally unstable Christian fundamentalist mother Margaret. Remakes and sequels have not played kindly to Moore following 1998 film Psycho and The Silence Of The Lambs sequel Hannibal. However, the pale and cold features of Julianne Moore could fit her into Margaret White’s psychotic state and we could be in for a surprise. In addition, Kimberley Pierce who directed Boys Don’t Cry in 1999 can illustrate psychological issues of females and I believe it could actually be a good remake. Still, it’s a remake and we won’t know until we find out. 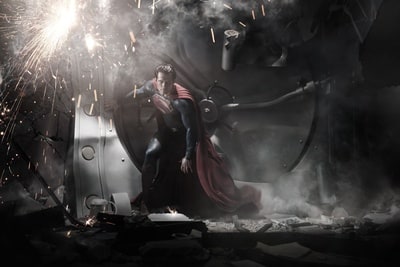 I have never been a huge fan of Superman as I believe he is quite a corny character. Admittedly, the 1978 film was good and Superman Returns was at least a satisfactory return. However, Man Of Steel could become the best installment yet and there are a number of reasons why. First of all, visual artist Zack Snyder is director. No, his films have not been the greatest that we’ll see but this could be the film that makes us all change our minds about him. Besides, many of his films had impressive visuals so we can rely on him, effects-wise. Christopher Nolan is part of the project along with his co-producer and wife Emma Thomas and fellow storyteller David S. Goyer. Following his immensely successful Dark Knight trilogy, Nolan could whip everybody into shape, even Snyder, and reboot Superman to the very highest level. Even the trailers look like there could be a sense of realism about it and Nolan did that so well with Batman. Still, it could be something totally different. You cannot go wrong with the ensemble cast. Henry Cavill is a solid choice to play Clark Kent/Superman, Amy Adams has the almost exact features to pull off Lois Lane, Russell Crowe’s masculine experience in films could help him massively in the role of Jor-El and we get to see Michael Shannon, Kevin Costner, Diane Lane and Laurence Fishburne in roles too. Still, Man Of Steel could be the best installment to date with so much going for it but it could still become a huge mistake.
SJMJ91's rating:

6.5
Sin City: A Dame to Kill For (2014)
Finally after muddling through it, Frank Miller and Robert Rodriguez are now under way with the Sin City sequel. Speculations have risen about what will be included in the sequel that were in the predecessor. It is great that the majority of the cast are reprising their roles and that the film itself is a follow-up from the original comic-book, not one where it’s a cash-grabbing sequel that we see all the time in Hollywood today. Still, although it will have a lot on its shoulders to triumph over the first film, Sin City: A Dame To Kill For seems like it could be a long-awaited sequel that will blow us away.
SJMJ91's rating: 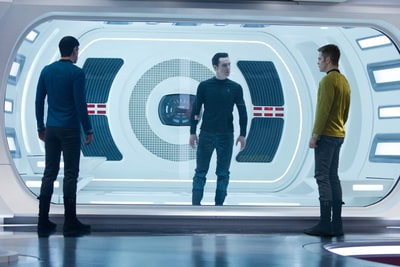 I think most people will agree that Star Trek was a huge surprise and became the reboot that the series really needed seeing as it was going downhill. After how the 2009 film concluded, a sequel was series needed soon. It has taken 4 years to make it and director J.J. Abrams is returning to direct with many of the actors reprising their roles. Also, Benedict Cumberbatch will portray the primary antagonist so that’s making me even more excited to see it. Not many sequels come out on top over their predecessors but after seeing the official trailer, I am sure that we’ll be in for another thrill-ride into the outskirts of space with stunning visuals and action.
SJMJ91's rating: 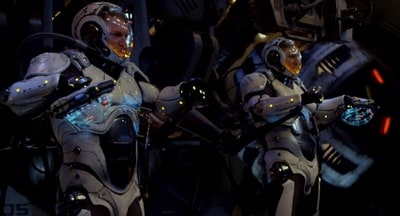 Pacific Rim marks Guillermo Del Toro’s first full-length feature since Hellboy 2: The Golden Army in 2008. This sentence already indicates that the film will gain an audience upon its release and following the trailer, it looks pretty convincing that it’ll deserve it. Judging from reports and glimpses of other footage and still images, Pacific Rim could be Del Toro playing homage to the monsters in classic horror films but, of course, with upgraded visuals. It has the approach that looks simply as a darker version of Transformers but with a ten times better film director but key elements within it make it look like has connections with an alien world. In addition, Del Toro’s departure of The Hobbit was shocking and now that this is supposedly the film that he had decided to work on, Pacific Rim has a lot on its shoulders. Thus, Pacific Rim could be Prometheus of 2013, but hopefully better.
SJMJ91's rating: 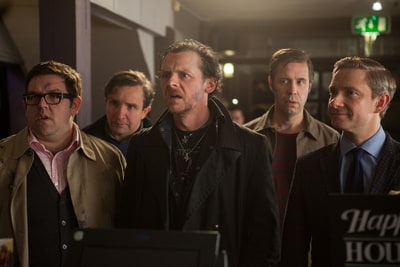 After their hilarious British comedy hits Shaun Of The Dead and Hot Fuzz, Edgar Wright and Simon Pegg return to complete their Three Flavours Cornetto trilogy. Their two past works were part of different genres but contained the same type of comedy through dialogue and violence, which is pretty typical in the UK. So, after reading the plot and getting a glimpse at a few images of The World’s End, it looks like it could achieve the humour that was so hilarious in the previous two films. However, we could be in for the most unusual installment or the most intelligent of the trilogy (or possibly both). Many of Wright and Pegg’s other British collaborators are coming back to work with them, including Nick Frost as Pegg’s fellow leading performer, Martin Freeman who has just finished The Hobbit and Paddy Considine. Being a huge fan of Shaun Of The Dead and particularly Hot Fuzz, I’ll be following this film until it comes out in August 2013.
SJMJ91's rating:

I was beyond surprised by Kick-Ass in 2010. In my opinion, it is one of the most entertaining, hilarious and intense comic book adaptations that I have ever seen. Of course, when we are blown away like that, we want more. So, yet another sequel has been in the works for a while despite the comic book follow-up wasn’t published until after the first Kick-Ass film. Also, it was uncertain about whether Matthew Vaughn was going to return as neither director nor co-writer. Unfortunately, he is not and has been replaced by Jeff Wadlow but he still serves as co-producer. Kick-Ass 2 sees the majority of actors returning including Aaron Taylor-Johnson as Dave Lizewski/Kick-Ass, Chloe Grace Moretz as Mindy MacCready/Hit-Girl and Christopher Mintz-Plasse as Chris D’Amico but as a super villain now called The Mother Fucker. Also, in an absolutely outstanding move, we get to see Jim Carrey in a vital supporting role (possibly the replacement of Nicolas Cage) as he portrays Sal Bertolinni/Colonel Stars and Stripes. The only thing that concerns me is what changes might occur, especially the humour and how it is filmed. Sure it is good to try new things but when it is something like Kick-Ass that’s full of entertainment and laughs; it’s wiser to stay the same and, thereby, avoiding risks. It’ll be released on 19th July 2013 in the UK, 8 days after my 22nd birthday, so it’ll hopefully be a great late birthday present.
SJMJ91's rating: 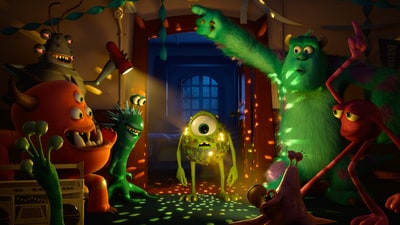 Who didn't love Monsters Inc. when it came out? It was without a doubt the cutest film that I saw during my childhood and after 12 years, it is still a timeless heart-warmer. If there was ever going to be another installment following Monsters Inc, I will be at the cinema to see it in a flash. However, the idea of a prequel sounds really interesting yet at the same time bizarre. It'll tell the story of Mike and Sully at university before they became best friends and worked for Monsters Inc. It actually sounds like a teen-comedy and it sounds quite risky when it comes to making a family prequel. Then again within only a decade, humor in society itself has really changed. I absolutely laughed my ass off at the teaser trailer of Monsters University and that seems convincing enough that Pixar will really get back on their feet again after the flop that was Cars 2 and the slight improvement but empty film that was Brave.
SJMJ91's rating:

Next Christmas we have the second prequel to The Lord Of The Rings and the sequel to The Hobbit: An Unexpected Journey. Although I loved An Unexpected Journey, it did have a few pacing problems and judging from the sequel's title, The Desolation Of Smaug will most likely continue up until Smaug's downfall and will build up to the Battle Of The Five Armies. I’m one of those people who does think that The Hobbit should have been two films, not three, but An Unexpected Journey concluded exactly when I expected it to. I mean, I'm not sure how the remainder of the book will feature two more 150-180 minute films without pacing problems. Still, The Desolation Of Smaug should hopefully be an intense sequel that will fulfill Tolkien's magical world in the book into the film. Against all risks that it has, I'm still so excited to return to Middle-Earth again.. and to see how Smaug turns out through motion-capture!
SJMJ91's rating:

Most anticipated movies of 2013 by moviewatcher122

Most anticipated films of 2013 by the giraffe

Sure, your kids are safe at Hogwarts... by SML96

It's Not Just Background Music by drugs

The Evolution of Matthias Schoenaerts by shia.