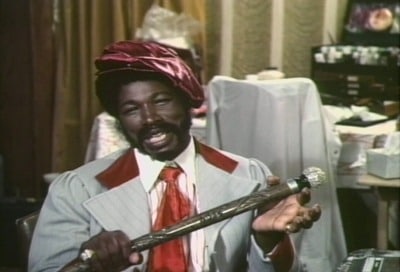 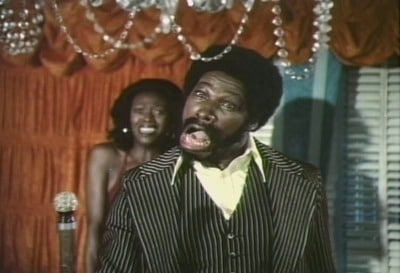 My Holy Grail of bad movies. I get evangelical about it, I show up on doorsteps asking, "Have you heard the good news about Petey Wheatstraw: The Devil's Son-in-Law?"

Rudy Ray Moore plays the titular Petey Wheatstraw. As a child, he's trained by the local martial arts master in a variety of hand-to-hand combat methods and deadly weaponry. Then Petey decides to forget about all of that and become a comedian. And he's such a good comedian (despite the fact that his act seems to be a minute long) that rival comedians are willing to murder his entire family in order to prevent him from doing a show. Petey and his family are brought back to life by the devil under the condition that Petey marries the devil's daughter. Also, he's given a magical pimp cane.

Every single thing about this movie is great. The clothes, the theme song, the plot. From Petey's very casual telephone conversations with the devil to what Petey does with his magical powers to Petey bizarre birth. Easily Rudy Ray Moore's best.
PhineasPoe's rating: 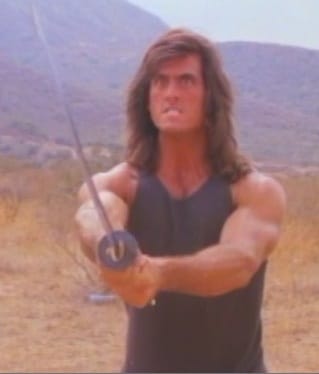 Samurai Cop does everything bad. Especially action scenes. And music. And acting. It's like it was made be high school students and it has their same attitude and perceptions of sex, women, foreign people and homosexuals.

And it is amazing. It's "The Room" of action-comedies.
PhineasPoe's rating: 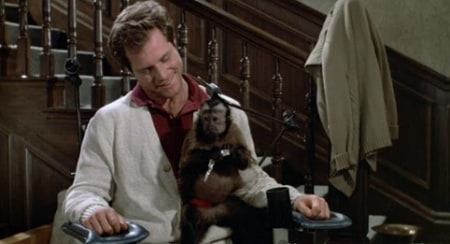 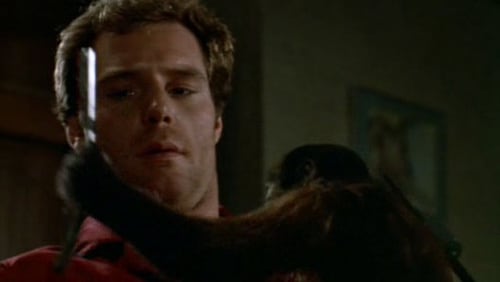 George Romero's Monkeys Shines: An Experiment in Fear never had a chance to be good. A movie about a murderous helper monkey is not something people would buy in to. No matter how good the writer, director or actors are. Even if that murder monkey is super intelligent and feeds off its owner's anger.

The weirdest thing about Monkey Shines is the first half wants to be an emotional drama about a man's struggle to accept his paraplegia and how his life changes when he gets this helper monkey. It could almost be a Lifetime movie. Then the monkey starts killing people and it's great.

Has easily one of the best and craziest endings ever.
PhineasPoe's rating: 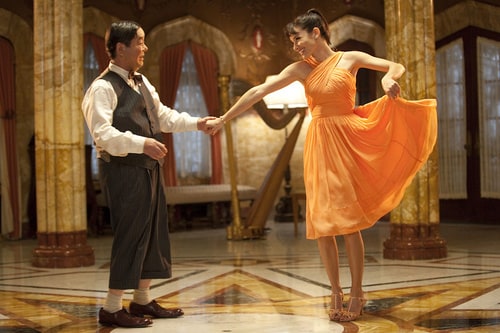 The Last Godfather feels like it's a movie from an alternate dimension. It doesn't seem like it's real. All the elements are real. There's Harvey Keitel, he's been a ton of movies, he's definitely real. And there's a bunch of other known actors. So, why does it feel like my sanity is being eroded by this movie?

Written, directed and starring the writer and director of D-Wars: Dragon Wars, The Last Godfather is about Younggu. Younggu is, let's just guess, a sixty-five-year-old Korean man with extreme mental deficiencies who is the illegitimate son of mob boss Harvey Keitel. Younggu is a bumbler to say the least and has trouble adapting to the gangster lifestyle. He also falls in love with a woman of normal intelligence 40 years younger than him.

It's supposed to be a comedy. So, you'll see some extremely old jokes, a lot of stuff that makes no sense and the slowest physical comedy ever put on film. It's kind of amazing. There's one part that makes me laugh just thinking about it...Younggu does a little dance and falls over some trash cans very slowly.
PhineasPoe's rating: 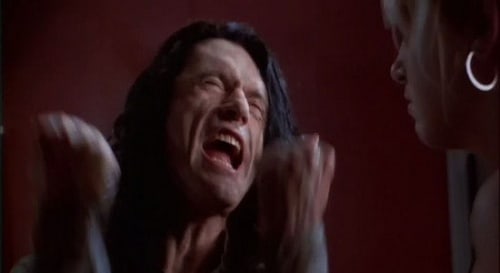 Man, if you're looking at a list about bad movies you have to already know about The Room. If you haven't seen it, go watch it. It's incredible. There's a lot of good-bad action, horror and sci-fi movies, but not a lot of good-bad dramas.

It's like watching someone fall upstairs. They're getting where they're going, but they're fucking up every step of the way.
PhineasPoe's rating:

5
Traxx (1988)
Traxx is the insane story of a cop who gets kicked off the force, becomes mercenary, decides he wants to settle down and bake cookies, then helps rid a town of all its crime.

Traxx actually has a few legitimately funny parts. In fact, if Traxx was more self-aware and the comedy was a little sharper then it would be a movie that is brilliant in its ridiculousness(like Army of Darkness). Fortunately, the stupidity is really strong and the jokes are really bad. Still, it's a great "What the fuck am I watching" movie with a murderous hero. 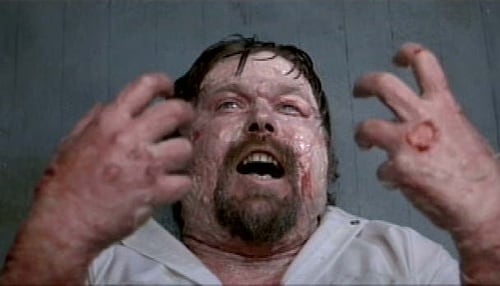 You know what? I think Sleepaway Camp is actually a great movie, unironically. The world does not agree with me. I can kind of understand. The movie looks like shit, the acting is iffy and there's a lot of ridiculous elements.

But, man, I love it. Every costume is fucking ridiculous, it's wildly inappropriate, there's the classic adults-playing-children alongside children-playing-children, the murders range from ridiculous to overly horrific and the end. The end actually unsettled me a little.
PhineasPoe's rating:

This is a movie with TWO super cops. Kurt Russell dresses up as woman and is considered to be beautiful. Teri Hatcher works in a strip club where she doesn't strip, but does play electric drums. We're meant to believe that Slyvester Stallone is a whiz on wall street.

Really, all I need to tell you is that for a few seconds we watch a gun barrel come out of the mouth of a fake dog. Then the fake dog explodes.

Another Rudy Ray Moore classic. This is the timeless story of a cop who becomes a top disco DJ. Then when the scourge of PCP is taking over his neighborhood, RRM comes out of retirement to kick some ass.

The best part is the PCP freak-outs and RRM's bonkers clothing.

A favorite of the Black Dynamite guys.
PhineasPoe's rating: 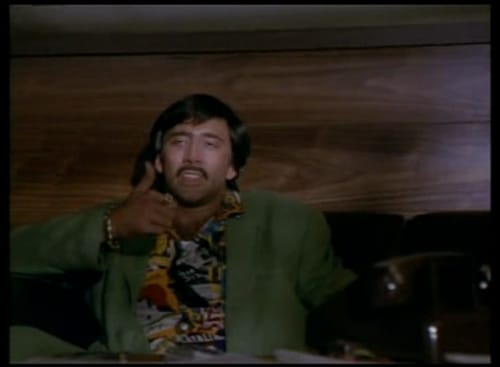 Deadfall is about a man whose father dies and he goes...somewhere to...get some answers? This movie is terrible and boring EXCEPT for the hour Nicholas Cage is on screen. This around Cage's "Vampire's Kiss" phase of talking in ways no one ever does. And it's incredible, playing a loud, crazy looking, crazy sounding madman. He's like a car crash that's happening in every single second.

And after his death (which is also crazy), the movie goes back to being boring. But don't give up yet. Because there's a dude with a metal claw coming up.

Has a 0% on Rotten Tomatoes.
PhineasPoe's rating:

This is another movie that I think is a great movie. I guess it's more of a guilty pleasure movie, because it's thought of more favorably than anything else on this list.

Still, at the end of the day, it's a movie where Clint Eastwood is a bare knuckle boxer and goes looking for his lady love with his orangutan pal. 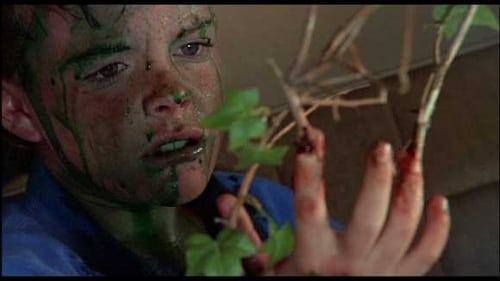 As with The Room, this is a given. An amazing train wreck.
PhineasPoe's rating: 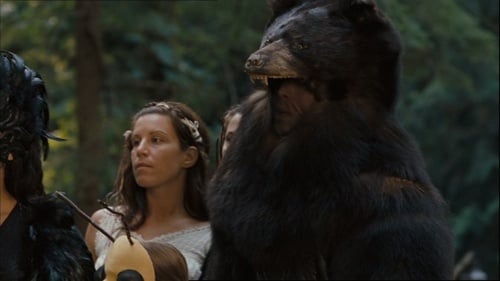 And still another classic. Most remakes drive past what made the original great. Wicker Man 2006 drives off a cliff. Nic Cage meanders about an island for a little while then just starts punching women and generally acting inappropriate.
PhineasPoe's rating: 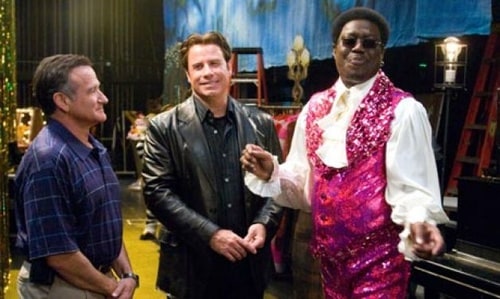 A comedy on the same level as The last Godfather. Just devoid of all logic. It's so misguided, so unfunny, so...bad. Someone, at some point should've stopped this movie. Kind of needs to be seen to be believed.

There's one nice thing about this movie: the beautiful Lori Laughlin.
PhineasPoe's rating:

5.8
Straight to Hell (1987)
When I was, like, 15-years-old, just getting into The Clash I was so excited to watch Straight To Hell. Not only did it have Joe Strummer in a major role, but Pogues' frontman Shane MacGowan (along with other Pogues members) was in it. How could it not be awesome.

Well...it's a fucking mess. And Courtney Love is a major character. But it has its charm. And pretty much everybody dies. So you have that to look forward too.
PhineasPoe's rating:

Criteria: Only movies that are unintentionally ridiculous (or ridiculous in an unintended way) are on the list. So, nothing like the Evil Dead series, no Bubba Ho-Tep, Vampire's Kiss etc.

Watched in 2013 by Grisly Atoms

My Brilliant and Witty 2013 Movie Diary by Severin Severin

I Don't Like Them... But They Do! by Happy Vader

My Countdown to 1000 by PhineasPoe