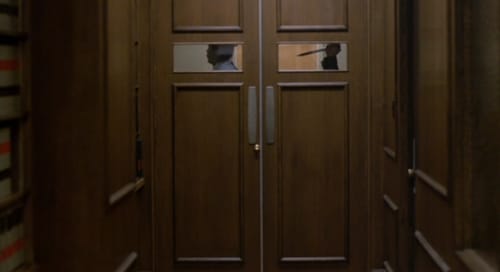 This is a pretty standard slasher flick, with the main difference being that it's about a killer cop. An idea that was scary back in it's day, and feels lifted straight from the headlines nowadays. The story is pretty cheesy, but there's some great kills, a fantastic cast featuring two awesome genre standbys in Bruce Campbell and Tom Atkins and solid direction.
xxxTheRipperxxx's rating: 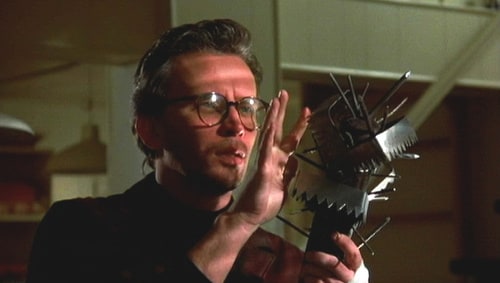 A highly underrated creature-feature about a mutant rat taking over a businessman's Manhattan apartment. This one is beautifully directed and will have you jumping at little noises the whole way through, if you're scared of rodents especially. Peter Weller is great in the lead role and the rat is shown just enough that it looks convincing. Nothing mindblowing, but great entertainment.
xxxTheRipperxxx's rating: 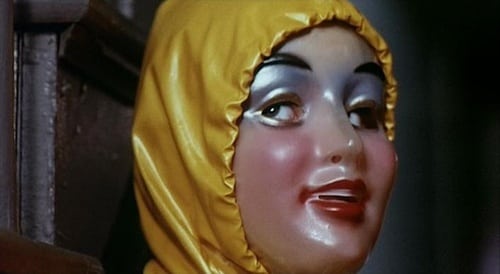 Talk about an underrated film. This is an unsettling, disturbing and surprisingly gory horror flick that was decades ahead of it's time. Direction is fantastic, with an equally good cast and an unexpected twist ending that keeps things fresh. It deserves to be held up with the best of it's day, and if you dig religious horror especially, this one is a treat.
xxxTheRipperxxx's rating:

This a decent ghost story, that sadly takes a very predictable turn towards the end. Still, it's a beautifully directed film, never dull to look at with crisp cinematography and brilliant lighting. Most of the scare scenes work wonderfully as well, and the cast is decent enough. One just wishes that something more had been done with such potential. As it stands, this one is merely worth a look.
xxxTheRipperxxx's rating: 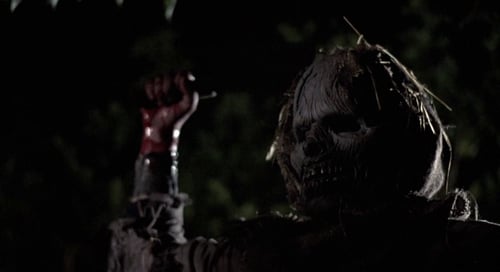 This one has become somewhat of a cult classic, especially because there simply aren't enough flicks about killer scarecrows. Sadly, while not awful, this one is not a superior product. It has very little in the way of story or character and the dialogue is often cringe-worthy. It's obvious that the filmmaker's had a vision, but no meat to hang on it's bones. Thus, most of the film is just sluggish. The scarecrows themselves are convincing, and there's a few moments of memorable gore, but besides that this is a shockingly bland exercise.
xxxTheRipperxxx's rating: 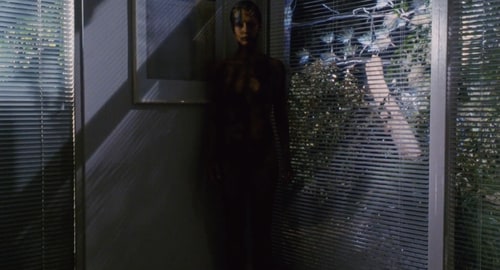 This is one of William Friedkin's biggest failures, touted at the time as his return to the horror genre, nowadays he's flat-out disowned the finished product due to creative differences, troubled production and studio interference. Still, the concept of a magical tree-goddess, posing as a child-kidnapping nanny is an inventive one. But for the most part this is an incredibly ambitious misfire. The concept of the Druid magic never meshes with the real life drama. So we're left with scenes out of "The Hand That Rocks The Cradle" spread with special-effects shots of tree limbs disemboweling people and wolves (inexplicably referred to as "coyotes") chasing people about the surprisingly exotic backyards of Beverly Hills. Friedkin's direction is solid, with several memorable shots, and the performances are decent, but the whole thing never comes together properly, and by the end, devolves into cliché. Worth a look for completists, but not much else.
xxxTheRipperxxx's rating:

The fact that this film is not a sacrilegious, unwatchable disaster is a miracle within itself. This feels like the millionth time someone has attempted to reboot the Halloween franchise, but right off the bat this one feels as though it's being done out of love, rather than greed, which is always a good start. Most were skeptical of the direction of David Gordon Green, who is more well known for his raunchy comedies. But Green has always been capable of delivering serious films as well, and he and co-writer Danny McBride's affection for the source product is more than evident in every frame of Halloween. From shots that are subtle updates on moments from the classic, to pieces of dialogue, there are little homages thrown in everywhere. The film is superbly directed, with Green proving that he is more than capable of sustaining suspense and brooding atmosphere.

Jamie Lee Curtis is really the film's bread and butter though. A phenomenal actress, who's very presence lifts the film every time she's on screen. She is the soul of the film, just as she has been every time she's appeared in a Halloween production. The rest of the cast is good too, with Judy Greer convincing as Strode's daughter and Andi Matichak charming as her granddaughter. But, all of this is not to say the film is perfect. Far from it, in fact. A respectable, serviceable sequel it is, but that's about all. Besides allowing Curtis to flex her acting chops, the story doesn't elaborate much on the franchise mythos, the humor can feel forced and there are a few twists along the way that just feel silly. As well as an ending that is purely disappointing, and feels as though it ties up absolutely nothing. It's a better sequel than this franchise has had in many years, and certainly miles better than that Rob Zombie garbage, but I still think this series should have ended with H20. I'd prefer to think Curtis decapitated Myers back in 1998. If you love Halloween, though, this one at least won't leave you angry.
xxxTheRipperxxx's rating:

This was Eli Roth's first non-R-rated film, and his first stab at doing something family oriented. Needless to say, it's not what fans of his work were anticipating or hoping for, but his last two films were so awful that I thought perhaps stepping outside of his comfort zone may be good for him. And I'm happy to report that this is a fine little film. Perfect for family viewing, lots of fun and effortlessly cute and charming. It doesn't feel like the studio tampered with it too much, either, so the result is a film that feels real, but also aims for the kids without insulting the intelligence of it's audience. The cast is especially wonderful with Jack Black and Cate Blanchett absolutely magnificent as the warlock uncle and the friendly neighbor witch. Young Owen Vaccaro is also good in the main role. The story may be silly, but the characters are drawn well enough that the emotional moments work. The film never becomes scary, but it has some enjoyably spooky special effects. And Roth's direction is as superb as expected, with gorgeous cinematography and good effects work. It's not a masterpiece, just some silly, heartfelt fun for the family, that won't leave the kids wanting for fun and won't leave the adults groaning either.
xxxTheRipperxxx's rating: 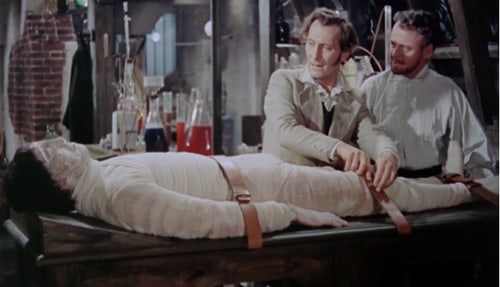 I was none too impressed with Hammer's iteration of Dracula, so I wasn't expecting much from this, their version of Frankenstein, and really, the film that began the Hammer sensation. And while I didn't find it to be a masterpiece, this was a decent version of the Frankenstein mythos. This one focuses much more on Frankenstein himself, and the performance by Peter Cushing is what carries the film. Needless to say, he's amazing in the role. Equal parts sympathetic and blood-curdlingly evil. Robert Querquhart is equally as good as Frankenstein's best friend and mentor. And Christopher Lee does what he can with an incredibly one-dimensional portrayal of the monster. It's partially this stilted portrayal of the famous monster itself that holds the film back. The whole thing amounts to nothing more than a mad scientist film, and a very by the numbers one at that. Still, the great performances make it worth watching for fans of Cushing and Lee, and it's certainly one of Hammer's better efforts.
xxxTheRipperxxx's rating: 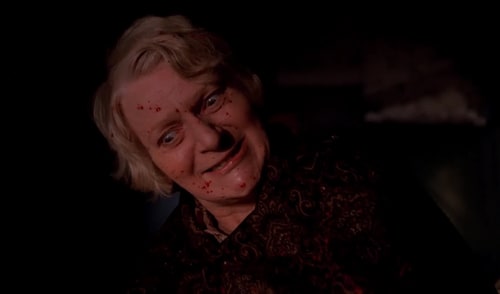 Back in it's day this film was considered to be one of the most shocking of all time, which was no mean feat, being released in the same year as the original Texas Chainsaw Massacre. And for it's time I suppose it was quite a violent, bloody film, especially for such a notoriously censor-heavy country as the UK. But nowadays, it simply doesn't hold up. Director Pete Walker would go on to produce several other cult curiosities, but this is an incredibly uneven film. There's far too much going on with the plot, and Walker has no sense of pacing or ability to cut between the several ongoing plot points. Acting is good, with Sheila Keith in particular standing out as the crazed, cannibalistic old woman. She's convincing and insanely creepy at the same time. But the film's ending is also much too busy, and ends in a freeze-framed, ambiguous moment that does the picture no good and greatly blunts it's impact. Perhaps once this film stirred people up, but it's mostly lost that ability as horror cinema has evolved. Not really worth a look.
xxxTheRipperxxx's rating:

This one has been receiving a very mixed reception, so I was relatively weary of giving it a chance. But we don't get nearly enough medieval horror films, so when a decently produced one comes along it's hard for me to say no. And it wasn't all that bad. It's not perfect, and it's far from original, but the film is directed tightly enough and respectably acted that it's inherently watchable. The cast is not all good, and there's a few bad apples, but leading man Jake Stormden is very good in his role and carries the film wonderfully. The torch-lit Abbey is also a creepy setting for a horror film, with flickering flames and dimly lit corridors leading to some effortlessly scary moments that are sure to get under your skin. Just when the narrative seems to be entering lunk-headed territory, it also throws in a twist that improves upon the entire film. It's really trading one cliché for another, but it works, and leaves the picture feeling as though it has a point to it. Not a perfect film, but a watchable one, even for it's flaws, that you should reap some enjoyment from if you like the sub-genre.
xxxTheRipperxxx's rating:

A horror film starring Sandra Bullock? Sign me up. This one has been creating a stir on Netflix and I had a good feeling about it. First and foremost, this is not a film that will please those looking for cheap jumpscares and instant gratification. It's a very character driven film and the horror is mostly psychological. There are creatures, rather "entities", but you're not going to see what they look like. That's not the point of this film. The point is how real human beings would react in these situations, and the horror comes from what you don't see, and what you feel with all your other senses. The concept really is rather original, especially when you take into account that it was based on a book written long before either, "A Quiet Place" or "The Happening" existed, which some of the more mainstream viewers have been making comparisons between, some claiming outright plagiarism. This just goes to show how educated the average Netflix viewer is.

This is not a perfect film, but it's a very good one. Direction is tight, with some of the more horrific scenes being expertly handled. But, as stated, this is a character driven film, and luckily the cast is pitch perfect. Sandra Bullock is as phenomenal in the lead role as audiences have come to expect of her, and Trevante Rhodes and John Malkovich are equally impressive. The cast is filled with other great actors as well, most of whom make a big impression no matter how small their roles. I would've liked it if a few things had been done differently, and it would've been cool to see the "entities", although I entirely understand why they weren't shown. For the open minded viewer, with patience and intelligence, this is a treat. Don't be afraid to give it a try.
xxxTheRipperxxx's rating:

Watched in Jan 2019 by Hootsaidtheowl

Get Down With OCD! by ChihuahuaDaddy

Movies Watched in 2018 by Aldenvdk

The Best Movies With Owls In 'Em by Haydn, The Salami