The Poenari Castle – The real home of Dracula 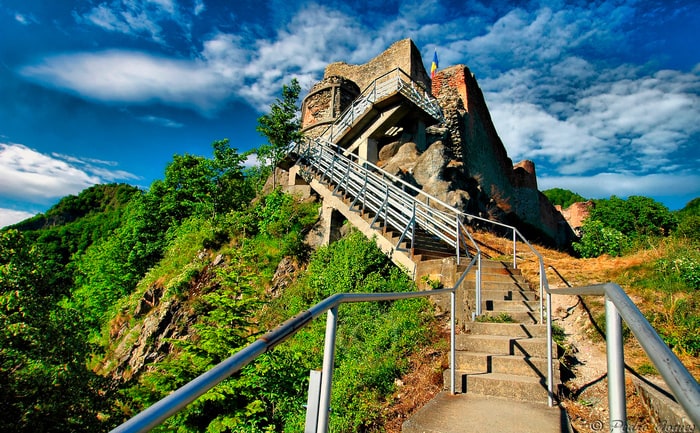 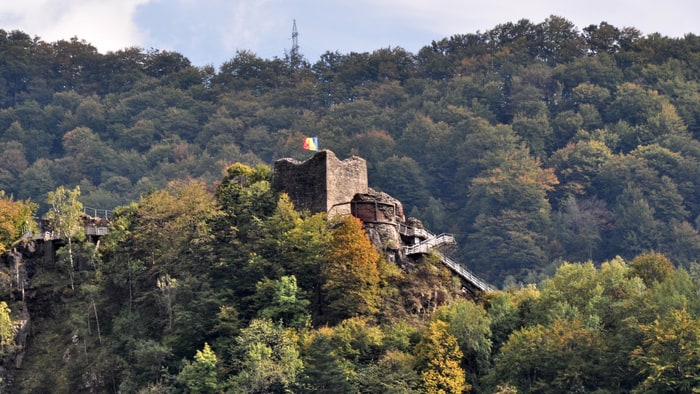 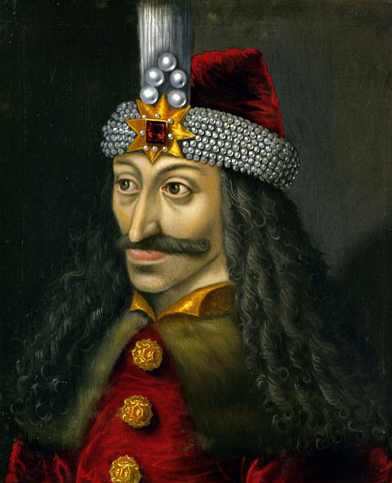 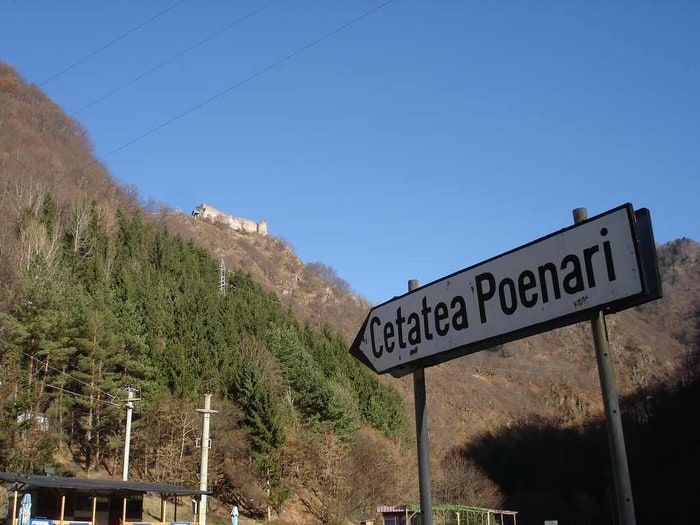 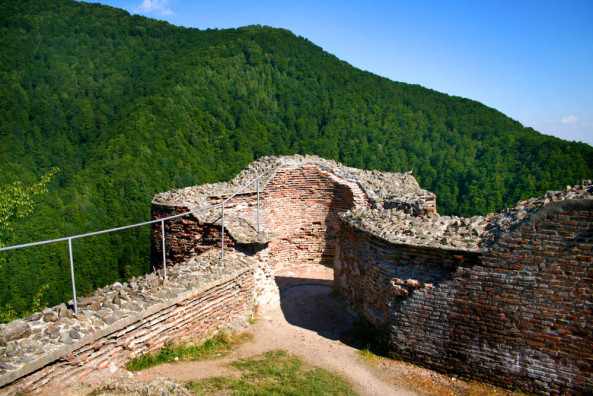 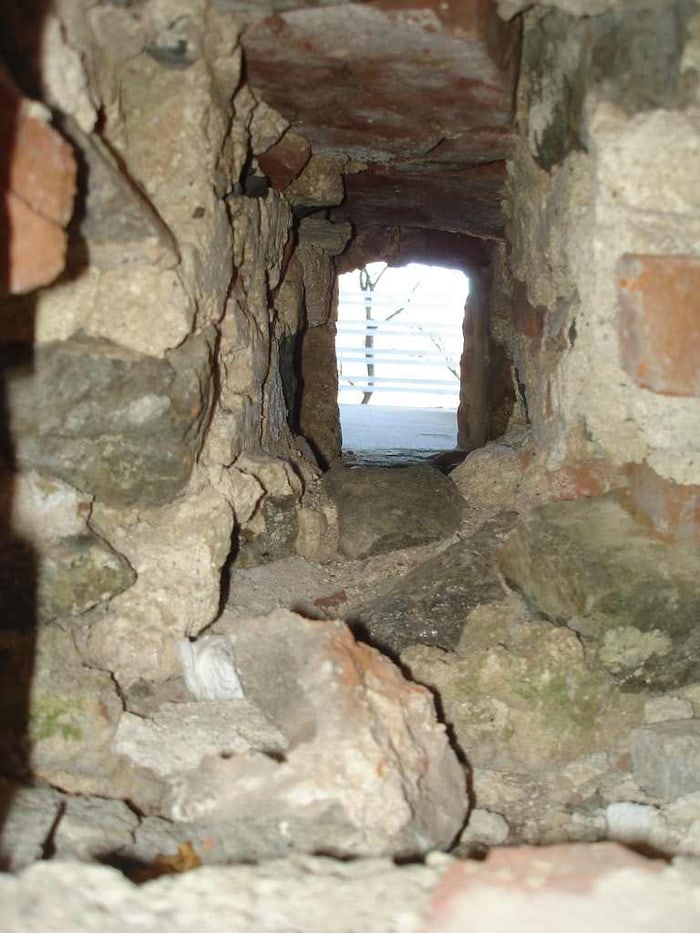 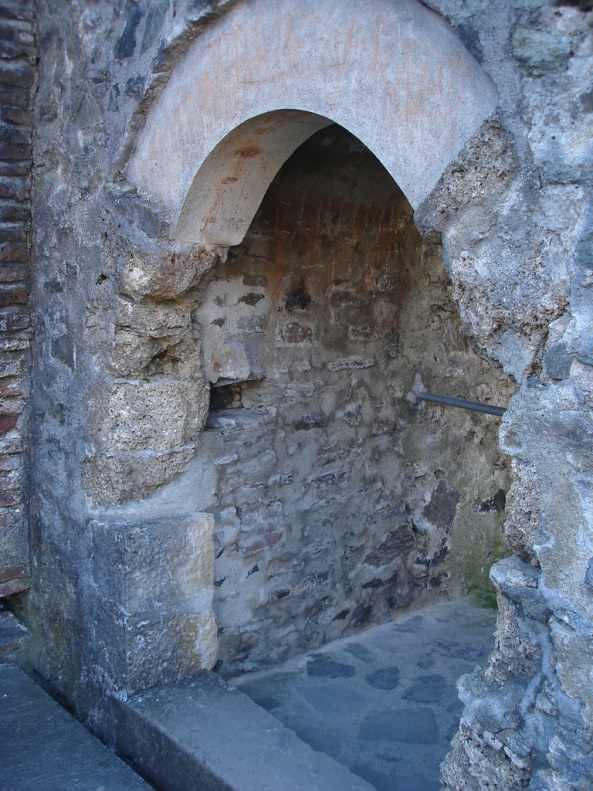 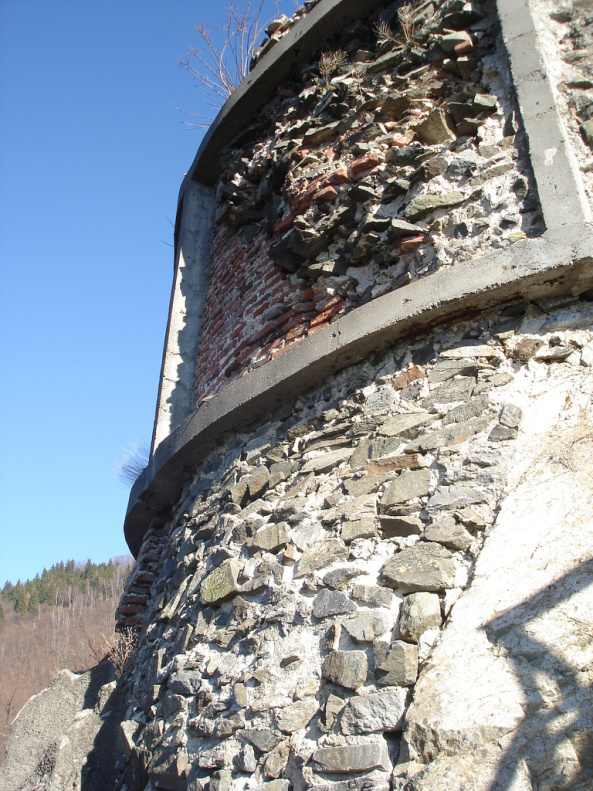 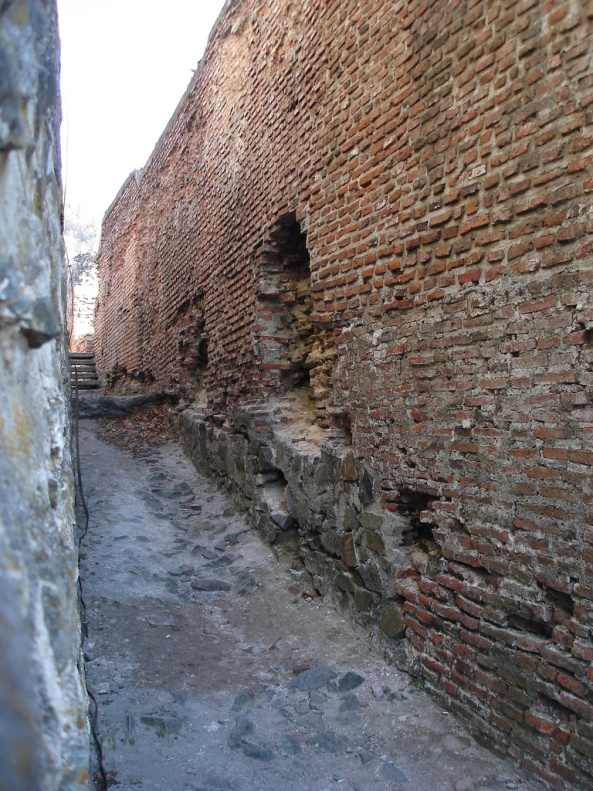 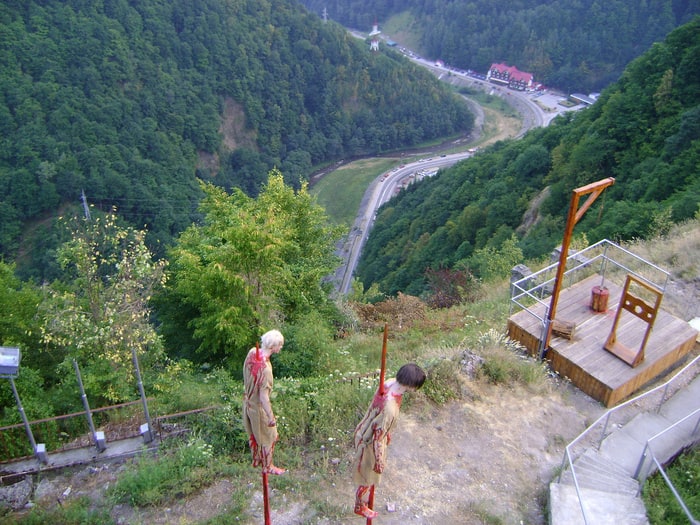 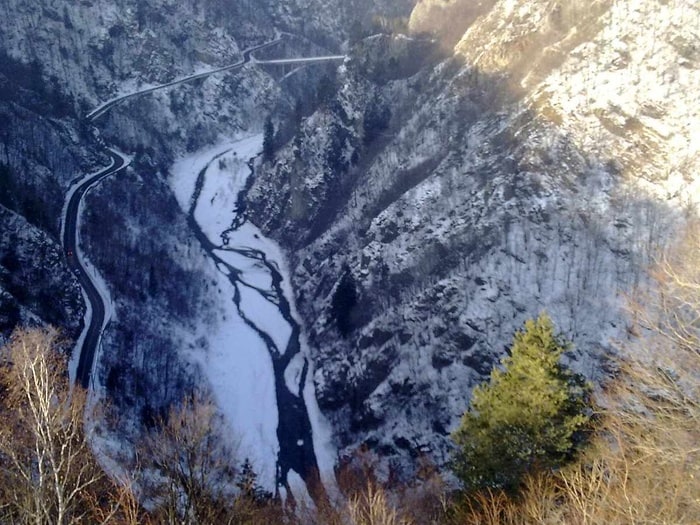 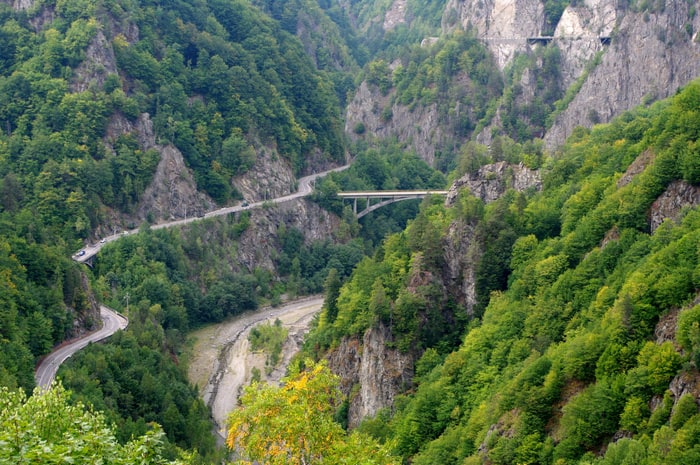 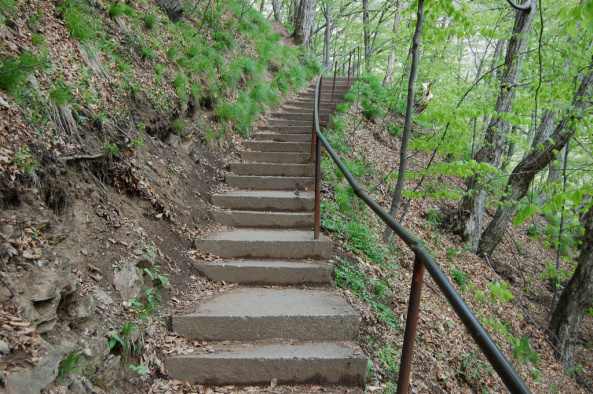 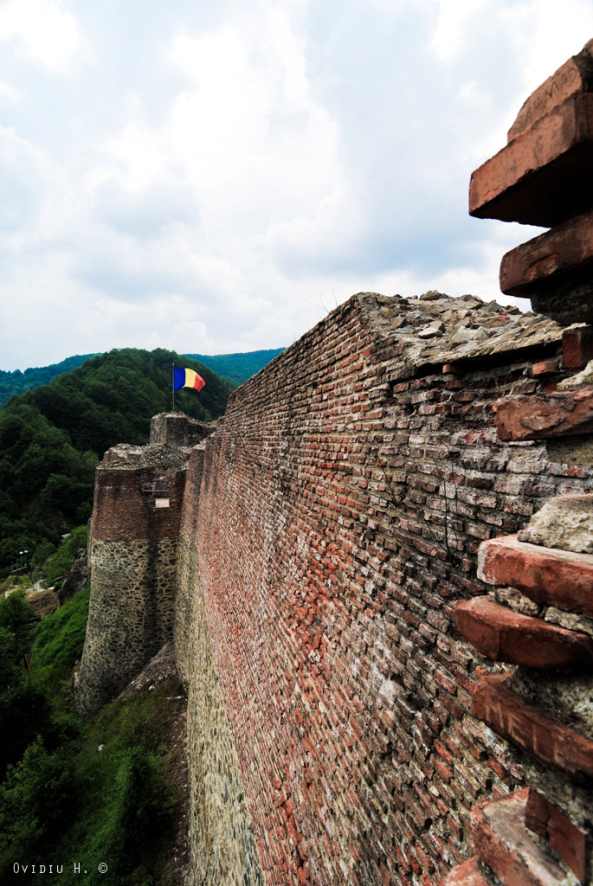 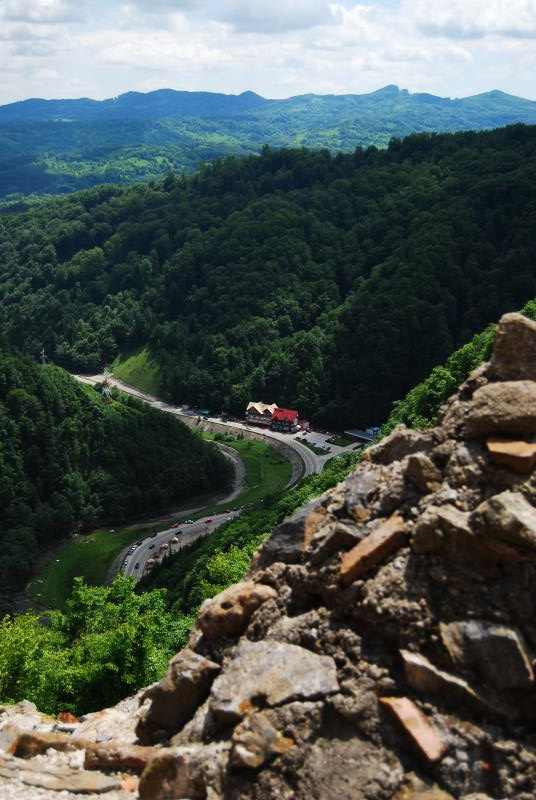 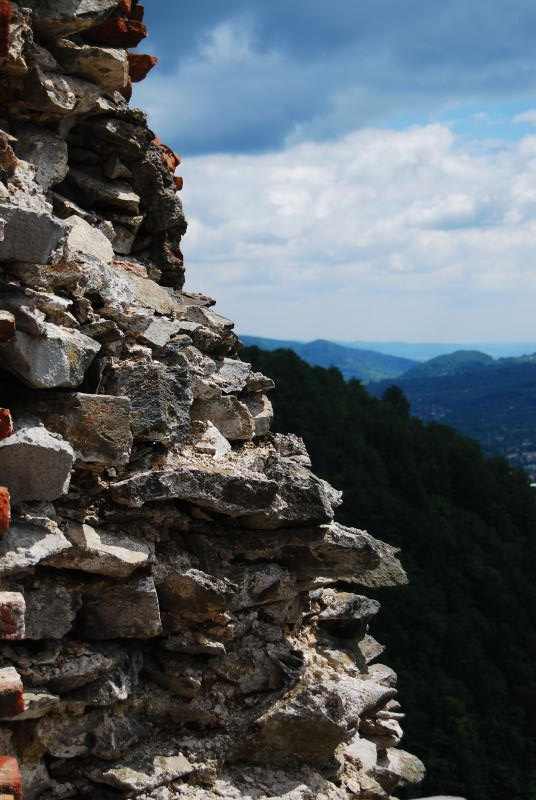 The Poenari Citadel / Poenari Castle / Cetatea Poenari is the Fortress where Dracula’s Legend started, or, more precisely, the castle where Vlad Tepes has lived (it was known also as “Cetatea lui Negru Voda” or “Cetatea lui Tepes Voda”), on the Arges River Valey, close to Fagaras Mountains. The ruined castle is a worldwide attraction, not extensive in size, which stands on a cliff from Fagaras Mountains (860 metters altitude), on the right side of the DN7C (Transfagarasean Road) Pitesti – Curtea de Arges – Vidraru. Some Romanians named the trail ” The great Romanian Wall”, and there is a manageable walk up until the ruins, but need to climb many steps (1480) to reach it.
As you drive on the Transfagarasan road from Curtea de Arges, beyond Capatanenii Pamantani (the last village on the route), the Poienari fortress suddenly appears, almost unreal, hanging on a cliff. And you think: “Wow! I have to see this. To touch it.”
The first Romanian rulers of Wallachia built the Poenari fortress in the early 13th century. We are talking about the rectangular tower (see the plan sketch). Around the 14th century, it was the main citadel of the Basarab rulers. Then, over time, the castle was left in ruins.
The first written proof of its existence is a document from 1453 where the Hungarian king Ludovic the 5th asked the Sibiu people to repair the fortress in order to use it against the Turks’ attacks.
Well, in the 15th century, Vlad Tepes Dracula noticed the huge potential for a fortified castle in such position. He repaired and consolidated the structure (see the second stage on the plan sketch), making it one of his main fortresses.
About the view. It’s marvelous on a clear day. But, look closely to the clouds if it’s not a clear day. It’s an area where the weather changes fast. If the clouds are down and compact and move from the mountains to Curtea de Arges and you still want to climb to the Poienari fortress, your experience will be somewhat different but still memorable.
You’ll have all the chance in the world to find yourself in the middle of a kind of “twilight zone”. It’s a bad thing for the view because, depending on the cloud’s density, you’ll have only a few meters/feet of visibility. This, of course, is good for your imagination about vampires and ghosts – but don’t expect to find such things in the real world of the castle.
As you climb the stairs the light finds its way through the trees with more difficulty. Pay attention to the shadowed stairs because they are not in the best shape. Before 1972, when the stairs were built, it was only a hidden trail here.
The legend of fortress’ building
It is said that a large number of landowners and merchants weren’t satisfied with the manner in which Vlad Tepes (The Impaler) ruled. They formed a conspiracy to catch the ruler and sell him to the Turks. However, Vlad Dracula found out about this plot, planned his own vengeance and acted first.
On Easter Day in 1457 he invited them all to his Targoviste Court to enjoy the holiday. He then trapped them at the religious service in the church and forced them to walk to Poienari. Once there, he raised his sword toward the old fortress ruins and ordered them to repair and consolidate those ruins by Toma’s Sunday (the first Sunday after Easter Day).
It’s hard to believe this can be the truth, but the legend says that the people preferred hard work to dying on a stake. Lots of them lost their lives there but they finished the construction by Toma’s Sunday, as ordered. All those alive were forgiven by Vlad Tepes because he decided they’d learnt their lesson.
The Vlad Tepes escape legend
When the Turks conquered the Poienari Fortress it is said that Vlad Tepes’ wife threw herself from the fortress walls. The ruler escaped through a secret passage (nobody has ever found it) and arrived in the Arefu village.
The villagers advised him to invert the horseshoes and showed him the mountains trails where he could find safety. As a reward, Vlad Dracula gifted the Poienari surrounding lands to those villagers.
In fact, you can see the donation agreement written on a rabbit skin at the National Museum of Romanian History (a very copmlex website, unfortunately only in Romanian language, will open a new window) in Bucharest. He gave them 5000ha/12500acres of wood.
Well, legend or truth, the Poienari Fortress has inspired great stories and played its part in Romania’s history.

Unreal Isolated Houses That Are Breathtakingly.... by Milena

Movies that made me Cry! by winonaraiden

Back to the Seventies by emberlin

Inspired from the 70's disco glam by emberlin

Black and White with Wentworth Miller by PowerGirl

My Top 10 KISS Albums by KISSman