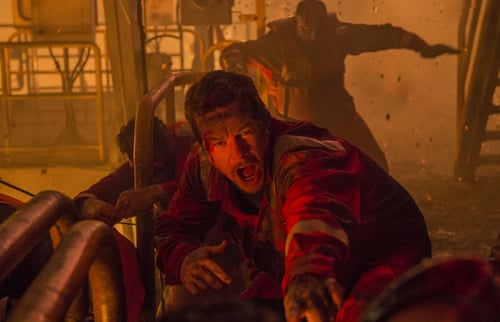 This was a really well-made film that portrays such a tragedy very well. Mark Wahlberg delivers a great performance and the rest of the cast does a great job as well and the way they told this story was the right way to do it. This movie puts all of its focus on the characters and the situation than the Deepwater Horizon explosion itself which is admirable and it goes into great detail on what happened that day. Although it may go into too much detail at times, most of which was in the beginning of this movie. I felt like a few scenes here could've been a bit shorter than they were, but for the most part they did introduce the characters well enough. I wouldn't go far as to call this a great movie, but it is a very compelling one and it's definitely worth watching.
moviewatcher122's rating: 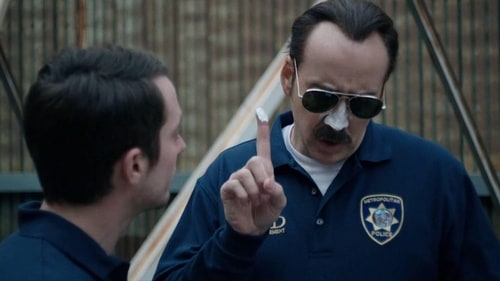 "You just reached for my phone in a suspicious manner."
"No, I didn't."
"That would suggest you're hear under the auspices of illegal activity."

This was one that caught my eye when I was browsing Netflix. The casting of Nicolas Cage and Elijah Wood seemed like an interesting pairing, so I decided to take a chance with this one. It was just OK. It starts off as this pretty generic cop movie and I wasn't really feeling it until the middle where it really started to get interesting and felt like a different movie at this point, but then near the end it started to feel unsatisfying. Because of that the writing is inconsistent. The dialogue is inconsistent and the pacing isn't very consistent. There still are some good things about this movie like Nicolas Cage's performance is actually decent and Elijah Wood is unsurprisingly really good as well. I don't regret watching this movie because it does have it's moments. I just think it could've been polished more.
moviewatcher122's rating: 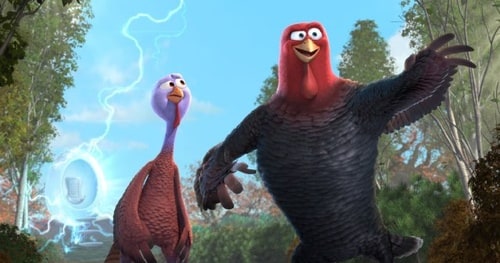 "Do you know what "hypothetically" means?"
"No, but I can imagine a scenario where I might."

So, this got quite the negative reception when it came out and after seeing it I don't think it deserves some of the hate it gets. It's a decent animated film with some good gags, a fun time travel story and the two leading characters were entertaining. I don't really understand why this movie isn't well-liked other than silly reasons like that it's PETA propaganda or something. Well, you could see it as that. In fact that's what I thought it looked like when I saw previews for it, but after watching it I don't think it's trying to be anything more than a silly animated movie with a premise that isn't meant to be taken seriously. Not a great movie by any means, but it's a fun movie and it is not deserving of the low ratings it has.
moviewatcher122's rating: 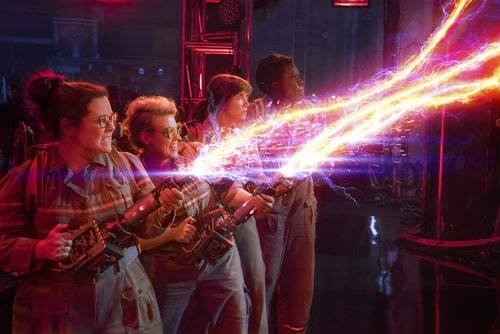 I had no urge to see this when I first heard about this reboot, but the polarizing reception it has gotten has made me curious on what my opinion on it would be. *sigh* I should've kept avoiding it because I hated this movie. I even hated the trailers for it, but a part of me thought that maybe they just advertised it badly. It's not even that the Ghostbusters are women that I have a problem with. I do think Kristen Wiig can be really funny most of the time and Melissa McCarthy is starting to grow on me. I still think she can be annoying at times, but she can be funny and the recent movies I've seen from her weren't bad at all. I'm not really familiar with Kate McKinnon or Leslie Jones, but I'll give all four of these actresses credit because they did their best with the material they were given.

The real problem with this movie is that it was so painfully boring. For the first half of this movie I was bored to death and I didn't find it funny. Hell, I was so bored that I was wondering if this movie was even trying to be funny at times. The humor in this movie was just terrible. The only things that made me laugh/chuckle was Steve Higgins flipping the bird in creative ways and Ozzy Osbourne's cameo. I also thought the inclusion of the Ghostbusters logo as one of the ghosts was pretty clever. Other than that I was stone-faced for the majority of this film. I was dangerously close to giving this movie a 1/10 because it had very little redeeming qualities. However, the second half keeps it from getting the worst rating possible. It did have a few things that I thought were kind of cool and had some interesting ideas. Other than that I just couldn't stand this movie. This Ghostbusters reboot could've worked, but the way it was executed made it a chore to watch. Hopefully they'll put this ghost of a franchise to rest after this bust.
moviewatcher122's rating:

"They say that it was so hot in the city today, grown men were walking up to cops on street corners begging them to shoot them."

I've been wanting to see this movie for a while now and I have to say that it's just as great as I thought it would be. It has a fantastic cast, tons of memorable dialogue and scenes and great acting all around. That one scene in particular with Alec Baldwin delivering this speech was just amazing. While it does fall short of getting a perfect score from me, it is still a great movie that I'd be glad to watch more than once.
moviewatcher122's rating: 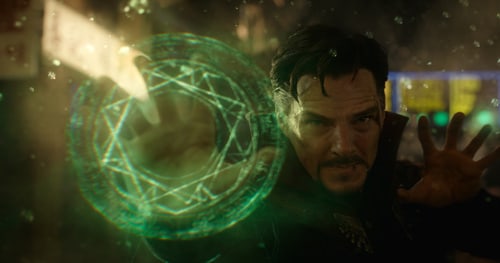 Even though I think the whole superhero movie thing has been over-saturated, I was still interested in this one and it does not disappoint. It is a nice change of pace from some of the other Marvel films we've gotten recently and it has so many great things going for it. Benedict Cumberbatch was an unusual choice to play Doctor Strange, but he pulled it off so well and there were quite a few great characters that made this movie fun. The visuals were stunning at times and there were some funny lines in this movie that really had me laughing. What really makes this movie stand out though is that it focuses more on the characters and story than the action scenes which is great considering the fact that quite a few of the recent superhero films focused mostly on the action.

I'm not sure if I'd consider this one of my favorite Marvel films, but I had a lot of fun with it and it was just a breath of fresh air.
moviewatcher122's rating: 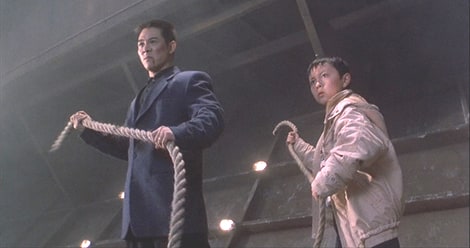 I didn't know about this one until I found it on Netflix and I have to say that it's a solid Jet Li movie. It's really well-acted and the story works even though it's not very original. On the other hand this movie does get ridiculous at times, but it's still a fun movie with some very intense action scenes and it's one of the hidden gems in Jet Li's filmography.
moviewatcher122's rating: 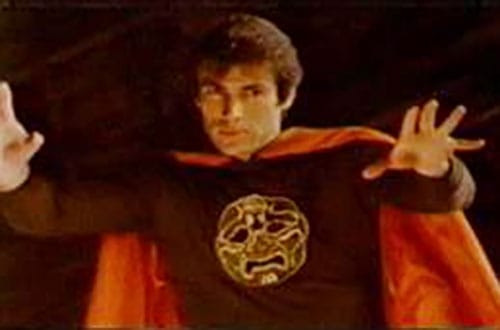 "Have you ever made love in the air?"
"How else would you make little puma men?"

So today there was a MST3K Thanksgiving stream where they showed us six fan favorite episodes of the show and I caught a few of them. This movie was the best out of all of then and one of the better movies they've covered. While it is undeniably cheesy, it was just so ridiculous that it was pretty funny. Whenever I wasn't laughing at the MST3K commentary, I was laughing at the cheesy special effects and acting. It's one of those so bad it's good movies in my book and I wouldn't mind watching it without the commentary someday. 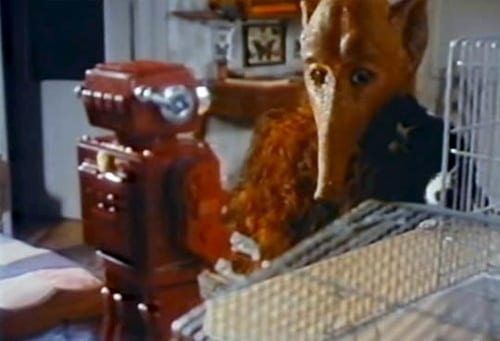 "Trumpy, you can do magic things!"

This movie on the other hand is without a doubt one of the worst movies MST3K has covered and it probably wouldn't have been watchable without the commentary. The way this movie is structured is just godawful. It goes from this badly made sci-fi movie to a terrible E.T rip-off to another badly made sci-fi movie. The way it's paced is also terrible and it has almost no redeeming qualities. It may have a couple unintentionally funny moments, but that's about it. The episode was fantastic though and it is definitely one of the best episodes I've seen so far. 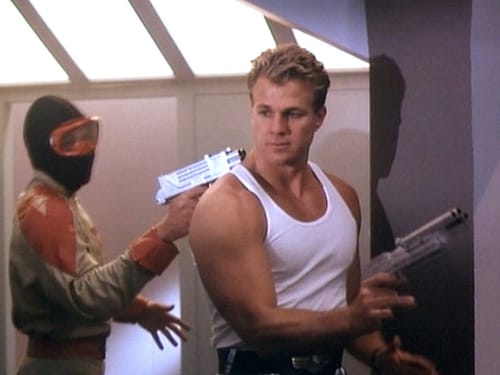 "Surrender, or be blown to astro-dust!"

OK, so I watched half of this movie on the livestream, but then I got so tired that I took a nap and then just watched the rest of it the following day. This movie is pretty bad, but it's more hilariously bad than Extra Terrestrial Visitors. It's a blatant Star Wars rip-off, but there are some hilariously bad moments here and there. It's still terrible, but at least it had some enjoyment. The commentary though is probably the best I've ever seen in a MST3K episode. There were so many clever lines throughout the whole episode and this is just one of the many reasons why I love this show. 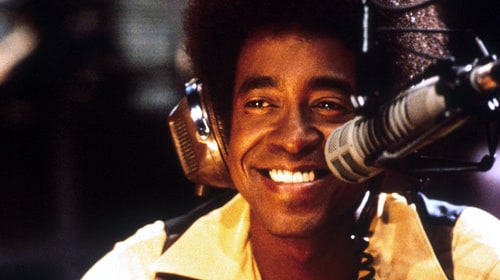 "My name is Leon Phelps, and to those of you that are uninitiated, I am an expert in the ways of love. I have made love to many fine ladies from the lowliest bus station skank to the classiest most sophisticated, educated, debutant, high society... bus station skank."

Most movies based on Saturday Night Live sketches turn out to be terrible, but this is one of these rare exceptions of a good SNL movie. It does rely on stupid humor, but in this case it's good stupid humor. The Ladies Man was a really funny character, but the people that really steal the show is Will Ferrell and his gang. I didn't think I'd enjoy the movie as much as I did, but this is in the same league as The Blues Brothers and Waynes World 1 & 2 which is the good SNL movies.
moviewatcher122's rating: 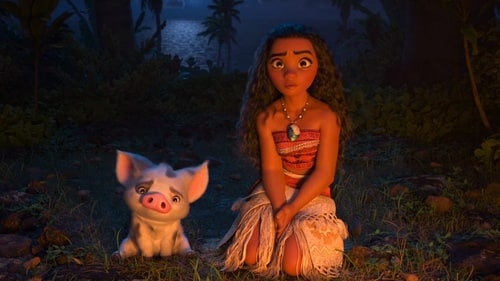 "If I was called Sebastian and had a Jamaican accent, you'd help me."

The animation was breathtaking to look at and the overall setting of this movie is part of what makes it great. The characters are great as well with great voice acting from Auli'i Cravalho and Dwayne Johnson who plays one of his best characters to date. Not to mention that Heihei was the perfect comic relief character since they use him just enough without overusing him. The story of this film does play out like the standard Disney princess movie in certain regards, it still manages to feel different in it's own way. As for the songs, they were not only catchy, but they also serve a purpose to the story which is not something that's common in most Disney films. I just loved everything about this movie and it's easily the best CG Disney film so far.
moviewatcher122's rating:

Yeah, this was later than I expected it to be, but to be fair it was November out of all months. Not many interesting things happen during that month and I was just waiting for December since that's the month I watch the best movies.

Watched in December 2017 by Hootsaidtheowl

Watched in 2014 (October) by DuckNation