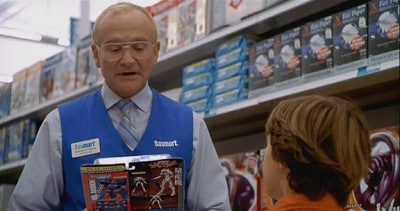 The toy seen in this image is none other than one of the mass produced eva models, as seen in the End of Evangelion.

The toy Jake shows Sy is indeed from Neon Genesis Evangelion, an anime series. It is called a Production Model Evangelion, is much taller than Jake says it is, and is definitely not a "good guy"; it is, in fact, one of many identical models, and is best known in the series for swarming one of the "good guys"' giant cyborgs and eating it. Taken from IMDB
Rate:
Watched Wanted

7.2
Michael Clayton (2007)
Several Evangelion figures are seen in Michael's son's room. One of them is the same figure seen in One Hour Photo
Taken from IMDB
Rate:
Watched Wanted

6.5
Wild Side
When Djamel and Mikhail are lying in bed together the anime being shown on TV is Evangelion.
chibiyusa's rating:

8.2
Fooly Cooly (2000)
I'm sure there's a reference to it somewhere in this brain melting fest.
Rate:
Watched Wanted

Movies that have references to the anime called Neon Genesis Evangelion.

If anyone knows of any others do tell. There can't be THAT many.

Not A Straight Stripe On 'Em by ape

Games with a great story by Neithan