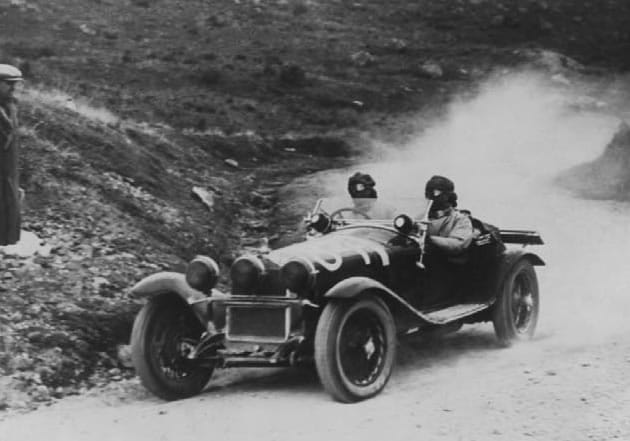 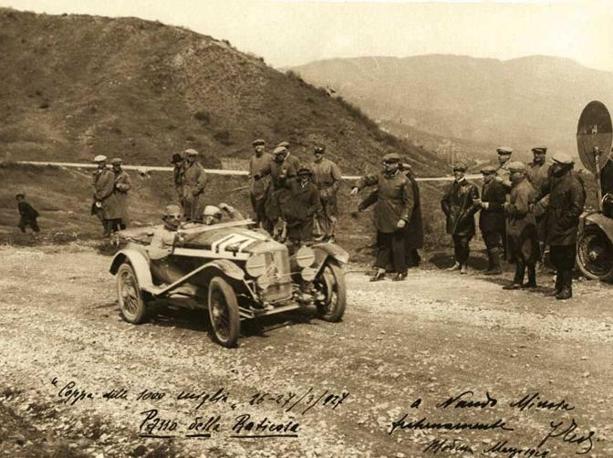 The first winners of the Mille Miglia in 1927: Ferdinando Minoia and Giuseppe Morandi on OM 665 S spyder. 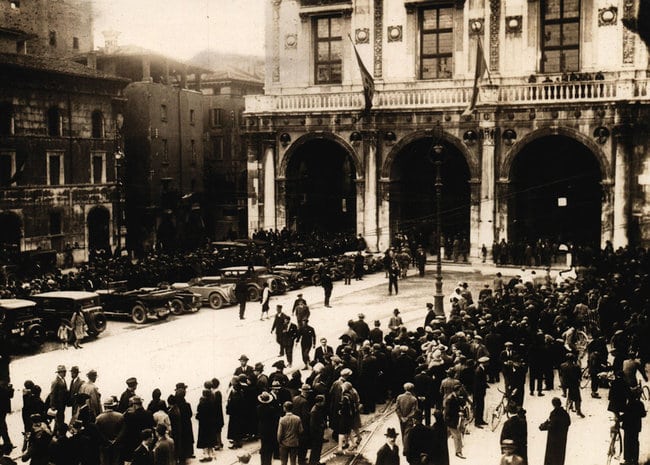 Mille Miglia 1928. The start in Brescia. 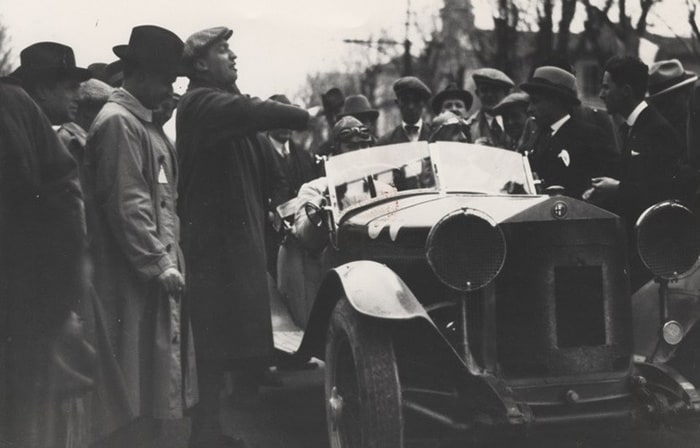 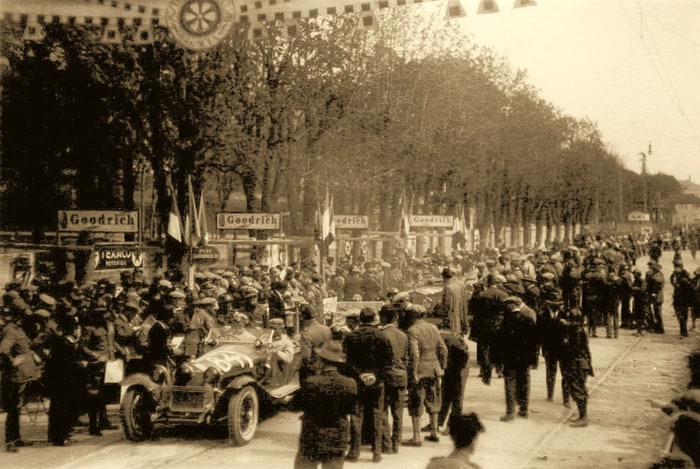 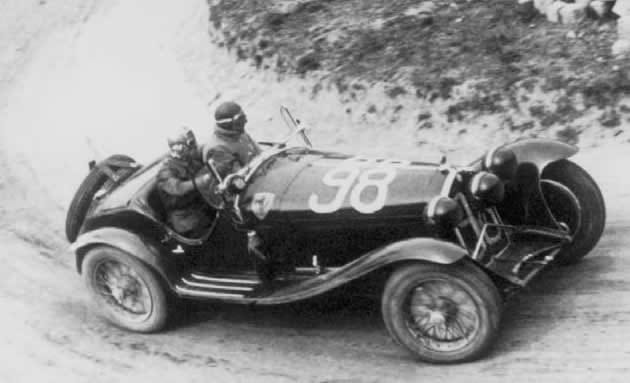 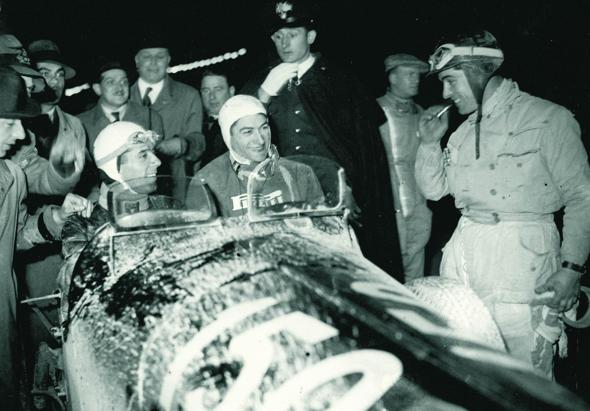 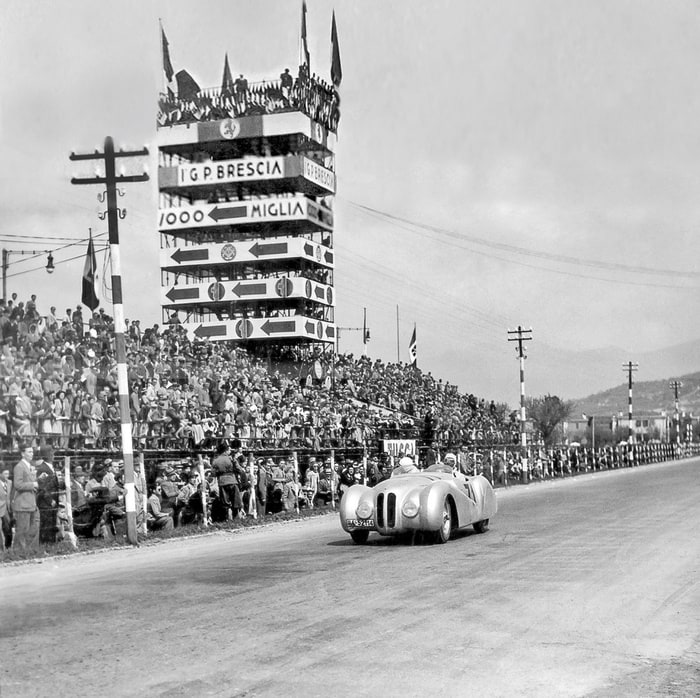 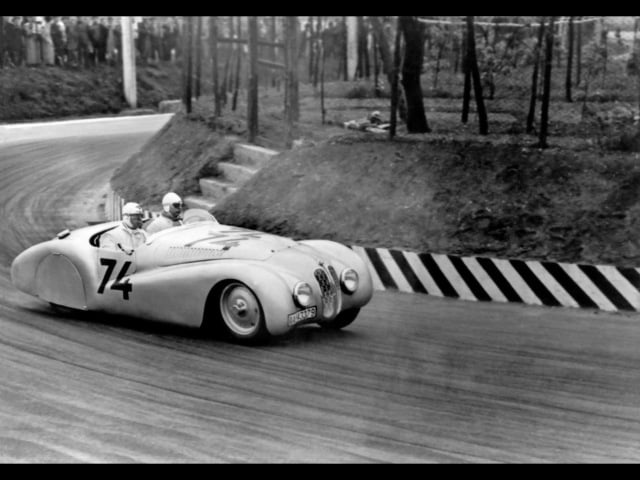 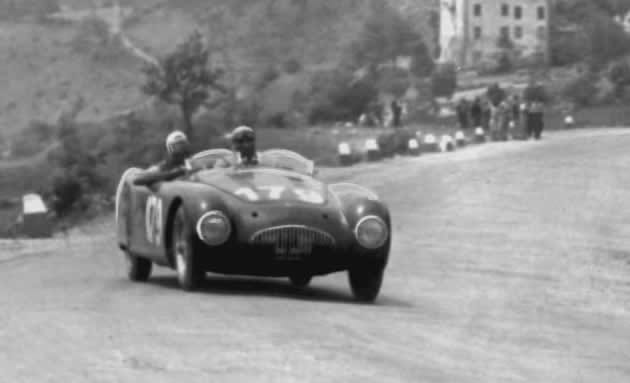 Legendary Italian racing champion Tazio Nuvolari and navigator Francesco Carena on Cisitalia 202 SMM spyder in 1947.
Tazio Nuvolari won the second place, although he was almost at the end of his wonderful career, spanning three decades (1920 to 1950). 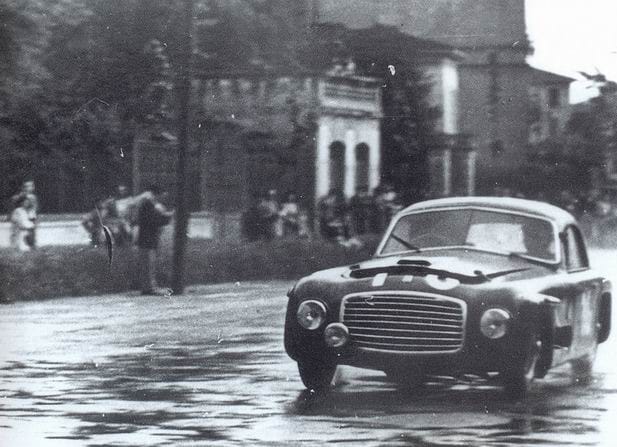 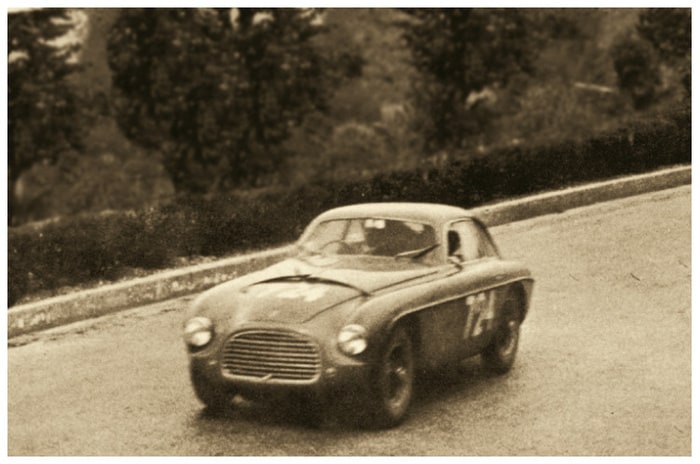 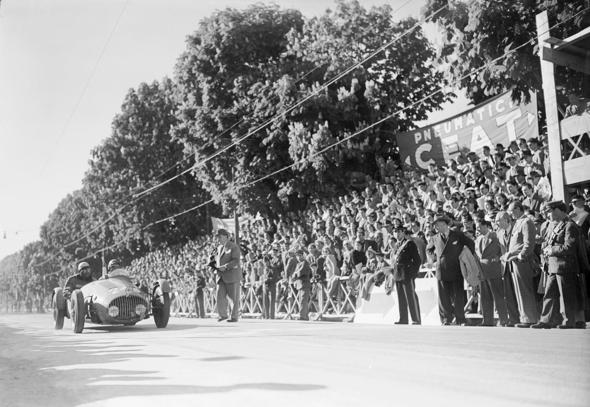 Picture from the Mille Miglia 1951. 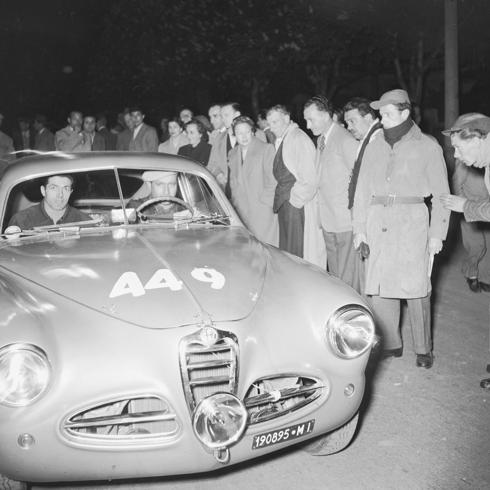 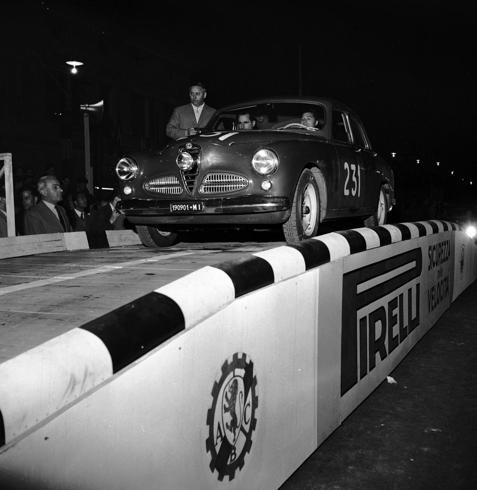 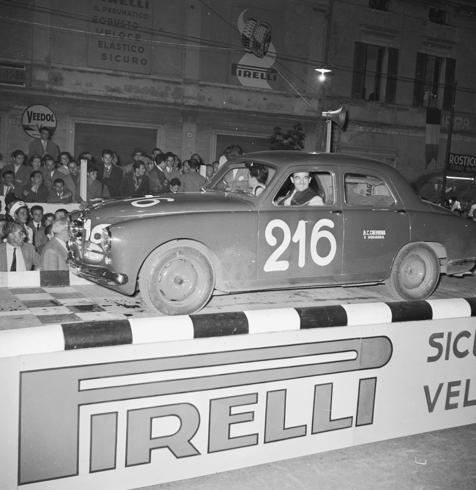 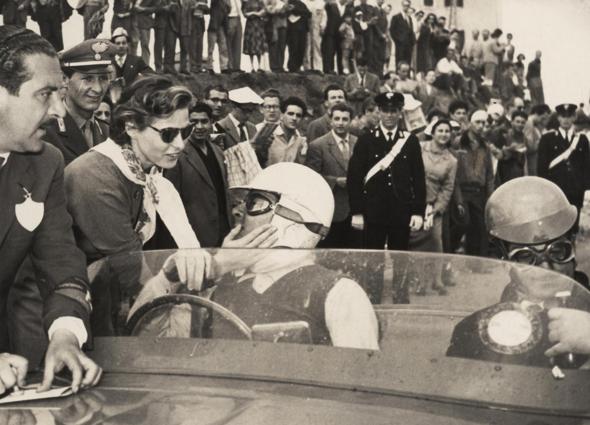 Ingrid Bergman with Roberto Rossellini just before his start in the Mille Miglia 1953.
The navigator of Roberto Rossellini was cameraman Aldo Tonti, who worked with him in Il Miracolo (episode of L'Amore, 1948) and in Europa '51 (1952). 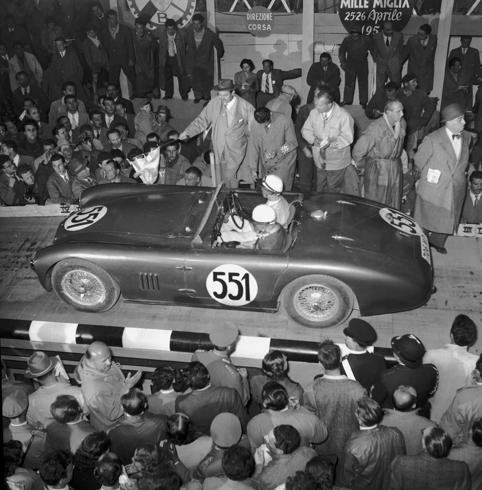 Picture from the Mille Miglia 1953. 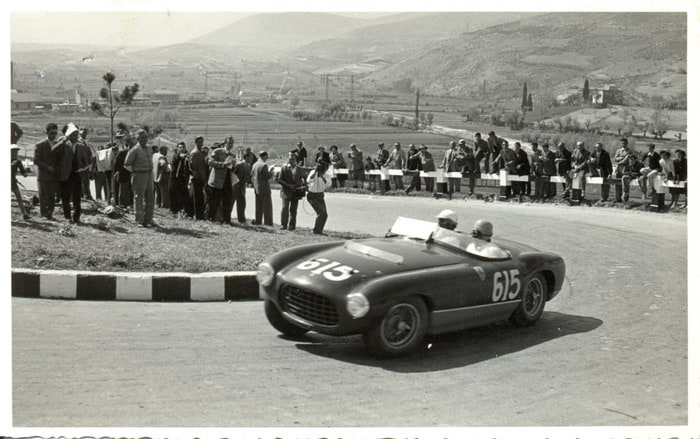 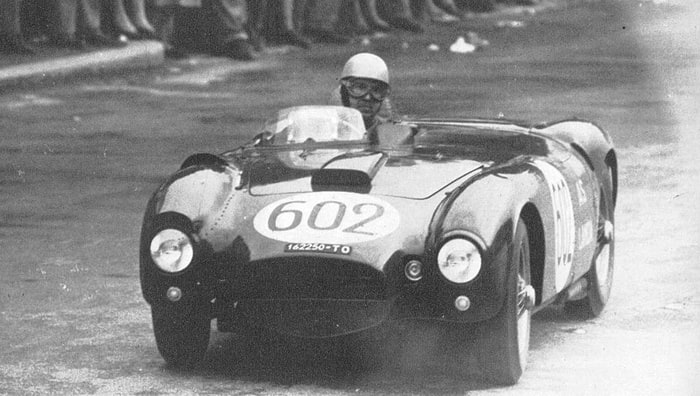 Italian racing champion Alberto Ascari on Lancia D24 Carrera spyder Pininfarina, winner in 1954.
Load more items (22 more in this list)
The Mille Miglia (1000 miles) was an open
road endurance race who took place in Italy twenty-four times, in its classic form, from 1927 to 1957. There were 13 editions before the World War II and 11 editions from 1947.
The race started from Brescia (Lombardy) to Rome, then went back to Brescia, following different tracks through the years and with
an exception only in 1940.
Several kinds of cars took part in the Mille Miglia, with the slower cars starting first.
The competition number of each car was accorded to its starting time; e.g. if a car
had its start scheduled at 6:02 a.m. its competition number would have been 602.
From 1953 to 1957 the Mille Miglia was a
round of the World Sportscar Championship.
In 1957, two major accidents occurred. In
the first, Spanish racer Alfonso De Portago, U.S. navigator Edmund Nelson and ten spectators (six of them were children) died in Guidizzolo (near Mantova). It's believed that the accident was caused by a blown tyre of the Ferrari 335 S driven by De Portago. In
the second, German racer Joseph Gottgens died while he was driving his Triumph TR3 in Brescia.
After the 1957 edition, the Mille Miglia, in its classic form, was suppressed. 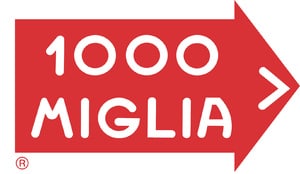 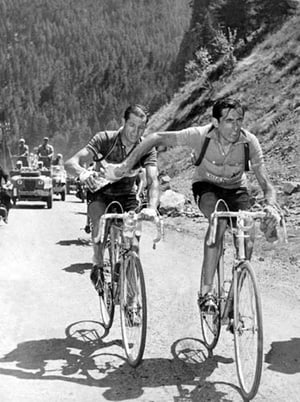 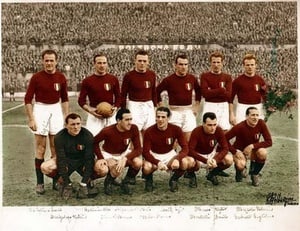