"Woodstock is fuckin' nothing if you have been at the Midnight Sun Film Festival." 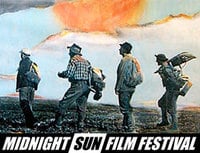 This is the list of guests who have attended the festival since it's first edition. The first four guests mentioned are usually the actual main guests of each year but I've also included some other international guests.

The program consists mostly from the films of the main guests, 20–30 modern movies, contemporary Finnish films and cinema classics, some of which are usually presented as "master classes" by various film theory experts. Typically the festival introduces 4–5 directors from younger generation who are also guests at the festival.

This festival is meant for people who truly love the art of cinema, there are no formalities or fancy cocktail parties, one doesn't have to be afraid of getting lost in the jungle of bureaucracy.

Films are screened in four venues for 24 hours a day, and the actual time is easily forgotten: the sun shines as brightly at 4 a.m. as at 4 p.m.