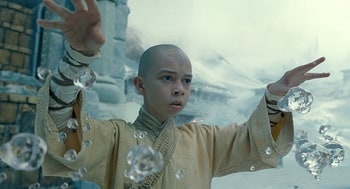 The best thing I can say about this is that I have absolutely no connection or knowledge about the source material. Becauseif I had, I would be absolutely enraged. This film is a travesty. An insult.

Awful acting. Awful dialogue. Terrible plot. Suffers from trying to be a franchise starter, but completely forgets that in order to be that, it need everything else that you requires to make a film.

This latest M. Night Shyamalan film is unfortunately not a return back to form for Shyamalan, and instead yet another disappointment from the man who helmed The Sixth Sense. His very sentimental sci-fi exploration into the human instinct of survival and fear is in many ways a complete disaster. Because in Shyamalan's attempt to create something meaningful, he completely forgets the real ingredients behind making, at least, a passable film. He doesn't entertain.

Instead we're left with a film that's criminally dull. The pacing is plodded. The action is lackluster and the acting is wooden, with the dialogue very often being cringe-worthy. The special effects are decent, but considering that it's from 2013, that's not enough. 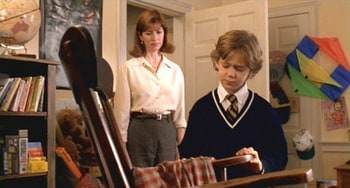 Not that many people know about this film, which is what Shyamalan did the year before he broke through. I bet he barely remember this film himself.

Anyways. It's sometimes warm and sweet, with some decent dozes of humour. But it's also incredibly stupid and unbelievable. 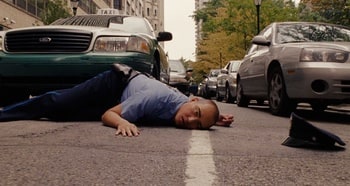 For me, I guess you could say that The Happening was the film that started to show Shyamalan's fall from grace. The Happening is a bad film. It's a really bad film. But it's an interesting film nonetheless.

The premise is kinda cool, and it's quite honestly a film that's so bad it's good. The completely, unbelievably awful acting combined with the ridiculous dialogue is pure comedy gold. Therefore, The Happening is actually quite entertaining.

To say that I'm a fan of M. Night Shyamalan would be a bit of a stretch, but he is a filmmaker that truly fascinates me and he is a director that I truly respect. He's the kind of director that stands out from the type of machine-fueled, generic, Hollywood filmmakers that just spews out formulaic films without any thought given to them. Shyamalan makes unique films. He brings a very distinct vision to his films and they're always slightly fascinating in one way or another. This doesn't mean that always succeeds in creating good films. Many of his film are truly bad, but at least I feel like he's taking risks with his films. That he's at least trying to do something different with them. This is the case with GLASS as well. His conclusion to his minor superhero-trilogy that started with UNBREAKABLE and surprisingly continued with SPLIT, which are two films that I like. There's been a bit of a hype building up towards GLASS, but I'm kinda sad to say that it didn't fully live up to it.

I'm intrigued by what Shyamalan is going for and for major chunks of the film I'm fascinated by how the film is trying to link superheroes with mental illness. Unfortunately, the execution of Shyamalan's idea is not as good as the idea itself. The film got major issues that severely hampers the enjoyment of it, and some of them kept directly pulling me out of the film. It's very clear that while UNBREAKABLE and SPLIT belongs in the same universe, both of those films had the opportunity of kinda being their own little film. Shyamalan is really struggling with connecting the characters from those films together. This directly leads to a lot of clumsily told exposition that have to make you remember what happened in previous films, explain things that doesn't really need explaining and how everything links to together. It's at times extremely jarring.

Another thing is that the problem with connecting the characters also leads to the film not really knowing what to with them, meaning that Bruce Willis is side-lined throughout most of the film for instance and that he doesn't have much of an arc. The same thing could also be said about Samuel L. Jackson as Mr. Glass himself for the first half of the film. Shyamalan is really struggling with juggling the different dynamic between each main character, and it leads to none of them being as fully realized as you would want them to be. It doesn't help either that Shyamalan is also trying to mix in Anya Taylor-Joy as well. Her presence feels unnaturally forced.

When it comes to M. Night Shyamalan films, I don't think there's any spoiler in mentioning that there's some sort of twist ending. There kinda is and I'm not really sure what to think of it. It both feels kinda under-explained and over-explained at the same time, that it kinda ruins a lot of the mystique that surrounded UNBREAKABLE and SPLIT. It doesn't really give you that catharsis you kinda expected to get going in.

GLASS is a visually neat looking film with a clever idea, but as a continuation and conclusion to what Shyamalan has spent several years trying to set up, it ultimately falls short. 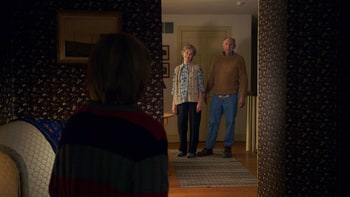 After Shyamalan's two latest failures, it's nice to see him take a step back in terms of production scale and instead focus on a much simpler story. It's also interesting to see him play around with the found footage genre, which is in some ways the most tiresome genre out there now.

The Visit is a really dumb film with a lot of silly moments in it, it's almost on the edge of being a spoof film at times. Still it manages to be rather creepy thanks to some solid performances, a well-thought out use of the found footage style, and some really bizarre things happening. It features a lot of Shyamalan's trademarks, for better and worse, and after some bombs, it's nice to see Shyamalan getting slightly back on the horse again. 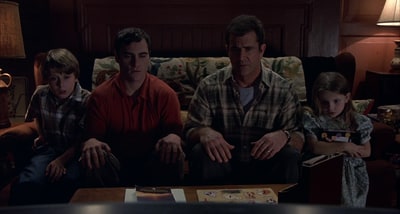 Signs is Shyamalan at his absolute best and worst. It represent much of the accurate and well thought-out filmmaking that have made Shyamalan a name worthy of remembering. The scenes in Signs are well-crafted. The mystery and tension is always high, and the film does a good job stringing up the emotions for a powerful ending.

It is however a film that is bothered by logical issues. Suspension of disbelief can only go so far in a film and in Signs case, it's not enough. The film's logic doesn't work in its own universe. Another thing is the weird attempts at humor that runs through the film. It rarely works. Signs is a fine film, though I do think that the script would have needed another rewrite. 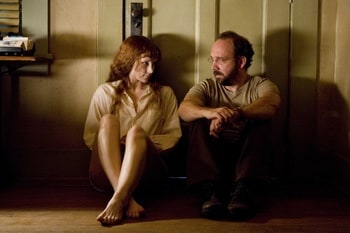 The thriller/horror elements in it doesn't necessarily work that well, and some of the acting is subpar. But I've still managed to see this film four times, and enjoyed it a lot every time. And I probably will again. 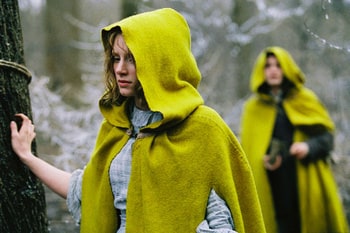 More than anything else, I think The Village suffered from wrong and poor marketing. People thought they were get going to get a horror/thriller from the guy who helmed The Sixth Sense. But that's not what The Village is. It's actually a quite sweet love story.

There are minor thriller elements here, which establishes some kind of menacing mood. It's done suitably well, but the film's main gear lies in the small love story it tells. A story that I got engaged in and made me really like The Village. Also. If you say that you predicted the final twist, you're lying. 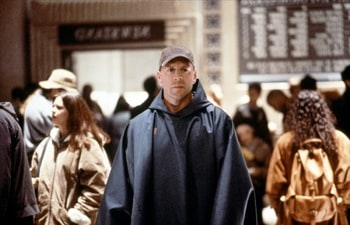 Unbreakable is a really cool and rather different type of super hero film, and it's one that I definitely would like to see a continuation of. Bruce Willis and Samuel L. Jackson is a brilliant combination, and despite Unbreakable's slow pace, it manages to be quite suspenseful.

It also manages to stay completely unpredictable, unlike most super hero films, and it's almost embarrassing how overlooked and forgotten this film is.

It's great. It's Shyamalan's best film since The Sixth Sense and is a very much welcome return to form after some of his weaker films. With a stellar performance from James McAvoy, Shyamalan has created a film that is as fascinating as it is tense. It's a film that kept on surprising me and one that continuously kept me on the edge of my seat. It's a well-put together film that blends the very best of Shyamalan into a film, that's certainly not for everyone, but one that really entertained me. The ending is also wonderful, and is a complete redefining of the typical twist ending. 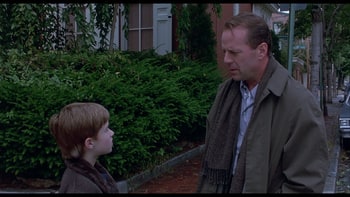 Arguably the greatest twist ending of all time. I feel sorry for the people today who've yet to see this film, but have gotten it ruined because of its cultural significance. Anyways, a great twist is rather pointless if it doesn't hold up the second time you see the film, and oh my, it really holds up after countless of re-watches. The film is filled with clues.

Aside from that, the story itself is just great. The acting is superb, and it's at times extraordinarily frightening.

Coldest Large American Cities You Should Avoid... by Milena

TV Characters I Hate by becks

No Happy Ending by Joanna

Top 10 Movies I Like But Everyone Else Hates by darthjoker12

Playstation Games I Own Digitally by Bml93