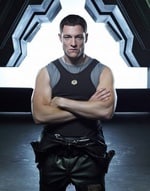 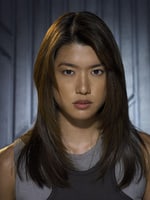 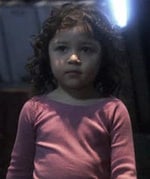 Why is this nipper so special?
The Cylons could not procreate with each other. It was an inherent flaw by their creators so that they would seek out humanity to unite both races. This idea got hazy and various experiments and tests were set up to work out what was wrong with the Cylon breeding.

One such experiment involved the stranded Karl Agathon (Human) on the planet Caprica, where he was put in situations with Sharon (Cylon) to prove his loyalty and, most of all, love for her. The feeling grew to be mutual and it is speculated that love is the missing ingredient in the procreation process (between a human and a cylon).

Hera's existence was constantly debated from both sides of the war and she was constantly in the firing line with what to do next. She was prophesised from various sources that she would be special and it was in her that all our hopes should be invested.

The Cylons eventually split in ideologies which lead one half to believe that Hera's DNA was their salvation. The Loyalist faction as they were known divised an ingenius scheme to kidnap her to harvest her to find out why she exists. The Rebel Cylons and Humans teamed up for one last mission to get Hera back.

It was later found out that Hera would be the common ancestor from which all of modern humanity on Earth was descended. She is our Mitochondrial Eve.
Seaworth's rating: 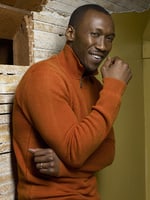 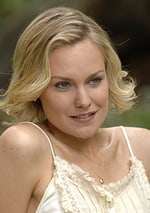 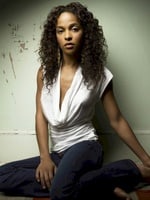 Why is this nipper so special?
From as early as the 1940s, people have mysteriously disappeared off the face of the Earth without a single trace. Richard and Lily were two of these 4400 individuals that reappeared in 2004.

However, Lily came back pregnant. Through some weird connection, Richard and her knew it was their child. Isabelle would eventually show the same abilities as the other 4400 returnees but there was something different about her. Something darker...

Isabelle would later drain her mother's youth to grant her a young woman's body but sadly lead to the death of Lily.

It would later be revealed that Isabelle was a stowaway sent by the Marked, the 'evil' faction from the future. Isabelle possessed multiple abilities making her an extremely powerful young woman. Because she didn't understand her purpose in the world, her allegiance was erratic and she was extremely ruthless in everything she undertook.

Richard, although heartbroken at the loss of Lily, would try his best to save his daughter however he could.
Seaworth's rating: 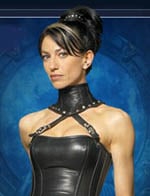 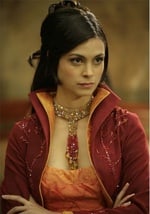 Why is this nipper so special?
When Vala sacrificed herself to destroy the Ori Supergate in our galaxy, she mysteriously woke up on a planet in the Ori home galaxy. She was found and taken care of by a kind cripple, Tomin. Vala also made the discovery that she was pregnant. So to avoid any further problems (behind enemy lines), she married Tomin and implied it was his.

Turns out that the child was implanted by the Ori to be their Orici. A human with superhuman abilities, as close to an ascended being as they could get. Adria grew into a young woman within a matter of days of being born. She was given the responsibility of leading the Ori Crusade against our galaxy.

Adria eventually ascended, after all the other Ori were killed, and she inherited all of their power and became one of the most dangerous entities in the Stargate Universe. 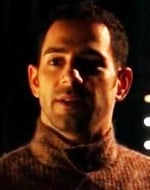 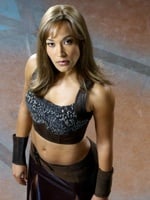 Why is this nipper so special?
Kanaan and Teyla both shared a unique genetic trait which gave them a special bond and they also grew up in the same society. A rogue scientist experimented on their ancestors to make them a more nutritional food source for the Wraith. The project was abandoned but some Athosian people who got away still have the gene that allows them to exhibit Wraith psychic abilities.

Their son would obviously exhibit this ability and his DNA was essential to complete recurring nemesis, Michael's, hybrid research. He kidnapped the entire Athosian race and experimented on them all to become hybrids but it wasn't permanent. Young Torren was the key to finishing his research.

Michael and his army would be relentless force that the inhabitants of Pegasus may not have been able to resist.
Seaworth's rating: 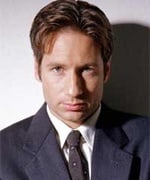 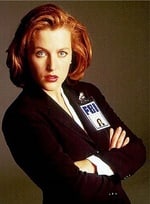 Why is this nipper so special?
The long awaited union of Mulder and Scully came about just before the end of the X-Files' 7th season. However, we didn't know about it until later seasons.

Due to an implant from her various escapades, it has always been thought that Scully couldn't conceive a child. So the coming of William was a surprise to everyone! After his birth, William would exhibit certain supernatural abilities which obviously made him a mystery worth looking into.

William was an oddity which raised many eyebrows and he was in danger from various organisations. Scully and her friends did everything they could to protect him. The greatest protection Scully could give him in the end was to give him up for adoption.
Seaworth's rating: 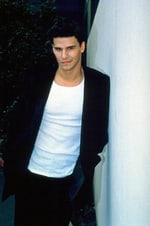 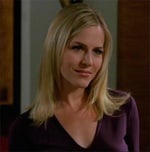 Why is this nipper so special?
Vampires are undead and therefore can't have kids. Guess again...

Angel undertook a Trial to give the resurrected Darla her life/soul back. However, since she was resurrected she already had her second chance. The life owed to Angel was manifested as a baby when the two had sex.

This baby would gain a lot of attention from various forces because of how rare he was, what he was prophesised to do and how much he was loved. He had all the strengths and abilities of a demon but was still technically human.

He was eventually taken by Holtz (Angel's old enemy) to a Hell Dimension where time progresses differently. Connor would be brought back as a teenage boy who was raised to hate Angel. This was Holtz' final vengeful act and died knowing that he turned Angel's own son against him. 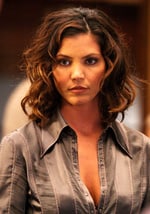 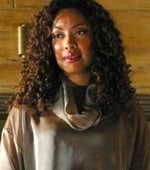 Why is this nipper so special?
Little did Angel know that the life he was owed was manipulated into giving him a son by a higher being. Connor would be the father of the being known as Jasmine.

Cordelia was also possessed by Jasmine and so they were both set down a path into having sex and giving birth to a most diabolical fiend. Jasmine would use her mind control abilities to enslave the world. Until Angel and the crew finally figured out what was going on!
Seaworth's rating: 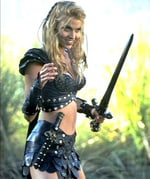 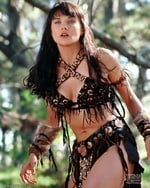 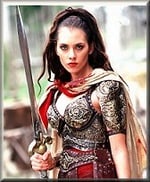 Why is this nipper so special?
I know what you are all thinking but unfortunately, it didn't happen this way. :-(

Xena miraculously became pregnant after meeting with a Light deity. She chose to forgive her former enemy Callisto for all that she had done and her reformed spirit joined with Xena. It was prophesised that this baby would bring about the Twilight which would end the time of the Olympian Gods.

Xena and her baby were the target of all the Gods who saw them as a threat. These insurmountable odds could not be challenged and so Xena had to fake their deaths. Eve was given to a friend to be educated while Xena slept for a quarter of a century.

When Xena awoke, Eve was a corrupted, violent Champion of Rome. It was up to Xena to bring her back from the brink whilst still protecting them all from the Olympian God's wrath.
Seaworth's rating: 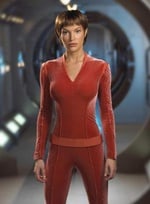 Why is this nipper so special?
Due to the recent Xindi attack on Earth, xenophobia is at an all time high. Many people on Earth do not trust alien species which usually results in violent confrontation.

A terrorist sect known as Terra Prime took matters into their own hands by taking control of a meteor-destryoying satellite and threatened to destroy Starfleet Command if all alien species didn't leave Earth.

The leader of Terra Prime, John Paxton, learnt of the relationship between Trip and T'Pol. He managed to get a copy of their DNA and through a rudimentary experiment, created a half-human half-vulcan child. At this time, breeding between the two species was impossible.

Named Elizabeth, after Trip's late sister, the baby was meant to signify a symbol of hatred of the joining of two species. But instead it ignited a sense of unity between the two stoic parents. She was the first in a long history of half-species that would help unite the Alpha Quadrant.
Seaworth's rating: 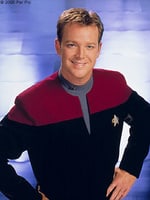 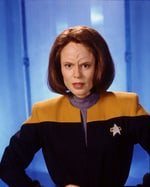 Why is this nipper so special?
The relationship between Tom and B'Elanna evolved over the entire series of Voyager and it culminated with the conception of Miral.

The pregnancy proved to be a godsend to some space-faring Klingons who were looking for a prophesised child who would save the Klingon people. They were suffering from an incurable disease until the Doctor found a cure using Miral's stem cells.

In the alternate future where Voyager made it home 16 years after Endgame, Miral would join Starfleet and raise to an ambassidors role between Earth and Qo'nos in the following 17 years. Her role was crucial in helping Janeway get in contact with the right indviduals to go back in time to change the future to get Voyager home sooner and saving her crew from untimely fates.
Seaworth's rating:

I've noticed a pattern in several TV shows I've watched over the years where a pregnancy of one of the main or recurring characters is considered to be:

A. Very Important (in terms of saving the day)
B. Significant to the Mythology of the Show
C. Showing off how hot pregnant women can be.

Here be the examples.

Warrior Women on Screen by Lexie

Men Who Look Better With Beards by Elfflame

They've Got It Covered - by ♥ CHANi

Actors/Actresses with an identical twin by Mer0o

Will James Marsden EVER Get the Girl? by Vix

This is how it ends by steven aka superant

The Evolution of Alison Lohman by SFG¿mystic

That whole mad season comes around. by Seaworth