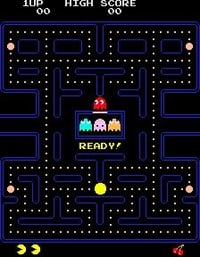 
A study would have to be done to confirm this, but I'd be willing to bet a decent sum of money that despite other game characters surpassing Namco's yellow mascot over time, that Pac-Man is still the most recognizable character in video games. Heck, back in the day, even the ghosts (Blinky, Pinky, Inky, and Clyde) were household names. But anyway, Pac-Man is one of those rare titles that if you have a young kid play it, they're likely to understand why people loved it back when it was released rather than wonder why anyone would enjoy it like many other games from the 70's and early 80's. All that said, the AI followed set paths, making this game easy to beat once you've memorized them...But that's honestly the only real flaw that I can think of. Ms. Pac-Man improves on the formula found here to near perfection...But Mr. Pac-Man is still pretty dang great.
ape's rating:


I really like this game. The concept has you battling against either the computer or a friend in an effort to catch the most fish. Fish deeper down in the water net you more points than shallow fish, but the catch is that there's a shark swimming near the surface that'll eat your fish before you can get the points. So what's your strategy? Spend the time going for the big points knowing that the shark might have made your effort a waste of time or go for the little points and hope that the small numbers eventually add up for the win? This is quite the fantastic game, and one that I feel gets overlooked far too often when people list off quality Atari 2600 games.
ape's rating: 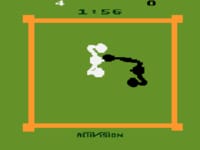 
Boxing, much like Pong, is a prime example of how games can be so simplistic, and yet provide so much fun. There's nothing to boxing. Move the joystick to move your boxer. Hit the button to punch. You're done. The goal is to land as many punches as you can within the time limit and hope that your punches landed beats your opponents. This is mildly fun playing alone, but an absolute blast when playing with a friend....Especially when the friendly trash talk gets going.
ape's rating: 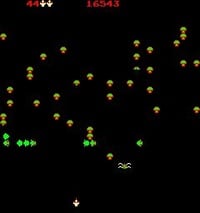 
Centipede is like a faster-paced Space Invaders...Except rather than have another shooter be in space, Atari went the opposite direction and made a game about pest control in your backyard garden. While the premise doesn't sound as intense as an intergalactic space war, the gameplay is just as intense as any other shooter that you could find in arcades at the time. It also included some strategy as you tried to control the mushrooms that pop up to herd the centipede for easy shooting. It's also worth noting that rather than using a joystick, Centipede used a trackball to move left and right, allowing for more precise movement than you'd find other shooters of its time. I never knew that exterminating insects in a garden could be so fun.
ape's rating: 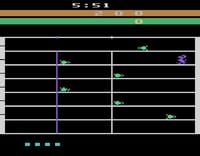 
Challenge is very mildly like Frogger in that it's your goal to make your way through a level without being hit by anything. You have to weave your way past four walls (only two are visible on the screenshot - the walls flicker so only two are visible on a still frame at a time) while trying to avoid the enemies that go from side to side on the screen, each one a different speed. When compared to games of its time, Challenge stands out as a solid game that provides some, you guessed it, "challenge."
ape's rating: 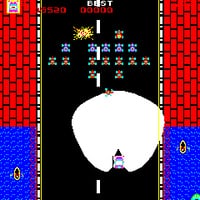 
Highway Chase is mildly like Galaxian, except replace spaceships with cars and the space background with a road. In Highway Chase, you control a police car and your job is to shoot down the cars in front of you. The catch is that they sometimes fire back and, ironically enough, your headlights make their bullets invisible. Headlights should help you see, not blind you, right? But that logic aside, it does make it very important that you pay attention to your surroundings prior to moving into position to fire, otherwise you may unknowingly move into the line of fire and not know it until its too late. Highway Chase is not a terrible game, but aside from the headlights and change in environment, it mostly just feels like Galaxian...Which is good, but not too original.
ape's rating:


I have no idea who Pele is. I just know that he's a soccer fella and that he's got a fancy kick named after him. I do know that his little Atari soccer game isn't bad, but it's also not anything to write home about. While the game is passable, it's also pretty clunky-feeling at times. I have a feeling that if this Pele guy was this clunky when he played, he wouldn't have a game named after him. I suppose it goes without saying that it probably didn't live up to his name.
ape's rating:


I've never been skiing, but I imagine that if I did go, I'd fly down the frost-covered mountain and glide right into a big, ol' pine tree. In the Atari 2600 version of Skiing, big accidents like the one above don't happen...Nor does a sense of speed. It's a pretty mild crawl down to the bottom of the hill. While the game lacks a lot excitement, the gameplay is still passable, allowing Atari 2600 owners an opportunity to ride the slopes without the risk of being clotheslined by a tree branch.
ape's rating: 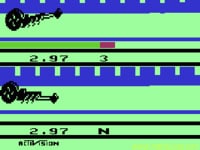 
Dragster...It's called that because playing it is a drag. Get it? See what I did there? Man, I feel so clever. Typing that pun was the only fun I had in regards to this game. This drag racing game had me purposely blowing out the engine each race just so the pain would end sooner. I've played worse...But this is still just awful.
ape's rating:

Matters of War by Vix

Favourite Films of the 60s by Toby White

Ran8 Recommends Own Lists by ran88dom99

The 100 Best TV Shows of All-TIME by Vix