The 2005 UEFA Champions League Final between Liverpool FC of England v AC Milan of Italy at the Atatürk Stadium in Istanbul, Turkey on 25 May 2005.

No score by either team during 30 minutes of extra time. 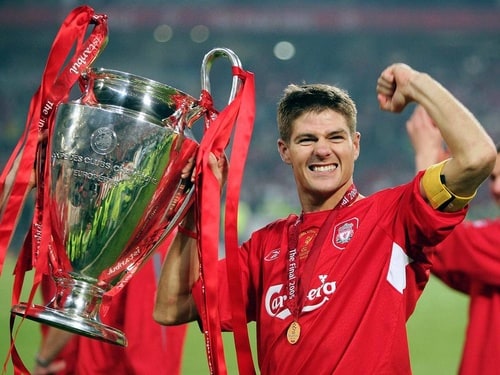 Liverpool were massive underdogs and found themselves 3–0 down at half-time. In the second half, Liverpool launched a comeback and scored three goals in a dramatic six-minute spell to level the scores at 3–3. The scores remained the same during extra time and a penalty shoot-out was required. Liverpool goalkeeper Jerzy Dudek made two dramatic saves, the last against Andriy Shevchenko, to win the trophy for his team.


The 1977 European Cup Final between Liverpool FC of England and Borussia Mönchengladbach of Germany took place at the Stadio Olimpico in Rome, Italy on May 25 1977. 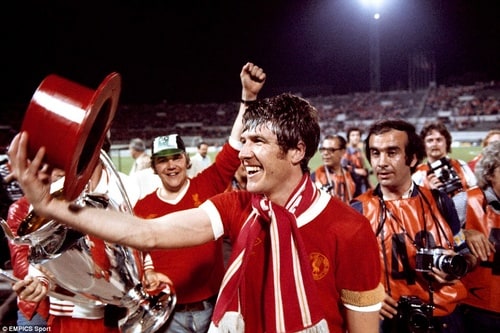 Liverpool won the match to win their first European Cup.


The 2001 UEFA Cup Final between Liverpool FC of England and Deportivo Alavés of Spain at the Westfalenstadion in Dortmund, Germany on 16 May 2001. 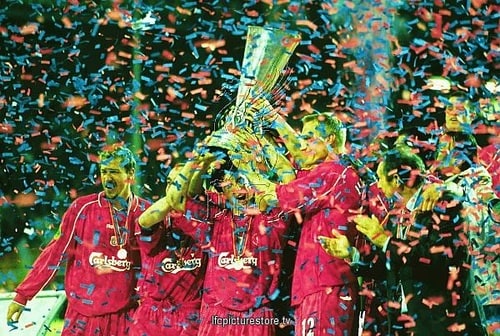 30 Minutes of extra time to be played.

With the teams level at 4-4 after 90 minutes, the game went into extra-time. The 'golden goal' was used during extra-time, which meant that whichever team scored first would win and the match would immediately be over. In the 115th minute of the match, Liverpool were awarded a free-kick. It was taken by Gary McAllister and headed into his own goal by Alavés defender Delfí Geli. As a result of the golden goal, Liverpool had won the match 5–4 to win their third UEFA Cup and complete a Treble of trophies, having already won the League Cup and FA Cup.


The 2006 FA Cup Final between Liverpool FC and West Ham United at the Millennium Stadium in Cardiff, Wales on 13 May 2006.

No score by either team during 30 minutes of extra time. 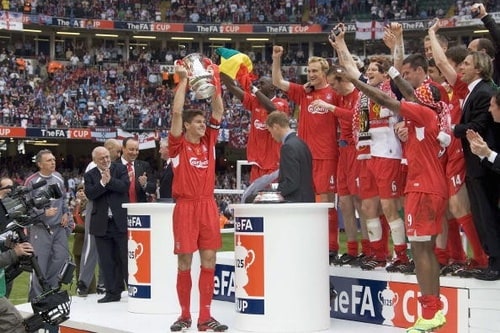 With West Ham 3-2 ahead and the game almost over, Liverpool captain Steven Gerrard scored a goal in the last minute from over 30 yards to take the game to extra-time and they eventually triumphed on penalties. The match has been called The Gerrard Final and is widely regarded as one of the greatest cup finals in the history of the tournament.

It was Liverpool's seventh FA Cup triumph to date, placing them joint fourth on the list of the most successful sides in the competition.
kathy's rating:


The 2001 FA Cup Final between Arsenal FC and Liverpool FC at the Millennium Stadium in Cardiff, Wales Saturday 12 May 2001. 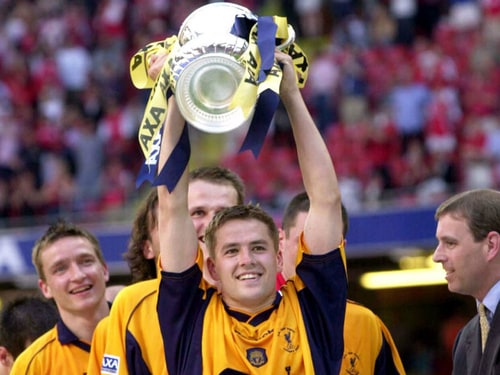 Liverpool came from behind to win 2–1, thus winning the FA Cup for the sixth time. It was the second trophy of their treble-winning season of 2000–01: they had won the League Cup in late February and would win the UEFA Cup four days later.


The 1986 FA Cup Final was a Merseyside derby between Liverpool FC and Everton FC at Wembley Stadium in London, England on 10 May 1986. The match was played seven days after Liverpool had secured the league title, with Everton finishing as runners-up. 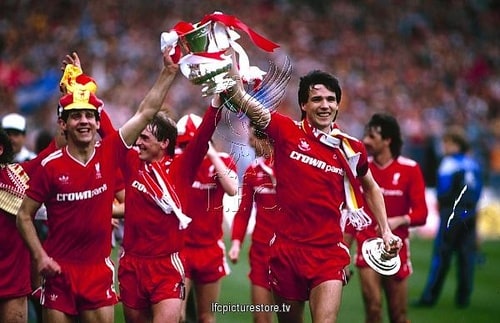 After Gary Lineker had put Everton ahead in the first half, Liverpool went on to win this match 3–1, with two goals from Ian Rush and one from Craig Johnston.

Liverpool had already won the First Division title, and so completed the Double..


The 1989 FA Cup Final was a Merseyside derby between Liverpool and Everton, played at Wembley Stadium, London on 20 May 1989. 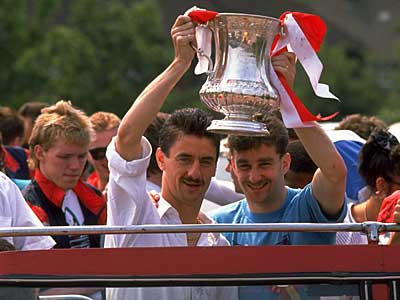 The final was played only five weeks after the Hillsborough disaster, in which 96 Liverpool fans were killed in a crush, and before kick-off there was a minute's silence and the teams wore black armbands as a sign of respect. Gerry Marsden, lead singer of Gerry & the Pacemakers, led the crowd in a rendition of his hit 'You'll Never Walk Alone', which had become synonymous with Liverpool Football Club.
kathy's rating:


The 1974 FA Cup Final between Liverpool and Newcastle United played at Wembley Stadium, London on 4 May 1974. 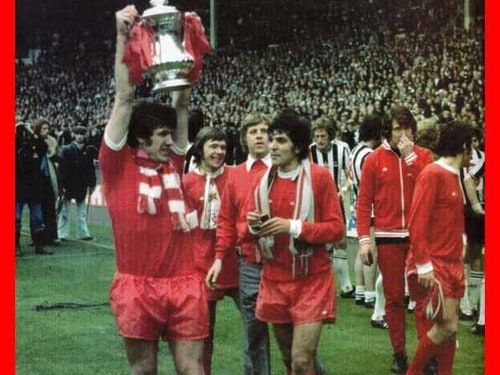 In a one-sided match Liverpool won 3–0, with goals from Kevin Keegan (2) and Steve Heighway. BBC commentator David Coleman famously said that Newcastle's defence had been "undressed" by Liverpool. Liverpool left back Alec Lindsay had a goal disallowed, although replays later showed the offside pass that supplied Lindsay's 'goal' came from a Newcastle defender, thus meaning the goal should have stood.

It was manager Bill Shankly's last game in charge of Liverpool, as he retired during the 1974 close season and was succeeded by coach Bob Paisley – though Shankly led them out for the Charity Shield match at the start of the next season.
kathy's rating:


The 1992 FA Cup Final between Liverpool and Sunderland at at Wembley Stadium on 9 May 1992. 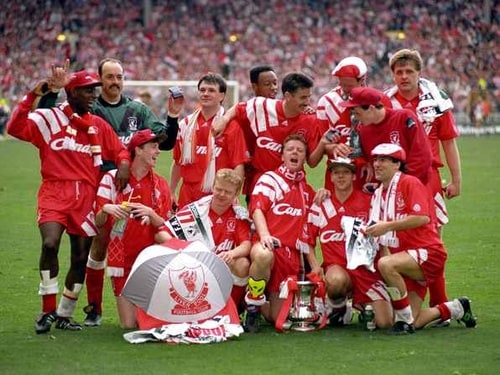 It was Liverpool's fifth triumph in the competition, and would be their only major trophy under the management of Graeme Souness, who was appointed a year earlier; while Souness picked the starting line-up, his assistant Ronnie Moran took charge during the match, as Souness was still recovering from heart surgery.

During the presentation, the winning team was mistakenly given the loser's medals and Sunderland found themselves with winning medals. This was later rectified by the players themselves, on the pitch.
kathy's rating:


The 1965 FA Cup Final between Liverpool and Leeds United at at Wembley Stadium on 1 May 1965. 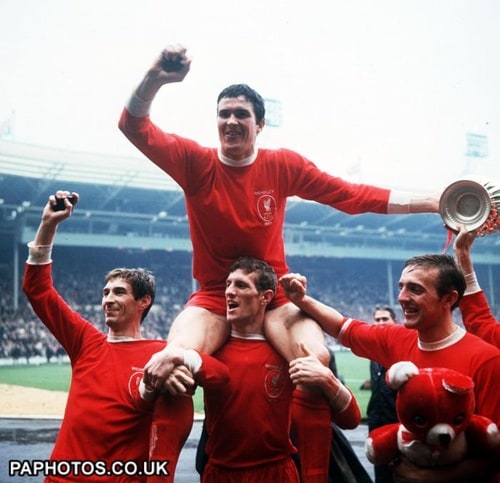 The game ran to extra time — the first Final to do so since 1947, and the additional period was played out in an atmosphere of great tension and drama before Liverpool were victorious and won their first-ever FA Cup.

This was the first FA Cup Final to feature a black player: Albert Johanneson.
kathy's rating:

The Miracle of Istanbul: Reflections and Tributes
26 item list by shotswerefired
10 votes

The Miracle of Anfield: Reflections and Tributes
15 item list by shotswerefired
6 votes

I really miss this Band & Lineups by Georgini

Edna May Oliver - Movies by Kandi

Favorite Images of Tapirs #1 by kathy