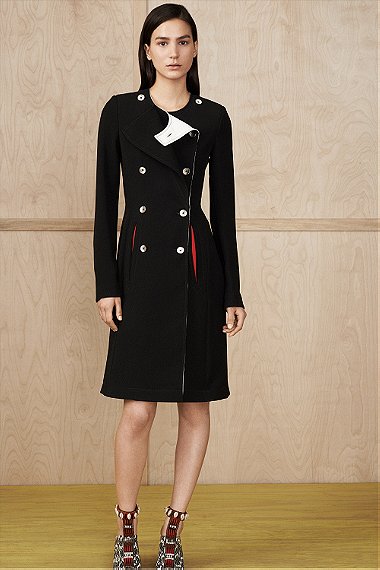 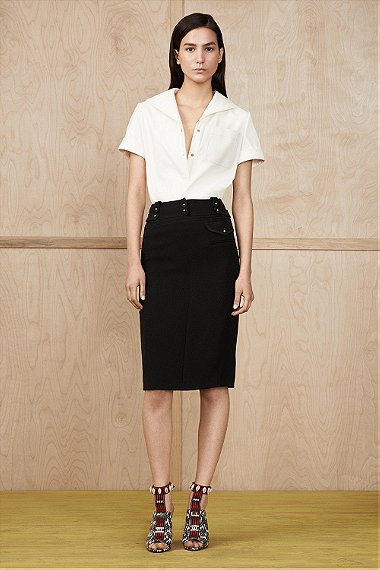 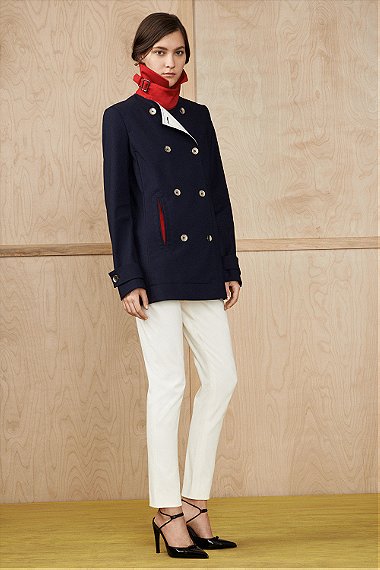 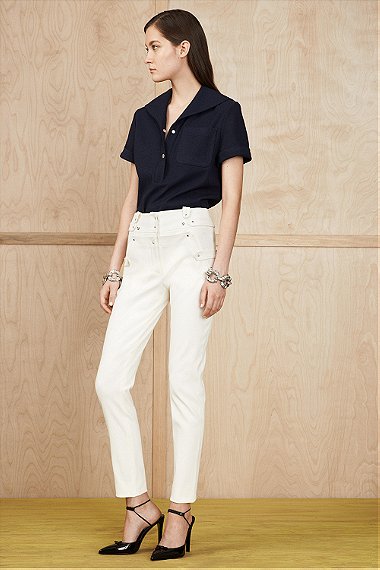 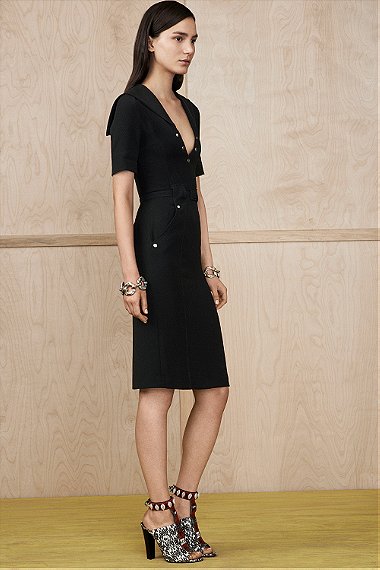 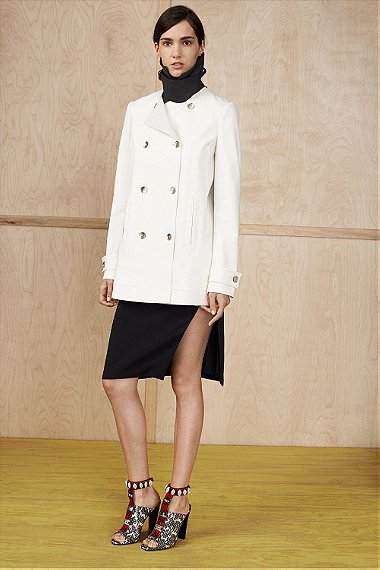 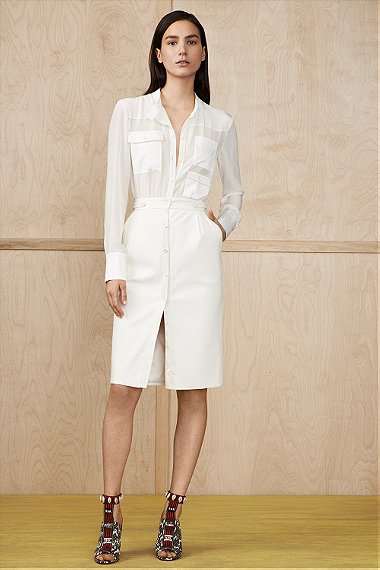 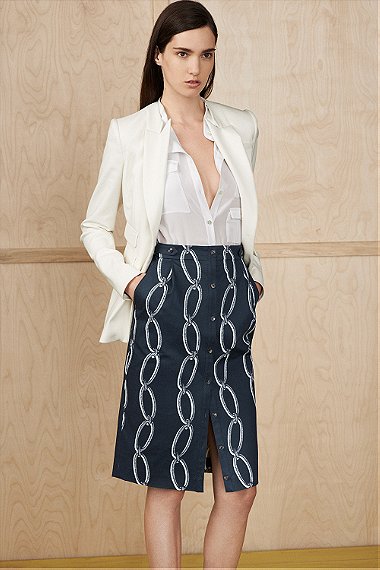 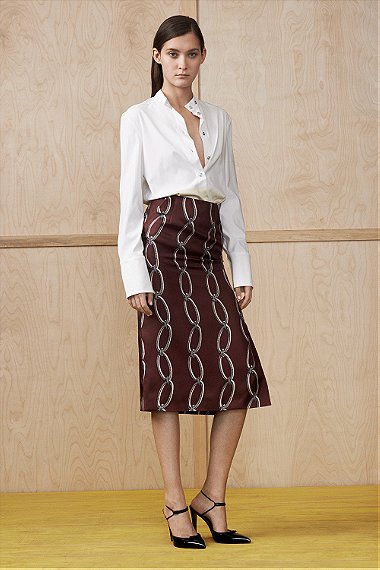 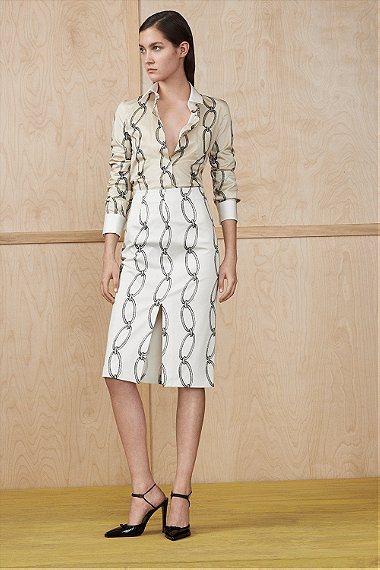 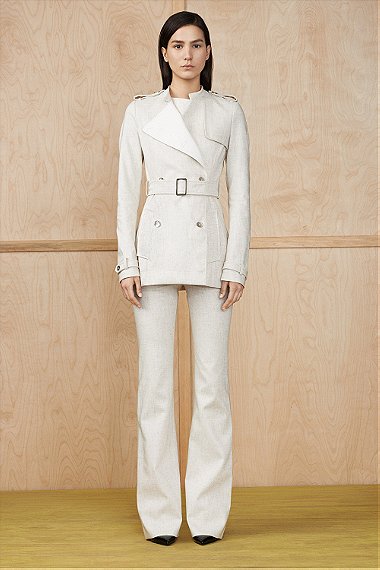 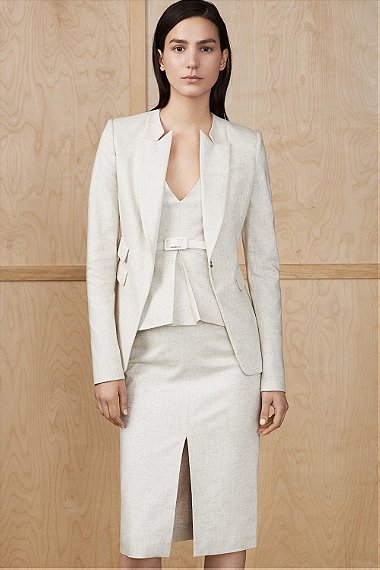 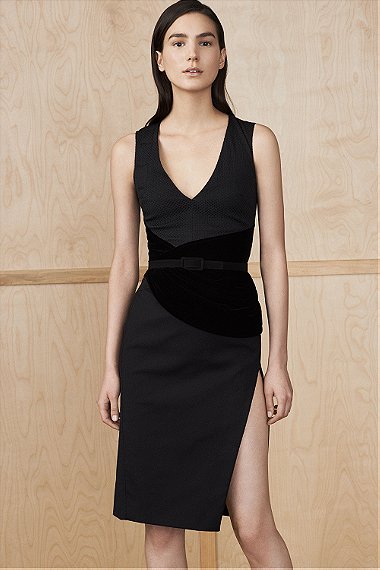 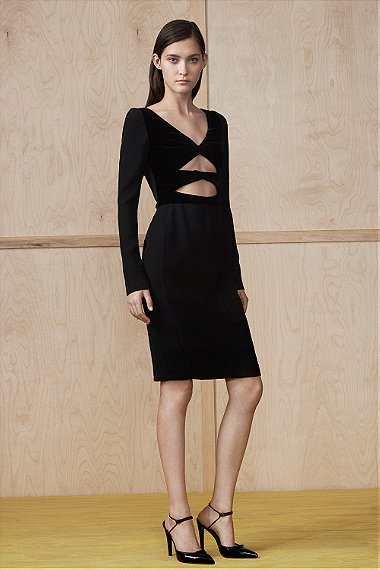 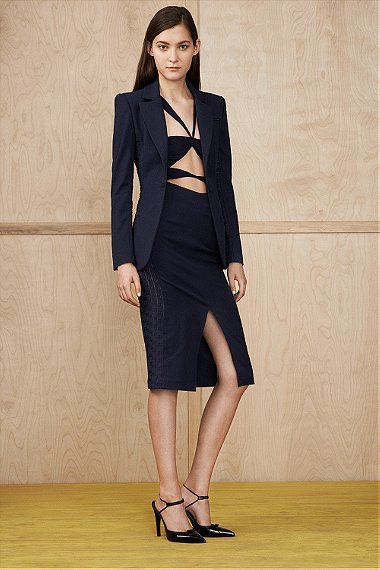 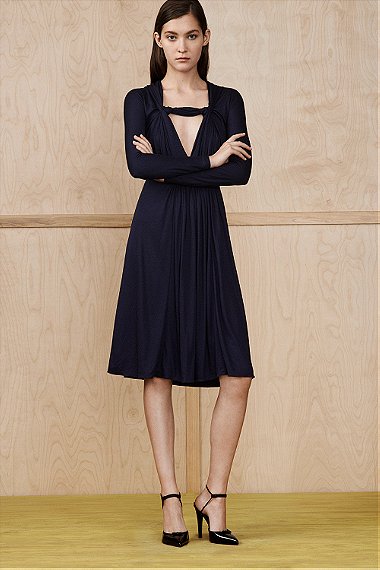 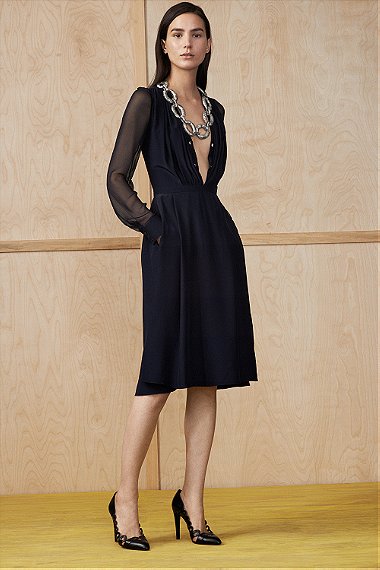 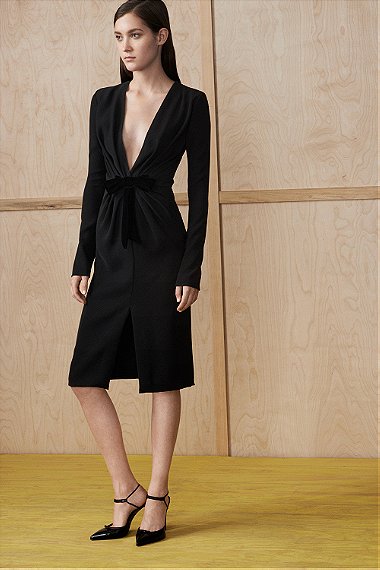 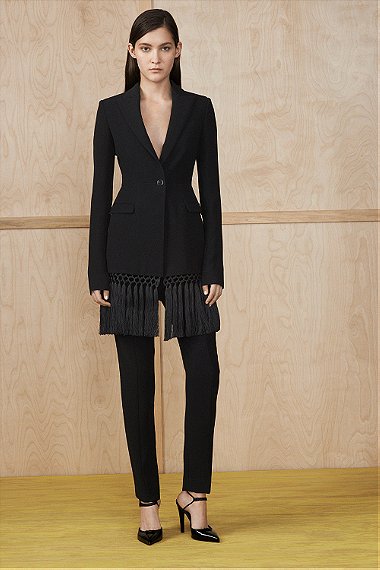 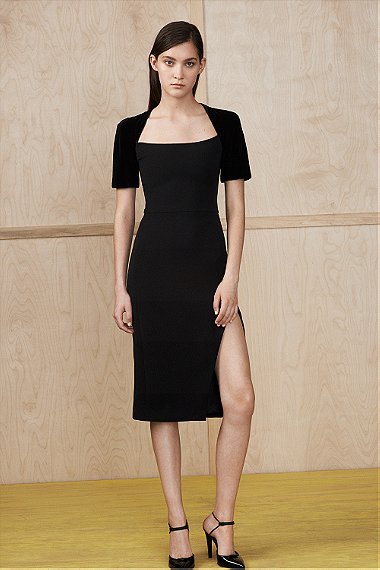 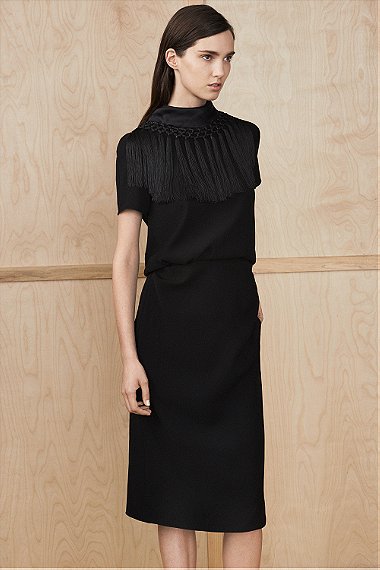 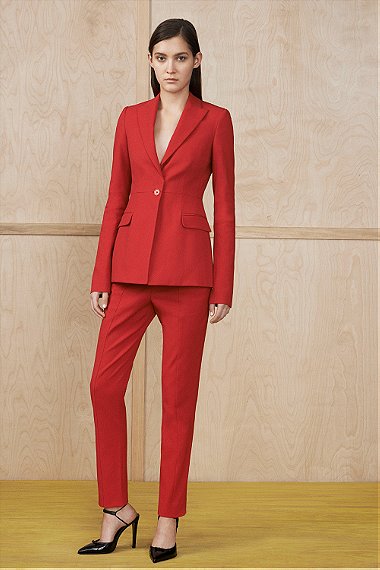 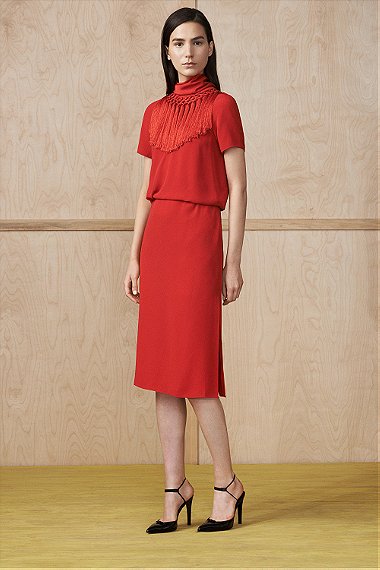 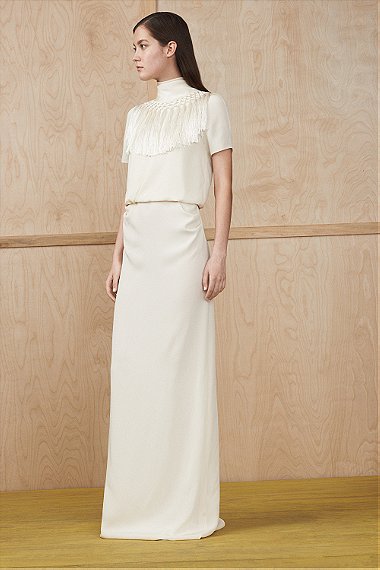 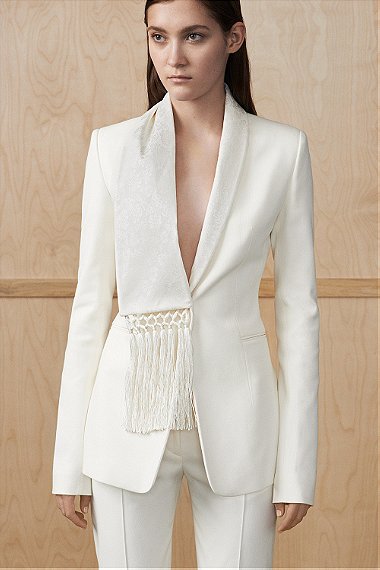 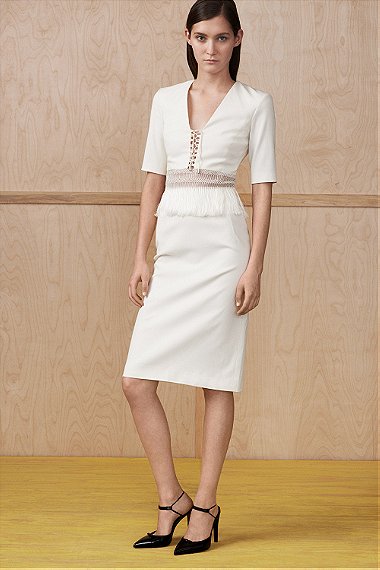 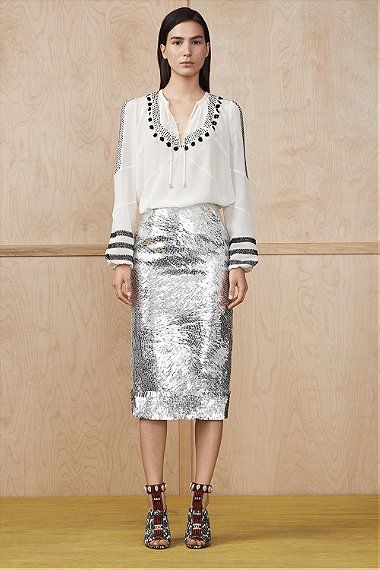 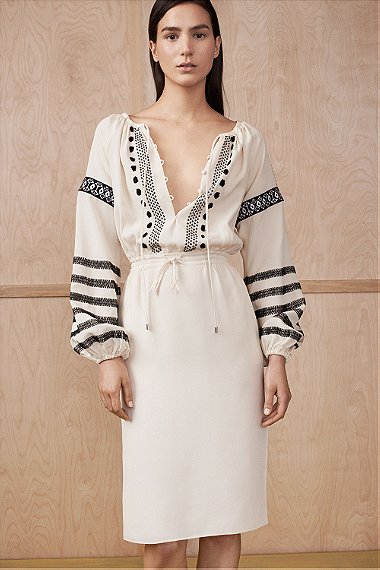 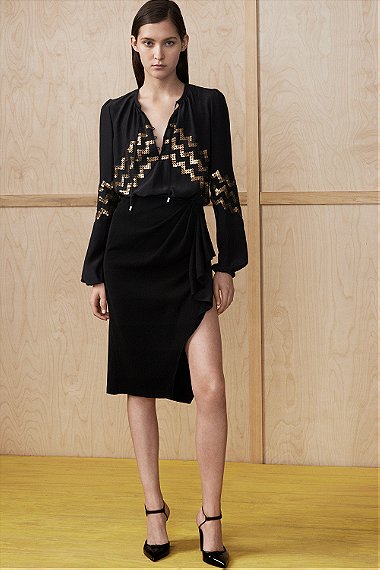 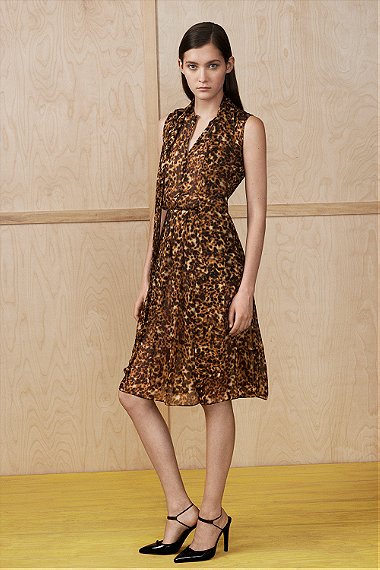 Review by Nicole Phelps
It was kisses all around at Joseph Altuzarra's Resort presentation. He picked up the CFDA Womenswear Designer of the Year Award last night, two years after his Swarovski Award for Emerging Talent. Altuzarra has moved very quickly into fashion's big leagues. "I felt so happy to be nominated, but I'm very happy to have won," he said onstage.

Beyond awards, there's also the game-changing Kering investment, an influx that helped him develop a new shoe collection, which had its debut today. He dubbed his Resort offering Querelle, after the Rainer Werner Fassbinder film. It meant there was a maritime theme, a burgeoning trend this season and a look that Altuzarra has successfully navigated before. He opened with a three-quarter-length peacoat with contrast piping and linings and a detachable collar. Sensible, considering this collection will arrive in stores just as winter starts in the Northern Hemisphere, and also irresistibly chic. From there, he riffed on sailor pants and tops, but not too literally, and revisited the peasant blouses he's made something of a pre-season signature, this time giving them a North African twist.

For a young designer—at 30, he still qualifies—Altuzarra is a smart, methodical businessman. He's observed what works for his brand and has delivered new takes on those pieces here. Tailoring is a strong category, so naturally there was a beautifully cut white pantsuit. The news was in its asymmetric shawl collar; one lapel was draped like a scarf with a deep hem of silk fringe. And, as he put it himself, "it wouldn't be Altuzarra without slits," so he revisited the "very French, very bourgeois" little black dresses of Fall ’12. Slightly streamlined, they were still sexy as all get out. The surprise was in the long dresses, territory he's more or less avoided until now. A two-piece black look consisting of a floor-length skirt and a bow-front top longer in back than in front had us hoping that he keeps thinking along similar lines for Spring.

Places I want to go by Judith

The Evolution of Justin Bartha by PowerGirl

My favorite TV-Shows by IsabellaSilentRose

Books I want to read by IsabellaSilentRose

Favorite Pictures from the NOH8 Campaign by IsabellaSilentRose

The Evolution of Rani Mukherjee by IsabellaSilentRose