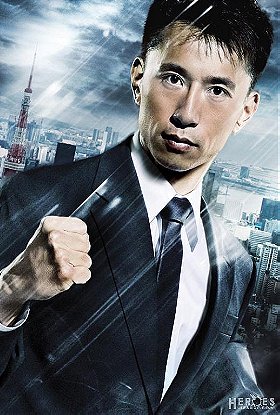 26 votes
If I were a Hero (27 items)
list by edwardsheroin
Published 13 years, 2 months ago

Born in Seoul, South Korea, Lee moved with his family to New York City at the age of 10. He graduated from Bronx High School of Science and continued his education at Boston University and New England Institute of the Arts where he studied communications and broadcasting.

After trying out improv and inspired by his newly discovered passion for performing, Lee sold his used car for $1800 in the summer of 2001 and purchased a one-way ticket to Los Angeles, where he began his training in music, dance, and acting.

At his first small screen audition, he landed a guest-starring role on J.A.G., and has since appeared on Las Vegas, The West Wing, Heist, Threat Matrix and All About the Andersons.

Lee stars in three other feature films to be released this year: Necrosis, Then There's the Afterlife and Destiny, the latter directed by Matthew Vaughn.

A student of improvisation and sketch comedy at The Groundlings, UCB and I.O. West, Lee also enjoys playing basketball and the piano, as well as reading biographies and watching documentaries. ... (more) (less)
Tags: Heroes (1), South Korean (1), Born 1975 (1)
My tags: