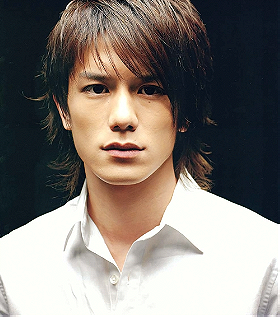 1 vote
View all Hideaki Takizawa pictures
Hideaki Takizawa (滝沢 秀明 Takizawa Hideaki, born March 29, 1982) is a Japanese actor and member of the J-pop duo Tackey & Tsubasa from Tokyo, Japan. In 2002, when he reached the age of 20, he debuted with Tsubasa Imai in the group Tackey & Tsubasa under the record label Avex Trax. That same year, he graduated from Johnny's Junior. Tackey & Tsubasa have released many popular singles such as "Ho! Summer" and "Venus". He gained fame as an actor after starring in Japanese dramas such as Majo no Jōken and Strawberry on the Shortcake.
Tags: Asian (2), Japanese (2), Actor (1), Most Beautiful Men On Earth (1), Singer & Actor (1), Tackey & Tsubasa (1), Johnny's Entertainment (1)
My tags:

matt added this to a list 4 years, 8 months ago
Most beautiful men on earth 6 (200 person items)