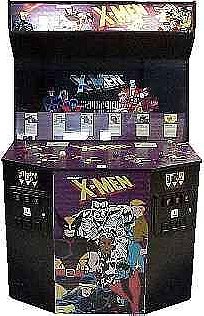 The player chooses one of six X-Men: Cyclops, Colossus, Wolverine, Storm, Nightcrawler, or Dazzler. Their objective is to stop the villain Magneto from wreaking havoc on human civilization. They must fight through an army of hundreds of Sentinels and supervillains such as Pyro, Blob, Wendigo, Master Mold, The White Queen, Juggernaut--who strangely wields a bazooka in his boss fight-- and Mystique, who was also a boss enemy in the game, although she simply took the form of Magneto and attacked players with punches and kicks. Later, Magneto kidnaps Professor X and Kitty Pryde, prompting the heroes to go on a rescue mission. ... (more) (less)
Release date: 1 June 1992
Tags: Multiplayer (1), 1992 (1), 1990s (1), Side Scroller (1)
My tags:

blondskate added this to a list 2 years, 2 months ago

Elusuariodiverso rated this 8/10 4 years ago

KBLists added this to a list 4 years, 11 months ago
My Favorite Video Games of All Time (20 games items)