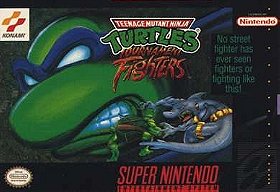 The game is very much in the tradition of the Mortal Kombat or Street Fighter series, pitting you against opponents one at a time. Some fighters (besides the turtles) will be familiar, such as the Rat King, or even Shredder (now called "Cyber-Shredder" here).

Though even people familiar with the turtles will see differences in them. They can now, for example, do moves involving projectiles, such as "fireballs".

Paulo Júnior added this to a list 1 year, 4 months ago

"Part of the TMNT franchise."

Paulo Júnior added this to a list 2 years, 4 months ago

José Lopes added this to list 2 years, 11 months ago

Guntirl added this to wanted list 3 years, 5 months ago