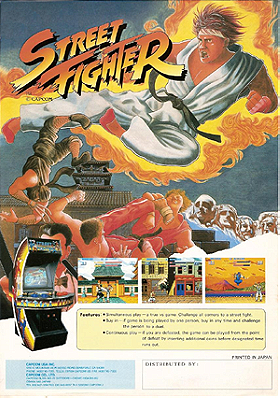 29 votes
Most Important Games of all Time (38 items)
list by CelShader
Published 13 years, 4 months ago

View all Street Fighter pictures (18 more)
Street Fighter (ストリートファイター, Sutorîto Faitâ?) is a 1987 arcade game developed by Capcom. It is the first competitive fighting game produced by the company and the inaugural game in the Street Fighter series. While it did not achieve the same popularity as its sequels (particularly Street Fighter II) when it was first released, the original Street Fighter introduced some of the conventions made standard in later games, such as attack buttons and special command based techniques.
Tags: 1987 (2), Fighter (1), Original (1), Arcade (1), Game (1), 1980s (1), Fight (1), First (1), Capcom (1), Street (1), Ken (1), Ryu (1), Fighting Game (1), Sagat (1)
My tags:

PerfectPortal rated this 6/10 1 year, 4 months ago

CPeavey added this to a list 2 years, 5 months ago
Completed Games (864 games items)

Fernando Leonel Alba added this to a list 2 years, 6 months ago

"I already talked about this videogame on my biggest dissapointments in entertainment list where I sum up my experience with it pretty well. I don't want to repeat myself nor touch this turd ever again."

Hussam Khalil added this to list 2 years, 9 months ago

patrician added this to owned list 3 years, 11 months ago

Fernando Leonel Alba added this to a list 4 years, 1 month ago

""Oh God I'm playing the original Street Fighter!" "Oh God it's one of the worst games I've ever played" This sums up my experience with this thing, I loved Street Fighter as a kid and I still enjoy playing it from time to time, so when I crossed upon its very first realease, completely clueless about its bad reputation, it was a punch to the balls for me. But I guess things turned out very well to this atrocity. "

masterlobo added this to owned list 4 years, 7 months ago

Elusuariodiverso rated this 6/10 6 years, 1 month ago

moviebuff added this to a list 6 years, 9 months ago
Most Influential Video Games Of All Time (77 games items)