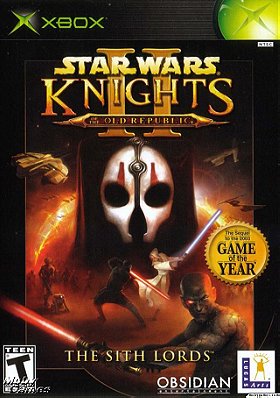 charidotes20
I played this game a long time ago, and I don't have a copy of it anymore. But it was a good game, although it never quite stepped out of the shadow of its great predecessor--often the plot seemed to be more of a meditation upon the events of the first game, rather than a real step forward. It was, however, a much darker game than the original. Sometimes too dark--it often just felt like the devel... read more

Sequel to the original KOTOR.

Sequel to the original KOTOR.

“Warning: SpoilersKOTOR 2 takes place five years after the original KOTOR. This time, you play as an exiled Jedi Knight, a veteran of the Mandalorian Wars, who followed Revan to battle against the Jedi Council's wishes. The Sith have hunted the Jedi Order on the verge of extinction, you are the only known Jedi left, and the Sith are focusing all of their attention on you. In addition to that, the Republic is on the verge of collapse, still recovering from the Jedi Civil War. Whether Revan saved or crushed the Republic affects the storyline. KOTOR 2 has eight planets, two of which are from the original KOTOR. Instead of fighting a bunch of Sith soldiers, you fight Sith assassins, and of course, there are a couple of Sith Lords leading the crusade against the Jedi Order: Darth Nihlus, and Dar” read more

Viro voted for a review of 4 years, 3 months ago