Sherlock Holmes: The Mystery of the Mummy - PC Games 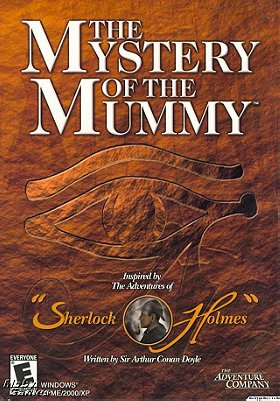 1 votes
Games that define my life (138 items)
list by 186FleetStreet
Published 8 years, 11 months ago
View all Sherlock Holmes: The Mystery of the Mummy lists (1 more)

View all Sherlock Holmes: The Mystery of the Mummy pictures (25 more)

madstalk
This adventure game, despite being released in 2003, felt more like something out of 1993. It had Myst-like graphics and controls making it woefully dated.

Lord Montcalfe, a well-known Egyptologist, is missing, believed by the police to have committed suicide. His daughter, Elisabeth, insists that he is still alive and calls upon her fiance's cousin, Sherlock Holmes, to prove her theories. Arriving at the manor, Holmes finds that Lord Montcalfe was suffering from a deep paranoia. It seems he had made a terrible mistake and triggered what he believed to be a mummy's curse. Trying to shield himself and others from that curse, he had booby trapped his own home with elaborate locks, some of which were designed to kill anyone who tried to tamper with them.

Holmes investigates mostly in solitary fashion without the aid of his normal sidekick, Watson. Other people in the game appear only in the cut-scenes. Puzzles become more difficult as the story progesses. Find illusive inventory objects and read many documents for clues as you search the secret passages and elaborately decorated rooms of the Montcalfe Manor. ... (more) (less)
Manufacturer: The Adventure Company
Release date: 22 February 2003
UPC: 625904390257
Tags: Adventure (2), Puzzle-solving (1), 2003 (1)
My tags:

José Lopes added this to list 3 years, 1 month ago