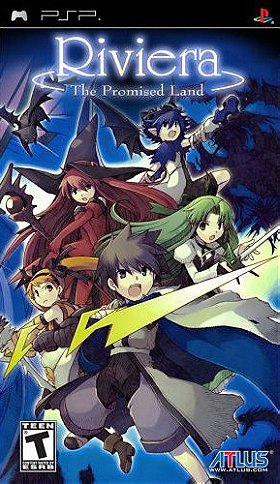 View all Riviera: The Promised Land pictures
Riviera - The Promised Land takes you into a world where gods are dead and demons are rising. Long ago, a war between gods and demons (known as Ragnarok) erupted, and the world was thrown into a state of chaos. Asgard, overrun by demons, was on the brink of destruction. In desperation, the gods broke an ancient taboo. Sacrificing their very lives, they created black-winged reapers that came to be known as Grim Angels. However, the gods were able to leave behind their power in the heavenly isle of Riviera. A thousand years later, the demons have returned. To fight them, heroes must seek out the power of the gods. ... (more)
Manufacturer: 505 Games
Release date: 10 July 2007
EAN: 8023171012766
Tags: Dept Of Heaven (1), RPG (1), Psp (1)
My tags:

redComicsar added this to owned list 2 months, 3 weeks ago

Gumtierl added this to wanted list 2 years, 6 months ago

Elusuariodiverso rated this 6/10 3 years, 6 months ago

colonywars added this to owned list 4 years, 8 months ago