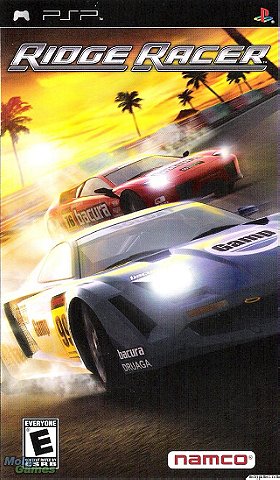 View all Ridge Racer pictures (12 more)
Ridge Racer is about speed and cool power sliding. The game features a nice selection of 24 tracks, 58 cars and music from all previous RR-games and in all aspects is faithful to the series' spirit. There are many game modes in the game, like a world tour-mode where player competes on the courses in order to earn new cars and tracks, Time Attack where one races around the tracks against time and also a multiplayer mode, which supports the ad-hoc, meaning that up to eight players can race against each other with only one game disc, with one player hosting, and others joining.
Manufacturer: Sony Computer Entertainment UK
Release date: 1 September 2005
Number of discs: 1
EAN: 0711719676454 UPC: 711719676454
Tags: Racing (2), Psp (2), Bruno (1), Carreras (1), Namco (1), 1P (1)
My tags:

Lildevil Jurinna added this to a list 3 days, 19 hours ago
My favorite Games on other Systems (20 games items)

AnarchySoldier rated this 9/10 2 years, 4 months ago

redComicsar added this to wanted list 2 years, 11 months ago

Elusuariodiverso rated this 8/10 5 years, 11 months ago