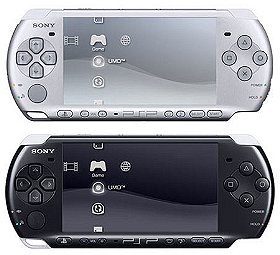 In comparison to the Slim and Lite, the PSP-3000 has an improved LCD screen with an increased color range, five times the contrast ratio, half the pixel response time to reduce ghosting and blurring effects, and anti-reflective technology to improve outdoor playability. The screen draws more current than the screen for the PSP-2000, initially causing a reduction in the console's battery life by "about 20 minutes" according to SCEA director of hardware marketing John Koller. However, he released a statement retracting this comment, saying that, "the screen of the new PSP draws a little more power" but he claims that, "our engineers in Japan worked to reduce the power consumption of the overall system including its components." It has an integrated microphone, the goal of which is to establish the PSP as "a viable communication device" according to Sony Europe boss David Reeves. PSP games will now be playable on interlaced televisions via composite video cables. The start and select buttons have changed from semi-circles to ovals, with the home button being replaced by a "PS Button" similar to the PS3's DualShock 3. Sony also announced a firmware update.

The PSP-3000 will come in one limited-edition bundle in North America. It is the Mystic Silver PSP-3000, Ratchet & Clank: Size Matters, the National Treasure 2: Book of Secrets UMD movie, a 1GB Memory Stick Pro Duo and a voucher for a PS Store download of Echochrome.

In Europe the console will be released in eight different bundles. It will retail for €199 in the Eurozone and £149 in the UK.

So far the PSP-3000 has been deemed "unhackable", and custom firmware needing a Pandora Battery cannot be installed on the PSP. The leading developer of custom firmware, Dark Alex, states that the PSP will not be exploitable in the same manner as previous PSP iterations due to new hardware installed in the system. The PSP-3000 can be "hacked" by switching out the CPU for the PSP-3000 with the PSP-2000's CPU, although with the PSP-2000 CPU the PSP-3000 cannot use some features, including the use of the brighter screen. One would have to use the T.V. output feature to see visual output. ... (more) (less)
Release date: 14 October 2008
Tags: Sony (1), PlayStation Portable (1)
My tags: