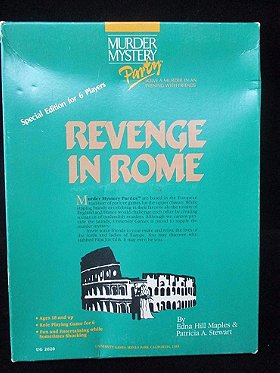 Jeffrey Warrington Glik: The son of the deceased. Dad's death
put a cloud over his honeymoon.

Annie Oatman Glik: The wife of Jeffrey and daughter of Peter and Dorothy Oatman. She married Jeffrey, but knew his father only too well.

Peter Allen Oatman, III: He is the father of Annie. He and the deceased were college roommates. How does he feel about the marriage?

Dorothy Oatman: She is the wife of Peter. Dorothy is the devoted
All-American wife back home. Now she is in Italy...

Hal Wright: Young, aggressive attorney in Joseph Glik's, law firm. When he is present everything is "Hal Wright now."