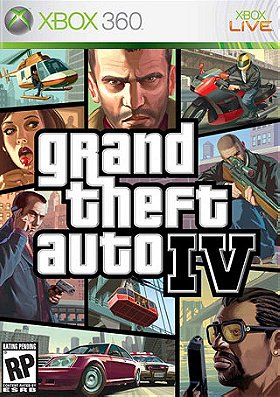 Moz La Punk
4 votes
Critics are hailing the release of Grand Theft Auto IV as the second coming of Christ. Big fat tens all around and hardly a spot of complaint around. Fair? Yes and no. Like almost any other game out there, GTA IV still has stuff to dislike, although of course the good outweighs the bad easily. With the 360 version in my console for the past few days, it’s time for my impressions and I’m going ... read more

Perhaps Here, Things Will Be Different

Loyal-T
3 votes
The "Grand Theft Auto" videogame series has been one of the most celebrated, as well as one of the most politically scrutinized, game series' of all time. Its level of violence, sexual and public misconduct and, later, profanity raised the bar for what was acceptable in an "M"-rated videogame.

GTAIV better then ever

John E.
1 vote
Grand Theft Auto one of the best selling series out there and I have played them all and have not been disappointed. Grand Theft Auto IV is finally here and does not fail to disappoint Rockstar North in Scotland have really done their best to make sure that this game is top quality which it is. Grand Theft Auto has taken a big change for once this game looks, feels and plays realistic.

Grand Theft Auto IV is played from a third-person perspective in an open world environment, allowing the player to interact with the game world at their leisure. The game is set within the fictional state of Liberty City, which is heavily based on New York City. The single-player story follows Niko Bellic, a veteran of an unnamed war in Eastern Europe who comes to the United States in search of someone important, but quickly becomes entangled in a world of gangs, crime, and corruption. An online multiplayer mode is included with the game, allowing up to 16 players to engage in both co-operative and competitive gameplay in a recreation of the single-player setting. Two expansion packs were later released as downloadable content for the game, The Lost and Damned and The Ballad of Gay Tony, which both feature new plots that are interconnected with the main Grand Theft Auto IV storyline, and follow new protagonists.

Development began shortly following the release of Grand Theft Auto: San Andreas. Upon its release, the game was acclaimed by many reviewers who praised its story missions, setting, and updates from previous games in the series. A commercial success, Grand Theft Auto IV broke industry sales records by earning US $500 million in the first week of its release.

The closest thing to live in a parallel world.

“Oh, finally a real gaming experience that allows you to be a mafia member. The setting, music, situations, and even graphics really make you a part of the whole experience.You get to explore the sandbox world of the game while getting into dangerous missions that include mobsters, criminal missions, and you even have time for your personal life.This is a great experience that demonstrates that new millennium systems capacity to recreate a parallel universe that will transport you in a parallel life to say something...Maybe I'm over praising this video game but believe me, until you play it, you will understand the whole experience...

The Cinephile added this to a list 5 months, 3 weeks ago
Open World Games: Ranked (30 games items)

The Cinephile added this to a list 5 months, 3 weeks ago
Rockstar Games: Ranked (7 games items)

rickterenzi voted for an image 1 year, 6 months ago

Georgini voted for an image 1 year, 6 months ago

Defenestrated Jack voted for an image 1 year, 6 months ago

Armando Makyller Zapata Cortés added this to a list 3 years, 6 months ago

blondskate added this to a list 3 years, 8 months ago

The Cinephile added this to a list 4 years, 4 months ago
5-Star Video Games (24 games items)

Mies added this to a list 4 years, 9 months ago
Favorites (Games) (71 games items)

walterwhite added this to a list 4 years, 12 months ago
Games i want to play (30 games items)

simplezombie added this to a list 5 years, 3 months ago

hsallinen added this to a list 5 years, 7 months ago

"I had Xbox 360 for a few years because PS3 was so expensive at the time. But I really didn't own that many games on it and also I didn't play that much at the time (alcoholic beverages, movies and friends took much off my free time then), I had several Fifa and NHL games but besides them I only bought GTA IV and Dead Rising. I mostly borrowed games from a friend until the system fried itself while I was serving my conscription in the military. But I played this game through few times and later "

Miia added this to a list 6 years, 3 months ago
Game Collection (99 games items)

megamancheese added this to a list 6 years, 4 months ago
My Current Xbox 360 Collection (117 games items)

Andy Quill added this to a list 6 years, 5 months ago
Videogamus (161 games items)