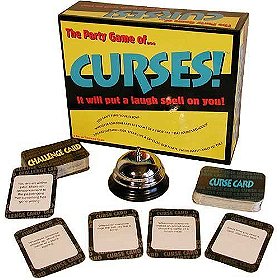 The curse cards are played on other players and force them to continually perform certain actions, such as barking like a dog whenever the player to the right reads a card or hold on to the card with both hands at all times. If another player notices that you are not performing your action, you "break the curse" and turn it face down in front of you. In fairy tales, breaking a curse is a good thing, but not in this game. When you break three curses, you are eliminated from the game, although you are still available to have actions performed on (such as "The other people in the room are electrified. Each time you contact one of them you get a big shock.")