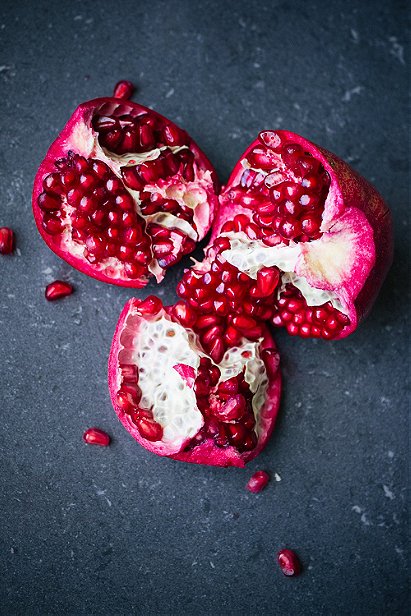 In the Northern Hemisphere, the fruit is typically in season from September to February, and in the Southern Hemisphere from March to May. As intact arils or juice, pomegranates are used in cooking, baking, meal garnishes, juice blends, smoothies, and alcoholic beverages, such as cocktails and wine.

The pomegranate is considered to have originated in the region of modern day Iran, and has been cultivated since ancient times throughout the Mediterranean region and northern India. It was introduced into Latin America and California by Spanish settlers in 1769.

Today, it is widely cultivated throughout the Middle East and Caucasus region, north Africa and tropical Africa, the Indian subcontinent, Central Asia, and the drier parts of southeast Asia. It is also cultivated in parts of California and Arizona. In recent years, it has become more common in the commercial markets of Europe and the Western Hemisphere

omnivorousrex rated this 7/10 1 year ago

psychofaerie added this to Liked list 2 years, 2 months ago

Eleanor added this to Liked list 5 years, 6 months ago

Nusch added this to a list 5 years, 8 months ago

"Pomegranate is native to a region from Iran to northern India. Pomegranates have been cultivated throughout the Middle East, South Asia, and Mediterranean region for several millennia, and also thrive in the drier climates of California and Arizona. Carbonized exocarp of the fruit has been identified in early Bronze Age levels of Jericho in the West Bank, as well as late Bronze Age levels of Hala Sultan Tekke on Cyprus and Tiryns. A large, dry pomegranate was found in the tomb of Djehuty, the b"