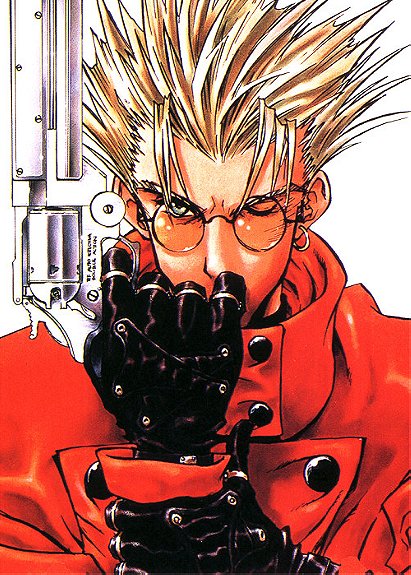 View all Vash the Stampede pictures
Vash the Stampede is the main character of the anime and manga series of Trigun created by Yasuhiro Nightow. He is a Plant: an inter-dimensional being tapped as a source of power and energy. Being so gives him superhuman powers and a capability to destroy cities—thus acquiring the name The Humanoid Typhoon due to the destruction and chaos which surrounds him, and subsequently The $$60,000,000,000.00 Man because of the price on his head. He travels from town to town, keeping the peace and teaching townsfolk the value of pacifism.
The character was well-received both for his personality and his two trademark items of clothing: yellow sunglasses and red duster trench coat. He was ranked #2 in the 1998 Annual Anime Grand Prix Male Character Category.

venomu added this to a list 6 months, 1 week ago
Favorite Characters (19 characters items)

StealthRUSH rated this 10/10 3 years ago