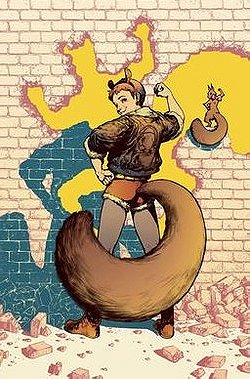 1 vote
View all Squirrel Girl pictures (20 more)
Squirrel Girl, real name Doreen Green, is a fictional character and superheroine in the Marvel Comics Universe. Her first appearance was in Marvel Super-Heroes vol. 2, #8, a.k.a. Marvel Super-Heroes Winter Special (cover-dated Jan. 1992), in a story plotted and drawn by Steve Ditko and scripted by character conceptualizer Will Murray. Her ability to control squirrels is surprisingly effective and has allowed her to defeat major supervillains. She was a member of the Great Lakes Avengers for much of the duration of that group, and later began serving as nanny to Danielle Cage, the daughter of Luke Cage and Jessica Jones.
Squirrel Girl's creation and inspiration came from Will Murray wanting to cut loose from the serious drama of the X-Men titles and bring back the light-hearted anything-goes joy of comic books.

OneSpiderClone rated this 1/10 2 years, 7 months ago

upgradeslinky rated this 1/10 4 years, 7 months ago

Rylvan posted a image 5 years ago

Rylvan added this to a list 5 years, 2 months ago
Favorite Characters (440 characters items)