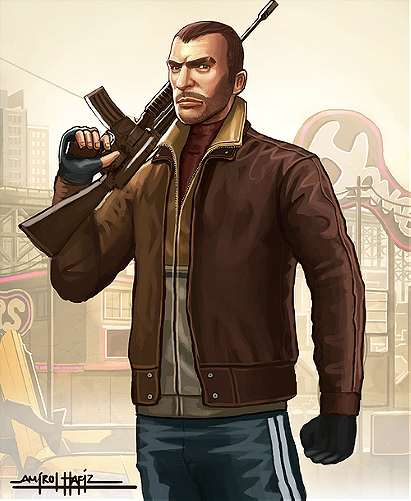 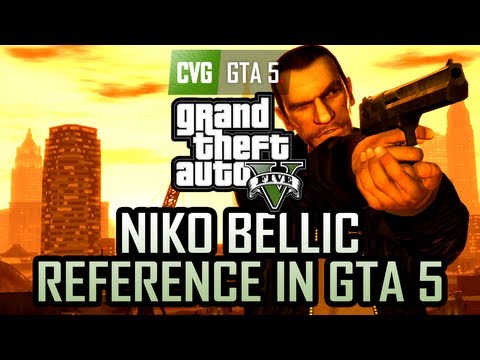 Niko is a soldier from Eastern Europe who moved to Liberty City to escape his troubled past and pursue the American Dream. Niko was persuaded to move by his cousin Roman, who claimed to be living a life of luxury, with beautiful women, sports cars and lots of money. It soon becomes apparent, however, that Roman lives in squalor, he runs a failing taxi business and has mounting debts to various criminals from Liberty City's underworld, who have put a price on his head. Unaware of Niko's violent past, Roman had lied to convince his cousin to move to the city, not knowing that Niko would fight against his pursuers, and eventually be the one to turn his lies into a reality. It is also stated that Roman is motivated partially by his desire to see his cousin again. Niko, however, has underlying motivations for moving to Liberty City, which are revealed as the story unfolds. Although he is the main protagonist in only the original game, he also appears in The Lost and Damned and The Ballad of Gay Tony.
Niko's nationality is never specified in the game. Niko's nationality has been a subject of some debate: prior to the game being launched, it was believed by some that he was Russian and articles have interpreted the character as being from Croatia or Serbia. Executive producer Dan Houser spoke on the matter saying that Niko is "from that grey part of broken-down Eastern Europe", suggesting that Niko's nationality was left intentionally vague or to the interpretation of the player.

Niko's father was a violent alcoholic, who physically abused him, his mother and elder brother. Niko's mother, Milica, who possessed a maternal and caring nature, regretted that her sons were forced to endure such hardships as children, since Niko and his brother grew up during the difficult times of the Yugoslav Wars. His elder brother was killed in action in the war, a war in which Niko participated as an enraged youth. Niko witnessed numerous atrocities during the war, including the murder and mutilation of over 50 men and women, which led to his cynical view on life, with certain degrees of anger, regret, emotional distress and severe depression. A defining moment in the war for Niko was when his army unit of fifteen young men from his village were ambushed by the enemy. Niko barely escaped the ambush, and weeks later concluded that the unit had been betrayed by one of their own soldiers, so he returned to the pit where his friends were buried. He dug up the bodies, counted them, and identified each of the corpses. From this he learned there were two other survivors: Florian Cravic and Darko Brevic. Niko vowed to search for the perpetrator, motivated not solely by revenge, but a need for closure and to move on with his own life. Niko would eventually discover that Florian Cravic, one of the two survivors of the ambush, was also residing in Liberty City. Despite this, Niko possesses certain skills which were acquired during his early army training, such as close quarter combat, slight helicopter piloting, shooting and swimming.
By the end of the war, Niko experienced difficulty finding work and leading a normal life in the former Yugoslavia. His cousin Roman decided to settle in the United States, in order to lead a new life in Liberty City before the war. Niko, knowing only violence, turned to the Balkanic criminal underworld for the following ten years, while at the same time trying to search for the two other men who survived the ambush. After being released from a brief stint in prison, Niko joined a smuggling and trafficking ring run by Russian criminal Ray Bulgarin.
During one smuggling run into Italy, the boat that Niko was working on sank in the Adriatic Sea a mile from the nearest shoreline. Niko managed to abandon the ship and swim to safety, however everything else placed on the ship was lost beyond salvaging. Bulgarin accused Niko of escaping with the money on board. Although Niko denied the accusations, Bulgarin refused to believe him and he was too powerful to argue with, so Niko joined the merchant navy in order to flee from Bulgarin. He spent the following seven months at sea in the Atlantic Ocean, befriending the crew of the Platypus and contemplating Roman's request for him to come to Liberty City. Roman had been asking Niko to come to Liberty City to share his lavish life of a mansion, a sports car, money and beautiful women, which Niko desired and perceived as a "break". Niko was also motivated to come to Liberty City in order to locate Florian Cravic and evade Bulgarin.

WillChangeTomorrow rated this 8/10 1 year, 2 months ago

nofinalaccount rated this 9/10 2 years, 9 months ago

browser voted for an image 4 years, 4 months ago