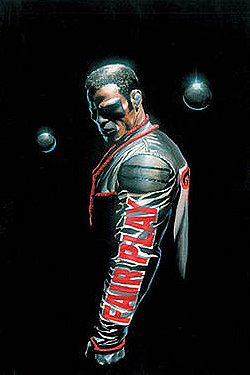 At a young age, Michael Holt showed remarkable intelligence, reading and assimilating the works of Bohr, Einstein, Planck and Feynman, the pantheon of theoretical physics, at the age of six. He studied advanced science, space, and time "while other children struggled through Sesame Street". Michael grew up with his mentally challenged older brother, Jeffrey, whom Michael loved dearly. When Jeffrey died at the age of 15, Michael was devastated.

Holt displayed "a natural aptitude for having natural aptitudes", as he called it, easily picking up and retaining complex skills and abilities that other men spent their entire lives perfecting. Before he began his career as a superhero, he already possessed 14 Ph.D's (two in engineering and physics—including doctorates and masters degrees in law, psychology, chemistry, political science, and mathematics), was a self-made multi-millionaire with a high tech firm called Cyberwear (subsequently sold to Waynetech) and was a gold medal winning Olympic decathlete.

The accidental deaths of his wife and unborn child were a devastating blow to Holt and while contemplating suicide, he was met by the Spectre, who told him about Terry Sloane, the Golden Age superhero known as Mister Terrific. Inspired by Sloane's life story, he took the name Mister Terrific and later joined the current Justice Society of America, eventually serving as its chairman.