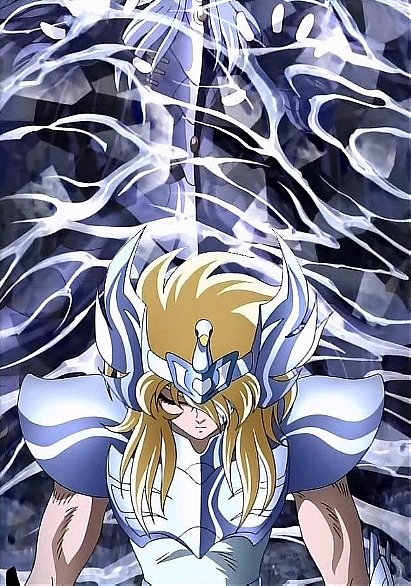 View all Cygnus Hyōga pictures (7 more)
Cygnus Hyōga, also known as Swan Hyōga in several international adaptations, is one of the main characters in Kurumada's manga. He is the Bronze Saint of the Cygnus constellation and was born in the fictional village of Kohoutek, in eastern Siberia, which, at the time when Kurumada wrote and drew his manga, was in the Soviet Union. His mastery over his Cosmo grants him superhuman talents, including the ability to create ice and snow at temperatures as low as absolute zero, by stopping subatomic particles. Hyōga is often portrayed wearing a cross and rosary of the Northern Cross, another name for the constellation Cygnus. Calm by nature, he displays a seemingly emotionless exterior, but a more tender side of his character emerges on occasion, such as his deep gratitude to Andromeda Shun for having saved his life and his undying devotion to his mentor Aquarius Camus. In Japan, Hyōga is a popular character, ranking second in the main character polls of the Bronze Saints.

WillChangeTomorrow rated this 6/10 1 year, 6 months ago