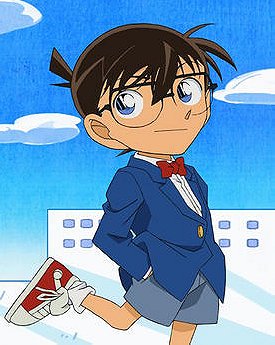 1 vote
View all Conan Edogawa pictures
Conan Edogawa (江戸川 コナン Edogawa Konan?) is the alias used by Shinichi Kudo in his shrunken form. Shinichi took the appearance of his six or seven year old self after being exposed to a prototype poison called APTX 4869, which he had been forced to swallow by two men in black later revealed to be members of the Black Organization.[3] The poison deaged Shinichi's entire body except for his nervous system and therefore he still has the personality, memories, and incredible deductive ability of his teenage self. Conan's goal is to hunt down the Black Organization and have them arrested for their crimes, as well as find an antidote to the APTX 4869. To do so he plans to make the washout detective Kogoro Mouri famous in hopes of attracting cases related to the Black Organization.