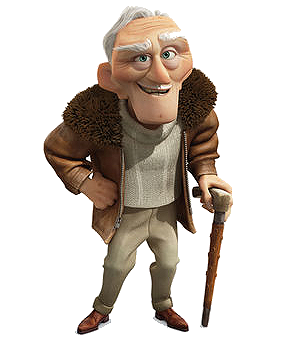 View all Charles Muntz pictures
Charles F. Muntz is the main antagonist in Pixar's film Up.

He is an explorer, obsessed with finding the beast of Paradise Falls ever since he was accused of fabricating its skeleton by the National Explorer's Society and stripped of his membership. He then vows to find the bird and catch it to prove it is real. He travels in a dirigible called the Spirit of Adventure, and has many canine minions who wear collars that allow them to speak.

When the heroes of the story meet him years after he departed to capture the beast of Paradise Falls, they find he has gone insane, killing innocent people he thought were going to steal the bird. Soon, with Kevin, a light appears and Muntz tells his dogs to get him and Kevin got captured by him. Since, in the final battle, Carl was fighting him with his cane and he uses his sword and then, he didn't kill the heroes. Carl and Russel trick him into going into the house, Carl sends the house floating away and when Muntz realizes he's been duped he leaps out of the window trying to get back to his airship, but his foot gets tangled in balloon strings and they snap and he falls thousands of feet below to his death.

WhiteGhost rated this 8/10 11 months ago

Providence posted a image 1 year ago

Krankenhaus added this to Rated list 2 years, 4 months ago

OneSpiderClone rated this 8/10 2 years, 7 months ago

upgradeslinky rated this 1/10 4 years, 1 month ago